BeiKazu is the het ship between Beidou and Kaedehara Kazuha from the Genshin Impact fandom.

In Kazuha's Voiceline about Beidou, Kazuha tells that he owe Beidou his life because she took him in when he fled from Inazuma. And gave him the courage to return there at the most difficult time of his life. Kazuha mentions that she's a comrade in whom he and all the other sailors can place their trust.

In Beidou's Voiceline about Kazuha, Beidou calls Kazuha 'scallywag' and was surprised that Kazuha blocked a strike from the Raiden Shogun, saving the Traveler. After the battle, she mentions that he'd voyage with the Crux Fleet for a while longer, she was more happy to oblige. Once the day comes when he sets off again by himself within the next stage of his journey. She will send him off with a drink.

Within Kazuha's Character Details, it's said that Beidou, ever judge the good character. Could not tell that Kazuha could wield a sword with the skill of a seasoned warrior when she took him in. And in Kazuha's first story, when Kazuha was first on board, Beidou, told her crew that he's gonna stay with them for a while, and then told them to take care of him.

The two can first be seen as Kazuha rhythms from his haikus, as Beidou listens she laughs and tells Kazuha about the risks of taking Kazuha in as he's a fugitive from Inazuma. Kazuha explains to Beidou that they shouldn't waste the moonlight until a battle occurs, until mentioning to Beidou that a bottle of sake (alcohol) would make things much better. Confused, Beidou asks what he meant about the battle, he then explains to her about that night when the vision hunters were hunting Kazuha.

“I owe Beidou my life. She took me in when I fled from Inazuma and gave me the courage to return there at the most difficult time of my life. She is a comrade in whom I and all the other sailors can place our trust.”
— Kazuha's voiceline about Beidou

“Kazuha? That scallywag actually blocked a strike from the Raiden Shogun outside Tenshukaku! Easier said than done... After the battle he came to the Crux Fleet — said he'd voyage with us a while longer. I was more than happy to oblige. If the day comes when he decides to set off again by himself on the next stage of his journey, I'll send him off with a drink, haha...”
— Beidou's Voiceline about Kazuha

Kazuha – “You're going to trust me, despite my being from Inazuma... My mind is like the wind on the waves — it can change in an instant.”
Beidou – “Kid, I think I got you figured out”
Kazuha – “Oh, in that case... you saw this coming?”
— Kaedehara Kazuha: Wandering Winds

BeiKazu unexpectedly gained traction despite the fact that Beidou is more popular in femslash ships, including one of the famous ones in the western fandom. Therefore, those that don't ship the pair prefer them as platonic. For instance, they depict Kazuha as the adopted son of Beidou and Ningguang, due to Kazuha's popular reading as a Beidou's adopted son and the similarity of his appearance to both women. On the other hand, the appeal of a young male and an 'oneesan' relationship draws in those that like the dynamic. In summary, the pairing is flexible and can be interpreted as both romantic and platonic, thus serving as a win-win for both sides.

Along with Beiguang, this ship currently rivals KazuScara and TomoKazu. 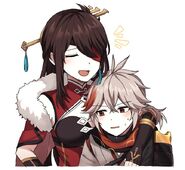