Bellamione is the femslash ship between Bellatrix and Hermione from the Harry Potter fandom.

Bellatrix and Hermione have limited interactions in the series. Bellatrix is a Death Eater, and so on the opposing side of the Battle of Hogwarts. Their interactions are antagonistic. Bellatrix despises Hermione for being a muggleborn.

The trio hunt for Voldemort's Horcruxes, but during the hunt are captured by Snatchers and are taken to Malfoy's Manner. As the Malfoy's converse, Bellatrix enters, stares right at Hermione and asks if it is indeed the mudblood. After they confirm their identities, Bellatrix sends Harry and Ron to the cellars as prisoners but keeps Hermione behind to torture. She uses the Cruciatus curse on Hermione, attempting to gain information on Godric Gryffindor's sword and how she attained it. Despite the curse, Hermione managed to lie, and her body is left on the ground. Harry and Ron come to her aid, but Bellatrix threatens Hermione with a knife to her throat, and so Harry ceases. She eventually releases Hermione, after a chandelior falls from the roof of the house, and they escape. In the film version, Bellatrix carves the word mudblood into Hermione's arms.

Hermione later used a hair from Bellatrix and brewed a Polyjuice potion. This was used so she could sneak into Gringotts, pretending to be Bellatrix. In the Battle of Hogwarts, Bellatrix duelled Hermione, Ginny Weasley, and Luna Lovegood all at once, and was an equal match. Hermione duelled with Bellatrix's own wand.

Bellamione is a less popular ship in the fandom, but is one of the more well-known femslash pairings in the Harry Potter fandom. It is also a controversial ship, since canonically Bellatrix tortures and abuses Hermione, and some fans dislike the romanticizing of abuse of their relationship. Hence, fanfics of Bellamione are often darker, often having both Hermione and Bellatrix as villains, or instead a redemption arc for Bellatrix (their age difference is usually changed in the fanfics as well). Fans of Bellamioine often cite parallels between the two characters. Some even view Bellatrix as a darker counterpart to Hermione. 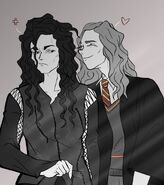