Once Upon A Time
Frozen
Beauty and the Beast

Belsa is the femslash ship between Elsa and Belle from the Once Upon A Time, Frozen and Beauty and the Beast fandoms.

Elsa meets Belle in Storybrooke as they look for clues that could help Elsa find Anna. As well as some clues about how they and the others can help stop Ingrid. Belle uses the Dark One dagger to make Mr. Gold tell Elsa what he may know about Anna, in order for Belle to help Elsa as they begin their search for Anna. As their search for Anna doesn't bring them any results, Belle tells Elsa that they should give up and focus more on Ingrid. But Elsa explains how important Anna is to her. So, understanding where Elsa is coming from, Belle continues to help her.

When Elsa was beginning to believe that their search for Anna was getting to be pointless, Belle encourages her to not give up. And Belle also reminds Elsa that the heart beat she felt from Bo Peep's staff confirmed that Anna is alive and that she shouldn't give up. Elsa then consults with Belle about what the Snow Queen had told her about Anna sealing her in the urn. Belle tells Elsa that it wasn't true and thinking that Belle is trying to make her feel better by saying that, Elsa asks her to not do it. But Belle assures her that she is being honest. Elsa, on the other hand, wasn't having it and tells Belle that because she doesn't know Anna she couldn't possibly know what might have run through Anna's head that day.

Belle, however, did know Anna from when she had visit Arendelle long ago. But she doesn't inform Elsa of this and instead uses the things that Elsa has told her of Anna and their bond to reassure Elsa that what might had caused Anna to act in that way wasn't her doing. Elsa's stolen memories, however, make it hard for her to believe Belle. Before Belle leaves to take care of something, after Elsa's fading hope gets her to tell Belle that she doesn't understand and has never been to Arendelle, Belle encourages Elsa to keep looking and that they will eventually find Anna. After Belle finds a mirror, she confesses to Elsa that Anna's disappearance is her fault.

Because of their brief encounters in Once Upon A Time and are Disney Princesses, the pairing has gained a following. There are fans who ship them either as their main Disney versions, or as their Once counterparts. Fans of the Disney side of the ship sometimes have Belle and Elsa in the modern, style clothes that the netizen versions of them wear in Ralph Breaks the Internet.

On AO3, the Disney side of the ship has over 22 fanfics about it. Most of the fanfics commonly have Belle helping Elsa with her ice magic or serves as a her voice of encouragement when it comes to Anna and life itself. While AO3 has little fanfics about their Once counterparts, Fanfiction.net does have 15 fanfics on the two in the ABC show, where some of them have Belle meeting or visiting Elsa in Arendelle or brings her back to Storybrooke. 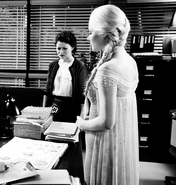