Bench Trio is the friendship between Ranboo, Tubbo and TommyInnit from the YouTube fandom.

The three boys are really close friends. Despite this, Tommy used to show his jealousy towards Ranboo, claiming Ranboo replaced him as Tubbo's best friend. After that, Tommy became friends with Ranboo and no longer showed jealousy.

Tommy made a TikTok of him crying with a photo of Ranboo and Tubbo in Minecraft in the background. It also had the text "Me when my best friend leaves me out and also hates me" along with "Somewhere Only We Know" by Lily Allen playing. On March 24, 2021, Ranboo duetted the TikTok, showing the letter L. The caption also said the letter L and nothing else. Tommy's TikTok is currently unavailable while Ranboo's duet is still available.[1]

On February 26, 2021, Tommy shared a photo of him and Tubbo on FaceTime and told Ranboo that they were talking about him, and most likely not saying very nice things.[9][10]

On February 28, 2021, Tubbo replied to a fanwork of Ranboo and Tubbo as a The Office screencap. He said that he and Ranboo were currently watching The Office and asked how the artist had done such witchcraft.[11] Tommy replied to Tubbo, saying that he missed the days when people would make The Office fanart of him and Tubbo. He then asked for such fanart to be made and requested that Ranboo was not in it.[12] Tubbo replied with "Yikes."[13] Tommy replied, seeming disappointed, with a screenshot of Tubbo tweeting that he would never replace Tommy.[14] Tubbo assured Tommy that the two of them were still besties.[15]

On March 3, 2021, Tubbo tweeted at the official South Park Twitter account that he liked their shows a lot.[16] Tommy replied that he knew and that Tubbo should stop going on about it. He proceeded to tell Ranboo that he was pals with Tubbo and that Ranboo should go to a separate voice chat.[17] Tubbo replied that Tommy was not pals with Ranboo, but he himself was.[18] After Tubbo and Tommy discussed TV shows they wanted to watch, Tubbo mentioned that Ranboo should be better friends with him and Tommy.[19]

On June 11,2021, Tommy replied to one of Tubbo's tweets, asking him to stop tweeting about Ranboo and Clash of Clans.[20]

On June 21, 2021, Tubbo apologized for being missing in action because he had been filming vlog stuff with Tommy. He then mentioned that Ranboo would arrive in England in an amount of hours and he couldn't wait.[21]

There is plenty of fan art of the trio together, typically relating to the Dream SMP. Many people dislike the Bench Trio as a poly ship because both Tubbo and Tommy have stated that they are not okay with being romantically shipped with each other. Although, Ranboo has stated that he and Tubbo were unsure of their boundaries with being shipped together romantically. In addition, Tommy referred to Ranboo as "Motherboo" in one of his TikToks[22], which is another reason why people don't ship the Bench Trio as a poly ship. Regardless, barely anyone ships the Bench Trio romantically. Although, most of the fandom approves of the friendship between the three.

The trio was formerly referred to as the "Manipulated Minors" by some fans because of how they were all manipulated by Dream in the Dream SMP roleplay. Some included Purpled because he was also a minor and was manipulated by Quackity in the roleplay. However, the term became less used as Ranboo and Purpled turned 18 on November 2, 2021 and October 24, 2021 respectively. The term also became outdated as Eryn, a minor, joined the Dream SMP and made it so that Purpled, Ranboo, Tommy and Tubbo were not the only minors on the server.

On Twitter, people are apart of "benchtwt," a subtwt in which people are interested in the Bench Trio. Fans create academies with houses and uniforms for some subtwts. An academy has been created for benchtwt, using the hashtag, #benchtwtacademy. The Tumblr counterpart is called "benchblr." 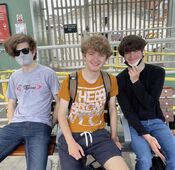 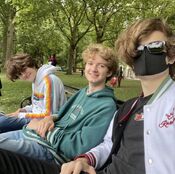