Childhood friends/Comrades; Unrequited Feelings on Bertolt's Side; Bertolt is dead

BeruAni is the het ship between Bertolt Hoover and Annie Leonhart from the Attack on Titan fandom.

Bertolt and Annie were both Warriors from Marley, and Bertolt developed romantic feelings for Annie. It is unknown whether Annie knows about this. The two, along with Marcel and Reiner, are sent to Paradis to retake the Founding Titan. After Marcel is eaten, Bertolt and Annie run away, behind Reiner. When Annie and Reiner fight, Bertolt wants it to stop, and he is seen crying. After, Annie starts to go home with him, although Reiner grabs her and chokes her.

After Wall Maria is taken down, and the three take refuge in a small house, they talk about joining the military. When Annie suggests marrying one of the men inside Wall Sheena and gathering information, Bertolt says that she couldn't do that, to which she agrees. She then remarks that she has no charm to seduce a man, although Bertolt, flustered, tells her that's not true.

A few years later, after Annie is already crystallized and Bertolt and Reiner's identities have been discovered, Reiner teases Bertolt about his feelings for Annie, and tells him that he should confess when they successfully capture Eren. Later, when Armin is trying to convince Bertolt to come out with Eren, he mentions Annie and lies about her being tortured. This causes Bertolt to lash out. He does seem to believe this fact, and mentions it to Zeke, although Zeke says that she's probably just practicing her kicks somewhere.

Four years later, when Annie is in dire state while she fights against the Nine Titans throughout history on Eren's back, Bertolt saves her and she looks up at him.

In the Junior High Manga, Bertolt and Annie are childhood friends. Bertolt has an enormous crush on Annie, and everybody in class knows about it because of his long stares during lectures. As Ymir and Reiner argue about who is going with who to the festival, they both turned to Bertolt to ask what he thinks, but he wasn't listening because he was staring at Annie. Reiner and Ymir then had an idea and told Bertolt to ask Annie out to the festival.

When Reiner forgets his bag in class, and Bertolt has to wait for him, he spots Annie, who is standing at the window. When he makes a noise, Annie turns around. Bertolt, trying to brush it off, meows, to Annie's surprise. He then goes to her and apologizes, as he was practicing cat calls. She then retorts that he's not very good at it. Annie offers to do a sparrow's imitation, and he agrees, being extremely excited. As she barely starts, Bertolt's nose starts bleeding and he falls to the ground. Annie, worried, kneels down to him and tells him that she isn't finished.

After Ymir's date with Annie, Ymir sells her purikura picture to him, and he quickly accepts it. 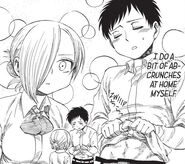