Blight Twins is the family ship between Emira Blight and Edric Blight from The Owl House fandom.

Emira and Edric Blight are the older children of the Blight family and because the twins enjoy causing trouble and creating chaos whenever they can through pranks, their parents focus their attention on their younger sister, Amity. Who rats her older siblings to their parents whenever she catches the twins doing something they shouldn't, while their mothers views the twins as a second thought for not meeting her standers and does what she can to ensure that Amity does. This gives the twins to feel some freedom and joy through their pranks, as long as their parents know nothing about them. Even though the twins are the oldest siblings in their family, they act childish and rarely act like adults, but their sister has brought that later side out of them from time to time.

When the two finally had enough of Amity being on their case and telling their parents on them, Emira and Edric decide to teach their sister a lesson that will take her off their backs. By getting their hands of the diaries that Amity keeps in her secret room at the library, and exposing Amity's secrets. Once they saw the human girl that Amity wasn't fund of, the Twins decide to gain Luz's trust so they can rope her into their plan. Because the library is closed due to the night of the wailing star, the twins knew that it will be fun to get their hands on Amity's secrets when the said star's magic brings the library's books to life. After having some fun through the brought to life words and images within the books and learning that they can alter the book's characters by drawing on them, they left Luz in on their revenge plan. Before they found the diaries and get caught by Amity, Edric had Luz alter a character from the book that Amity reads to the kids, and it places both Amity and Luz in danger. While the twins had left to cause more trouble else where. Luz had thought that the twins were cool, but her option of them changed after she learned of their plan.

"Adventures in the Elements" reveals that Emira and Edric have learned what their actions had planed Amity in danger, and start to become over protective of their sister to show her that they are sorry. That is why they journey to the knee with Amity as they over see her training. The twins continue to tease their sister in front of Luz, as they can't help themselves. When the twins see Eda Clawthorne with snow in her mouth, it gets Edric to put some in his mouth but Emira knocks the snowball out of his hands before his tong could make contact with it. As Amity works on her new spell, Emira and Edric prepare dinner of her, mostly Emira as Edric had found a bat. Emira agrees with Amity that Edric shouldn't eat the bat, while Edric begins to beg his sisters to least let him keep it as a pet, before Emira and Amity begin to chase him in order to make him release it. Emira and Edrics' lives are later placed in danger when Luz accidently angered a nearby slighter beast, that the Blight Twins find cute and want to keep it as a pet. As they try to capture the creature, however, the two end up being captured by slighter beast beside Eda. Who made plans to escape while the beast begins to eat the twins, but Luz and Amity mange to save them before it could. Emira helped Amity to save her and Edric by giving her the words she needs to hear to pull the new spell off. After everyone was safe, the twins over hear Luz and Amitys' plans for a book club and decide to tell everyone about it.

When the Blight Twins learn that Amity needs their assistance to help Luz in "Enchanting Grom Fright," they begin to use their illusion magic to help Luz prepare for her battle with the Grom. As Luz has offered to take their sister's place so she couldn't have to face her worse fear. This has Edric revealing that his worse fear is of "being alone forever" while Emira's is being stuck with Edric forever, indicating that Emira does find her twin brother to be annoying to always be around but still cares about him. At Grom Nite the twins had dates but both of them end up being stood by them.

When their parents were trying to gain investors for their latest Abomination creation in "Escaping Expulsion", the Twins were left in charge of showing their guests, while secretly leaving "hex me" notes on their backs for fun. When the twins learned that Amity, Gus and Willow need to save Luz from their parents' creation, they offer the three their help as long as Amity doesn't tell their mother that they did. Along with summoning "Hex me" notes on their back for a laugh, but end up having those notes thrown back at them as Amity knows Emira and Edric well enough to know that the twins can't help themselves when it comes to pranks.

The Blight Twins are one of the main canon family ships in the The Owl House fandom, next to the Blight Siblings, Clawthorne Sisters and the semi-canon Owl House Family, as fans fall in love with the twins that they find funny and entertaining; when it comes to the Blight Family. Because of their pranks and are twins from a world of witches and magic, some have compared the Blight Twins to the Weasley twins from Harry Potter. Their sibling bond sometimes has fans feature the two in the same poly-like ships, like Luzblights and Goldblights, from how both twins have been paired up with Luz and the Golden Guard. Even after their true appearances were revealed in "Reaching Out," it didn't stop fans from liking the twins. As it is their characters and the way that the two have looked out for their sister in season two, is what draws fans to them and their twin bond.

On AO3, the siblings currently have 118+ family/gen works. Tumblr and DeviantArt is also filled with drawings and screengrabs of the twins. After "Reaching Out" aired it inspired a few fans to focus their fanwork on the Twin's true appearances. Just as "Labyrinth Runners" has fans focusing on their new Hexside colors when the two joined the multiple tracks. 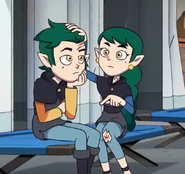