Never Met (Outside of BB:CTB)

Blood Rose is the het ship between Ruby Rose and Ragna the Bloodedge from the RWBY and BlazBlue fandoms.

In the RWBY Episode of BlazBlue: Cross Tag Battle Ruby meets Ragna after Es turns on her. After Ragna makes it clear that he doesn't want to fight her, they team up to get answers out of Es (which the voice calls a tag-gagement), but not before Ragna taunts Ruby by calling her a brat. After the fight, the voice who had been supervising the tournament transforms the keystones Ruby had been chasing to their true form. This sent out a wave of energy and Ragna shields Ruby from the attack. While Ruby remains unharmed, Ragna ends up getting injured in the process.

When the rest of team RWBY arrive, Ruby has Blake and Yang protect Es and Ragna while she and Weiss fight the voice. Ruby tells Ragna that he's not pathetic for needing protection since he protected her and that she is just returning the favor. Hearing this, Yang thanks Ragna for keeping Ruby safe only for Ragna to scoff, saying that he doesn't need her thanks. The Persona 4 Episode of BB:CTB ending shows versions of Ruby and Ragna that have become integrated into the Persona 4 universe and they are now both going to the high school. In the verses mode, Ruby and Ragna have unique dialogue if paired together.

The intro, outro, and victory screen all have Ruby excitedly asking questions about Ragna's Bloodscythe, much to his irritation. Ruby and Ragna have never met in their respective canons, but they do share various similarity. They both wear red and black as their primary colors and use transforming scythes as weapons. They both also have oddly colored eyes related to supernatural powers (Ruby eyes are both silver and can disintegrate Grimm, while Ragna has one green eye and one red connected Azure Grimoire which allows him to channel powerful magics through Bloodscythe). While they both have siblings, Ragna's hate him, where as Yang adores Ruby.

Blood Rose is a rare pair in the RWBY and BlazBlue fandoms due to the two characters being from to separate franchises. Despite this, it does have a sizable following of its own. They were shipped together due to the sizable overlap in the fans of both franchises and similar motifs in their designs. Fans also want Ragna to find some happiness in his unrelentingly miserable life and believe Ruby would have a positive affect on him. The ship grew in size when BlazBlue: Cross Tag Battle was announced to be a crossover between, among others, BlazBlue and RWBY. 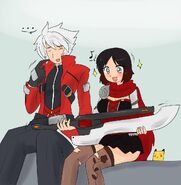 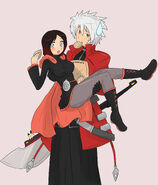