BokuAka is the slash ship between Kōtarō Bokuto and Keiji Akaashi from the Haikyu!! fandom.

Bokuto Kōtarō is a third-year while Akaashi Keiji is a second year at Fukurodani Academy, both being in the volleyball club. The two have many factors making them a strong canon pair: Bokuto being the team captain with Akaashi as the vice-captain; Bokuto being the ace/wing spiker and Akaashi's the setter and their jersey numbers, Bokuto's No.4 and Akaashi's No.5. These two have a close friendship with each other despite their contrast personalities: Bokuto being loud, childish and flamboyant while Akaashi's reserved, witty, blunt and more mature.

In his middle school, Akaashi's volleyball teammates had adequate skills, but they did not have a strong passion for playing. He received a recommendation from Fukurōdani Academy and had Fukurōdani and Suzumeoka as his choices for high school. However, after witnessing a high school match featuring Bokuto, his passionate attitude to volleyball impacted Akaashi, hence leading him to enroll into Fukurōdani Academy.

Throughout the series, Bokuto and Akaashi are mainly seen together, especially during practice. It's said that the rest of Fukurodani leave practice early to get away from Bokuto's never-ending spike practice. Only Akaashi's willing to stay and practice with him. In addition, when Bokuto's in his slumps, the rest of Fukurodani try and ignore him. Only Akaashi thoroughly thinks about the possibilities in how to bring Bokuto back to normal.

An attribute between them that is very distinct from other relationships is the incident of Bokuto's emo mode (also known as his dejected mode). This is when Bokuto gets depressed as something doesn't go as he planned, resulting in him curling up in depression. Akaashi is the only one fully capable of tending to Bokuto's moods - which is mentioned to be over 37 in total (and, yes, that's the highest number of concerns), all of which Akaashi has memorized. To top that off, during the final practice set against Karasuno during the Tokyo training camp, before Bokuto enters his emo mode, Akaashi sees that Bokuto's getting antsy to score, so in 0.5 seconds before he sets the ball, he calculates the 3 possible outcomes of the situation. Unfortunately, after giving Bokuto 2 sets, he gets a missed spike, resulting in Bokuto entering his emo mode.

During the MSBY Black Jackals vs Schweiden Adlers' game, Akaashi is seen cheering and being very proud of Bokuto, as he plays throughout the match. Even after the match, Akaashi complements Bokuto and even though their understanding of what being a 'normal ace' is, is different, Akaashi realizes this in 0.5 seconds and showers Bokuto in praise, in order for him not to get depressed. These two have a very strong relationship, even after high school.

“The idle fleeting thought that he was a 'star' crossed my mind.”
— Akaashi, when he saw Bokuto play for the first time, chapter 331

“We are the protagonists of the world.”
— Akaashi, about him and Bokuto, chapter 331

BokuAka is the most popular ship for both characters. Some fan work sticks to the canon, showing Bokuto in his emo mode/slumps while Akaashi finds a way to boost his spirit again. Another common topic is to link/draw the characters with owls, as in their school name, Fukuro means 'owl' and also Bokuto's hair does look like an owl.

It's very common in fics for them to be in college or post-graduation with jobs, with Kuroo Testurō and Kozume Kenma as their closest friends. Sometimes, instead of Kenma, Tsukishima Kei is involved, due to the events of Bokuto, Akaashi, Kuroo and Tsuki's personal training during the Tokyo training camp. Additionally, the fourth most-kudosed fic on AO3 is a Bokuaka fanfiction titled "In Another Life" by LittleLuxray. It is rather famous among Haikyu!! fans, even if they don't ship BokuAka.

After the release of Chapter 400, many fans have assumed that BokuAka is canon, as they say, "Akaashi called Bokuto his world!" and vice versa. So, many fans have strong beliefs about this. However, if you read the chapter carefully, Akaashi doesn't call Bokuto "his world", he says "World! Are you watching our ace?!" in the sense of pride for Bokuto. So there have been lots of controversies around BokuAka. 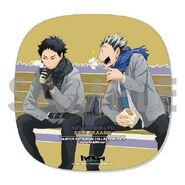