BonRin is the slash ship between Ryuji Suguro and Rin Okumura from the Blue Exorcist fandom.

Rin is one of the half demon-human children Satan, while Ryuji Suguro, who commonly goes by Bon, is from one of the temples that was attacked on the Blue Night, and because of what Satan had done to their loved one and the affects he has on their lives the two boys swore that they'll be the ones to defeat the Demon God once they become exorcists.

Rin first met Ryuji Suguro at his first day at Carm School, and because of Bon's hair style he confused the teen for a "rebel" and someone who doesn't take school seriously like he did, while Bon views Rin as a slacker who isn't taking his classes seriously. Which has him glaring at Rin in frustration during classes. They didn't properly talked to each other until sometime after Shiemi Moriyama joins their class, which has Bon accusing Rin of flirting instead of studying, while Rin was shocked that Bon got the highest score in their exams, as Bon shows Rin his sheet after telling him that he couldn't have done that bad if he tried and that he is disgusted of Rin flirting. After Rin tells Bon that it is impossible for a guy like him to get 98%, he gets annoyed by Rin's words before stating that he came to True Cross Academy to study in order to become an exorcist, like Rin is trying to do, which gets the two teens to argue with each other until Bon's friends and Rin's younger twin brother, who is also one of their exorcist teachers, grabs them away from each other.

After class, Yukio tells Rin, as well as Shiemi, who Ryuji Suguro is as the heir to the Venerable Temple in Kyoko and that Rin should take a few pointers from Bon when it comes to studying. As Rin and Shiemi construe to talk after Yukio left them, Bon sees them talking and accuses Rin of filtering with her again, which gets Rin to inform him that he isn't filtering and that Shiemi isn't his girlfriend when Bon smugly asked Rin if that was the case between him and her. Bon didn't believe Rin's stamen of there being nothing between them, which gets Rin to fight back when he calls Bon dory for always hanging out with Konekomaru Miwa and Renzo Shima like they are his flunkies, and after Shima tries to hold back his chuckle of Rin having a point; Rin and Bon began to glare daggers at each other while their friends watched them. As Shima began to see that Rin and Bon are sorta alike one another while Miwa sees their opposites attracting as well as repelling.

The two continued to get the better of one another during P.E./Practical Training, while seeing which one of them could run the fastest with a chained Reaper chasing after them in a circle, along with Rin stating to Bon that brains won't save him in a fight, before Bon's frustration gets him to kick Rin while shocking that a winner of a fight is what matters most. Bon's actions and not wanting to lose to Rin nearly gets both of them killed by the demon, if it wasn't for their teacher stopping the Reaper from doing so. After glaring daggers at each other in the ring-like pit and rejoined the others, where the two were held back from each other, again, their teachers takes Bon away to have a word with him, while Rin stayed with the rest of the class.

BonRin is one of the most popular slash ships between Rin and Bon within of the Blue Exorcist fandom, along with the events of the Impure King Revival arc and the Kyoko sage anime of the arc inspiring fans to support and allow the ship. 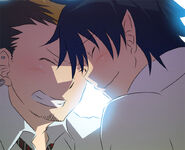 Retrieved from "https://shipping.fandom.com/wiki/BonRin?oldid=229711"
Community content is available under CC-BY-SA unless otherwise noted.