Boostle is the slash ship between Ted Kord and Michael Carter from the DC Comics fandom.

Ted and Michael are best friends. They became close during their time in the Justice League International. They stayed close after the disbandment of the team.

Booster blamed himself for Ted's death, since he didn't listen when Ted was trying to him about Maxwell Lord. Booster went back in time to save Ted, but when they got to the present, everything was wrong. They discovered that Ted's death was how the Justice League found out about Maxwell Lord's evil plans. Booster doesn't want to send Ted back, but Ted doesn't give him a choice, heading back in time and sacrificing himself to save the world.

Booster interrupts Bruce taking on the Madniks, when Bruce says that this is settling a score for an old friend. Booster remembers that Ted fought the Madniks, and is surprised that Bruce knew Ted. Bruce says that Ted was a true friend and hero, something Booster would never understand. Booster is taken aback by this as Bruce takes out the Madniks. Booster tells Skeets that that was the closest he's seen Bruce get to emotional, and Skeets says that they all miss Ted. Booster says that no one misses Ted more than him, and suggests they pay him a visit. Skeets assumes he means Ted's statue, but Booster didn't mean that. Skeets was afraid of that and they time travel back two years.

Booster Gold and Ted's relationship has been speculated to have romantic subtext for years. Many are quick to ship the two. Their relationship is easy to get behind and has multiple jumping off points for shippers. Before the New 52 fans of the ship didn't care if they got together, as long as DC brought Ted Kord back from the dead. After the New 52, fans are now just hoping for an interaction.

After the release of the Injustice II comic, fans began to speculate if the timeline's versions of Ted and Booster were together. The comic never specified but left some hints. Fans continue to speculate even after both characters death's in the timeline. 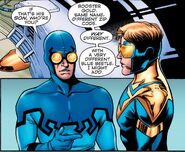 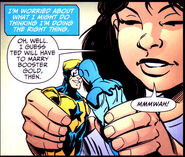 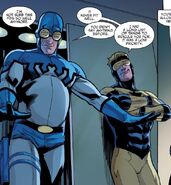 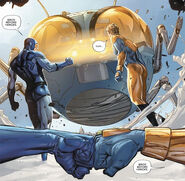 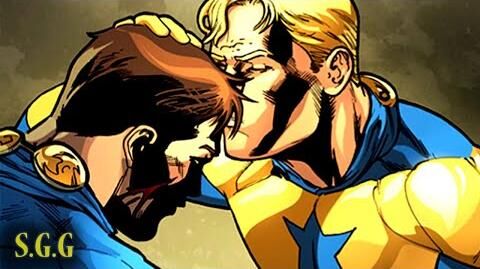