Bowsario is the slash ship between Mario and Bowser from the Super Mario fandom.

As shown with Mario and Luigi: Partners in Time and Yoshi's Island, Mario and Bowser's rivalry had existed since their infancy. Baby Bowser finds Mario to be annoying and has even attempted to have Kamek kidnap Mario and Luigi as children. Mario managed to escape, but Luigi was left behind. Thus, this left Mario and Yoshi to go rescue Luigi. With Mario's fate as a star child and Bowser's heinous acts, they two of them became enemies.

Years later, Bowser would frequently kidnap Princess Peach and terrorize the Mushroom Kingdom. Because of Mario and Peach's close friendship, Mario goes out of his way to rescue the princess from Bowser. With every instance, Mario ends up defeating Bowser and saving Peach. Bowser has come close to stopping Mario, as shown in Paper Mario and Super Mario Odyssey, but Mario always wins in some shape or form. Their rivalry has brought Mario to fame in multiple kingdoms. However, in the instance of Super Princess Peach, Bowser successfully kidnaps both Mario and Luigi, resulting in Peach rescuing them.

While the rivalry they have is fairly strong, the pair has been shown to work together when necessary. Super Paper Mario has Paper Bowser as a playable character due to the end of all worlds, however he only joins Mario for Princess Peach's sake. Bowser would later sacrifice himself for Mario and gang. He is later revealed to be safe, though. Similarly, Super Mario Sluggers has Bowser save Mario at the end. Bowser's Inside Story has Mario and Luigi being inhaled by Bowser due to a mushroom he ate. Unknownst to Bowser, the Mario Bros. decide to help Bowser from inside the koopa's body. After Fawful is defeated, he discovers this and becomes enraged. Mario and Luigi are forced into stopping him. Post-credits shows a heavily-injured Bowser given a cake with Mario, Luigi, Peach, and Bowser on top as a reward for stopping Fawful.

It is also worth noting that, despite their rivalry, Mario will sometimes invite Bowser to sports events. However, Bowser also has a history of forcing himself into these events as well. After the both of them are rejected by Peach in Odyssey, Mario pats Bowser on the back as a form of sympathy. In Super Mario RPG, Mario is required to find all of Peach's wedding items. If he fails, he may achieve an accidental kiss from Bowser. This is the only instance of romance between the duo, even though it was accidental.

“Don't get all cuddly with me, Mario.”
— Bowser, Super Paper Mario

The premise of the ship comes from the concept of Bowser stopping his constant kidnappings and taking a romantic interest in Mario instead. The ship slowly grew throughout the years, but became increasingly popular after the release of Super Mario Odyssey.

There are a few potential reasons behind its popularity: as mentioned before, Mario is shown to have sympathy for Bowser. It is a fairly common trope for love triangles to end with the rivals falling in love instead. This may be the case here. When exclusive amiibo for Odyssey was released, fans noted that the Mario and Bowser amiibo could almost hold hands with each other. Thus, some fans have made photos of the two toys depicting the ship. In this sense, the ship slightly formed as a joke.

Typically the pair in fanart are either wearing their default outfits, tuxes—Mario may also wear his Princess Peach outfit sometimes, or clothes from a 3DS commercial featuring J-pop singer, Kyary Pamyu Pamyu. They may also be portrayed hugging, kissing, or even getting married. 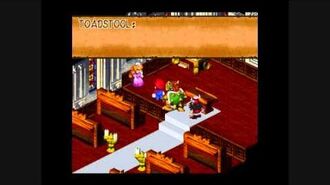 Bowsareach ― the ship between Bowser, Mario, and Princess Peach

Retrieved from "https://shipping.fandom.com/wiki/Bowsario?oldid=159319"
Community content is available under CC-BY-SA unless otherwise noted.