Bowuigi is the slash ship between Bowser and Luigi from the Super Mario fandom.

Luigi and Bowser have known each other since childhood, as shown with Mario and Luigi: Partners in Time and Yoshi's Island. Within the latter, Baby Bowser forced Kamek to kidnap the Mario brothers, with only Mario managing to escape and Luigi being taken away. He was later rescued and reunited with his brother.

In terms of interactions in the present day, Luigi has fought the koopa before, but prefers to stick to the side lines. Certain games such as Super Mario Galaxy and New Super Mario Bros U feature modes in which Luigi defeats Bowser by himself without Mario's presence. However, these are typically considered 'hard modes' and non-canon. In terms of thoughts on each other, Fortune Street reveals that Luigi doesn't trust Bowser and suspects that he always has a princess locked away in his castle. The Mario and Luigi sub series has Bowser constantly forget Luigi's name and refer to his as 'Green 'stache.' However, in recent titles, he appears to remember it more.

During Superstar Saga, Bowser accidentally misinterprets Luigi waving goodbye as excitement for the Koopa army. Thus, he concludes Luigi wants to become a minion and enlists him. Luigi tries to run away, but Bowser uses his air ship to pick him up. It is worth noting he was never 'unlisted,' meaning he's legally still a minion.

Like his brother, Luigi has also cooperated with Bowser as well. Both of them are playable characters in Super Paper Mario working together. They also have a history of playing sports and party games with each other. In Bowser's Inside Story, both him and Mario agree to help Bowser in order to defeat Fawful. However, Bowser becomes enraged once he learns of the brothers' assistance. After a fight that leaves Bowser heavily-injured, he is given a cake adorned with Mario, Luigi, Peach, and Bowser himself.

In Super Mario Adventures, the Koopalings blackmail Luigi with Mario's life in order to achieve Princess Peach. Instead of returning her, Luigi disguises himself as Peach in order to save Mario. When Bowser contacts them, Luigi pretends to be infatuated with the koopa, going so far as to saying 'I've fallen in love with you' and agreeing to a marriage between the pair. Bowser becomes excited and, after seeing the disguised Luigi with a cough mask, even shows concern for him, offering to kiss it better. However, on Bowser's end, he believes Luigi to be Peach. It is unknown what his response was to the aftermath.

Interactions between Luigi and Bowser are fairly minimal in Super Smash Bros. While both are playable characters in the series, promotional art rarely has the duo show up together. In Subspace Emissary, Luigi is taken away by Wario and Bowser, yet he is quickly forgetten about when Mario and gang show up. Luigi, King Dedede, and Ness later save everyone, including Bowser.

“I don't trust Bowser OR his spooky castle… I bet he’s got a princess or two locked up in here!”
— Luigi, Fortune Street

“Why fight it? I've fallen in love with you! I just can't wait for our wedding day. ”
— Luigi (disguised as Princess Peach), Super Mario Adventures

The ship suddenly grew in popularity due to jokes within the fandom (specifically Gay Luigi and Gay Bowser) and fan artists' comics in which Luigi and Bowser slowly form a romantic relationship. Comics typically were based on either Super Mario Adventures or the main series. Either way, due to forbidden love and enemies to lovers being tropes in the relationship, it began to rise in popularity.

As one can guess, both fanart and fan fiction have Luigi dating Bowser, unbeknownst to Mario who could potentially disagree with the pairing. Depending on the creator, Bowser may or may not give up on kidnapping Peach. In some instances, he may begin kidnapping Luigi instead. Luigi is also sometimes portrayed interacting with Bowser's son, Bowser Jr., in the vein of having the boy as a step son. However, it is rare for the pair to get married in stories.

In instances in which Mario is aware of the relationship, he is typically fairly protective of his brother due to Bowser being Mario's arch enemy. They may even fight behind Luigi's back. However, for Luigi's sake, he may sometimes let go of this belief and learn to accept it. This may play into approval of a marriage or Luigi moving in with Bowser.

Before his reveal in Super Mario Odyssey, some fans joked about Princess Peach actually being Luigi and the game secretly being about Bowser and Luigi getting married. After Luigi's Balloon World was revealed, however, fans dropped the idea. Instead, they began to create fanart of Luigi floating via balloons to kiss Bowser. Art of Luigi wearing Mario's Bowser and Princess Peach wedding outfits has also been made to coincide with the koopa. 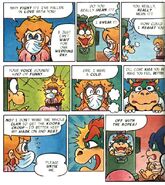 Retrieved from "https://shipping.fandom.com/wiki/Bowuigi?oldid=197134"
Community content is available under CC-BY-SA unless otherwise noted.