Brühlsworth is the friendship between Daniel Brühl and Chris Hemsworth from the Rush and Marvel Cinematic Universe fandom.

Daniel and Chris first met on set as co-stars in a biographical sport film - Rush (2013) - about the rivalry of two famous Formula One racers: Niki Lauda and James Hunt.

Both actors soon became good friends. According to Chris, the fact that they had gotten along so well had allowed them to explore their on-screen relationship openly, and that they both had shared the same excitement and enthusiasm for the film, but also the same anxieties and trepidations.[2] Daniel said that he and Chris had shared a good sense of humor, laughed a lot, teased each other permanently, and that he had a very good feeling.[3] He also stated that in the future he would like to direct a movie and casted Chris if he could afford it well.[4]

During the production of Rush, Chris had been casted as Thor for Marvel Cinematic Universe. They often joked about how Thor had become a racer. In one of interviews, Daniel claimed he had cracked up the first time he had seen Chris getting into a race car, imagining it had been Thor.[5] Several years later, Daniel got the role of Zemo for Captain America: Civil War Movie (2016). He emailed Chris to ask about his opinion on this. Chris encouraged him to do the movie, saying that they would take care of him. Unfortunately, Thor was not in the movie, so both of them could not meet on set. Daniel commented that he would have loved to have a scene with Thor.[6]

Daniel then reprised his role as Zemo for ‘’The Falcon and the Winter Soldier’’ series (2021). In an interview, he was asked about acting along with Chris in Rush. Daniel said that they had given each other comfort, got along very well, and encouraged each other all the way through.[7] Daniel was also asked if he had pitched Kevin Fiege some scenes involving Zemo and Thor. He answered that he would love it but he had not dared so far, then jokingly suggested a little dance between the two characters.[8] Another day, Daniel was asked about his favorite avenger. He later posted a behind-the-scene picture of himself and Chris on Instagram,[9] hinting the obvious.

Daniel – “We kind of, you know, in between the takes, we invented our very own romantic comedy.”
Chris – “A love story, yeah.”
— Rush Press Junket[1]

“At the end of the movie you see that these two guys also had very good chemistry and beneath all the rivalry there was a deep respect for each other. And that's what I felt for Chris. I think he felt the same for me too.”
— Daniel Brühl[10]

Some suggested that Daniel and Chris would be great Maverick and Goose. As all of their interactions were fun and chaotic, some fans dubbed Daniel as the fourth Hemsworth. It was adorable for them to see Daniel paired up with the big guy Chris. Many mention about how good their on screen chemistry was, and they hope that Zemo and Thor will have scenes together just so Daniel and Chris can reunite. Due to the relationship of both actors, some fans joked that Thor didn't join Civil War because he had already befriended Zemo. Others joked that Zemo was distracting Thor with the race, so he wouldn't join Civil War - citing Rush as Zemo and Thor prequel. Some headcanon that Zemo and Thor have variants who are racers in another universe. 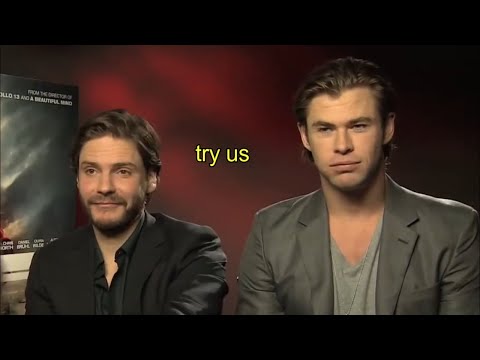