Shipping Wiki
Register
Don't have an account?
Sign In
Advertisement
in: Ships, Ships/Femslash, Once Upon A Time/Ships,
and 5 more

Merida – “You’re daft taking on these brutes by yourself.”
Mulan – “I had it under control. What are you doing here.”
Merida – “Looking for you.”
— Mulan and Merida seeing each other again.

Brave Warrior is the femslash ship between Mulan and Merida from the Once Upon A Time fandom.

King Fergus gives Merida his old bow to ready for the battle. She realizes that he’s trying to bribe her and asks him to tell her what it is. He tells her that he promised her mother to keep her safe so he brought on a soldier to teach her the art of war. Merida insists that she doesn’t need any man to teach her how to fight. She notices the soldier behind her and takes out her sword to challenge them and to prove that she doesn’t need the training. The two fight, but Merida ends up on her back quickly. The soldier removes her helmet, introducing herself as Mulan. She sticks out a hand to help Merida up. She takes it and introduces herself happily. Once up, Mulan says that she’s going to teach Merida how to fight better than any man, and have the one thing that will help her, honor. Merida is clearly excited about this.

The two train by the lakeside, ending up with locked swords for a moment. Mulan tells Merida not to leave her flank open and is about to hit her, before Merida dodges and gets Mulan on the ground, revealing her trick. Mulan is glad that Merida is learning, especially since she’s fighting smarter. Merida helps Mulan up and the laugh happily when the lords of the other clans start to mock their skills. Merida starts to charge at them but Mulan holds her back, which Merida doesn’t get since she could take them down easily. Mulan reminds her to fight smart not strong, and no one would follow her out of fear. Merida wants to know what will make them follow her, but Mulan wouldn’t know since they’re not her people, and suggests that she ask her father.

Mulan and Merida are training again, but Merida is tired and not really in it. She hears the sound of bagpipes and realizes that the battle is about to start, and that Mulan was told to keep her away. Mulan tries to stop her from going but Merida runs forward and pushed her to the ground, getting to the fight. She tries to save her father but fails just as Mulan arrives. She starts to scream, and cry, trying to run towards the man who killed her father, but Mulan holds her back. She pushes her away and is able to get Merida away from the battlefield.

Mulan has become a hired sword and is taking down a couple of guys in a tavern when Merida finds her, and shoots one of them. Mulan asks what Merda is doing there, Merida says that she’s looking for Mulan and eyes her as she takes the guys money. She needs to Mulan’s help to save her kingdom and her family, but Mulan only wants to help herself these days. Merida asks what happened to Mulan, and about where he sense of Honor went, but Mulan decides that won’t fill her purse. Merida tosses her a bag of gold as a payment and Mulan agrees as long as there are no more questions about her.

The two go to the battlefield where King Fergus died and Merida finds the arrow that hit part of her father’s killer, and use it to track him. Mulan insists that they’re wasting daylight and starts to move, as Merida shouts and asks what happened to her again. Mulan reminds Merida of the deal, but Merida knows she wouldn’t be a good friend if she stuck to it. She wants to know why Mulan has closed off her heart. Mulan tells her that she forgot to give one lesson to Merida last time: A true warrior would never let anyone hurt them, and she starts walks away.

Merida insists that they have to find a weaver to help them, but Mulan stops her as she senses someone coming. Zelena and Arthur appear and the two women pull their weapons on them. They demand information on the helm that the witch wants, since it will make other people fight their battles no matter what. Merida doesn’t believe them, since her dad would never force anyone to fight. Mulan says they can’t give them the helm since they don’t know where it is. Zelena says that they’ll find it and magics Merida’s bow away from her. Merida is about to charge after Zelena for her father’s bow but Mulan holds her back. She insists on having it back but Zelena doesn’t care, only wanting to use it to find the helm, and spells herself and Arthur away.

Merida goes back to the horses, Mulan demanding to know where she’s going, they have the cloth and can still track Arthur. Merida doesn’t care since she now believes that her father could only lead using dark magic, so she will not be able to either. She decides to go back home and save her kingdom a different way so that no one else will be put in danger. She decides to tell the lords that they need to find it, but Mulan doesn’t think they would be able to. She insists that Merida can’t give up, but Merida says that Mulan already has, so she can as well. Mulan is hurt and can only watch as Merida gallops off.

Mulan goes to the witch's house where she free’s Red, who asks why she was there. Mulan explained that she needed to help her friend, track down the man who killed King Fergus and thought that the Witch would have magic that could help. Red says that she can track Arthur using the cloth and insists that they go to help Merida.

Just as Merida is about to hand over her crown to lord Macintosh, Mulan and Red burst in, telling Merida to wait. Mulan says that Merida was right and they’re going to find the man who killed King. Merida asks how and Mulan introduces Red.

Merida, Mulan and Ruby track down the man who killed King Fergus and it’s revealed to be Arthur. Merida pulls her sword on him, but Mulan stops her, since this is about saving her kingdom, not revenge. Merida asks Arthur why he didn’t have the helm, and he reveals that Fergus never used it. Merida realizes that her father never used magic to lead, but still needs the helm to save her people, and begins to fight Arthur. Zelena and Arthur decide to find a different way to get Excalibur and magic away.

After her coronation, Merida goes to Fergus’ grave where Mulan and Red are. She thanks them for their help with her kingdom, and they thank her. Mulan for remembering who she really is, and Red for her being the reason she’s no longer a wolf. Mulan gives back the gold, and Merida asks if it’s okay to ask what happened to her. Mulan reveals that she had her heart broken after waiting too long to tell someone how she felt. Merida tells Mulan that she’s sorry. Red then invites Mulan along to search for her pack, and that it’s better than wallowing. Mulan insists that she doesn’t wallow, and Merida snickers in disagreement. Mulan decides to take Ruby up on her offer and Merida wishes her luck. She then gives her a hug goodbye and the two set off on their journey.

Merida – “You knew Fergus, too, but you're acting like you... like you never even met the man.”
Mulan – “Have you already forgotten our deal?”
Merida – “No, I remember. But what kind of friend would I be if it stuck to it? Why have you closed off your heart like this?”
Mulan – “There's one lesson I didn't teach you the last time we were here. A true warrior doesn't let anything hurt them.”
— The Bear King

The two were shipped instantly by many after the reveal that they knew each other. The fact that they were both Disney Princess' who were both best known for fighting helped, as well as the two meeting in a fight that Merida loses, followed by her smiling when it's revealed that she was defeated by Mulan. Shippers interpreted this as Merida having a crush on Mulan

The episode where the ship was created also created another ship for Mulan. Red Warrior, the ship between Mulan and Red Riding Hood. Although the two ships are technically against each other, there were no ship wars between the shippers. This was due to the small size of both ships. It was also due to fans wanting Mulan to have a girlfriend since the reveal that she was either gay or bisexual. Fans would have likely been happy either way.

The ship is the third most written ship for the Once version of Mulan, and the second most written ship for the Once version of Merida, but many would consider it a rare pair. While the ship is commonly focused on OUaT's version of the two, there are fans who use ship and its commonly used title with Disney's versions of them within the Disney Princess part of the Disney fandom, since the ABC television series has its own versions of the Disney characters and has a few traits from its series; and it being the live-action show that triggered the ship or had helped to make it popular in both fandoms.

Since Ralph Breaks the Interest is a canon Disney crossover that has a version of the two know each other, like their once counterparts do in the Once Upon A Time series, fans of the Disney side of the ship sometimes have Mulan and Merida in the modern, style clothes that the netizen versions of them wear in the film. 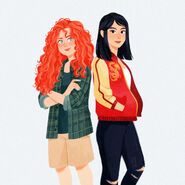 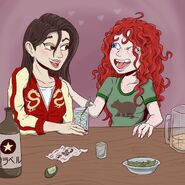 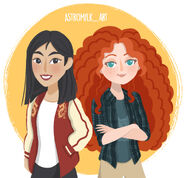