• Battle Couple - Both are founding Avengers.

“I'm running with it, with you. If running's the plan, as far as you want.”
— Natasha, Avengers: Age of Ultron.

Brutasha is the het ship between Bruce Banner and Natasha Romanoff from the Marvel Cinematic Universe fandom.

Nick Fury sent Natasha to Kolkata, India in order to recruit Bruce to search for the Tesseract. Bruce agreed despite not trusting her, or S.H.I.E.L.D. in general. On the S.H.I.E.L.D. helicarrier, after Loki's brainwashed men caused an explosion in the lab that sent Natasha and Bruce flying through a window, Bruce began to transform into the Hulk. Natasha, whose leg was pinned under fallen debris, attempted to keep him calm, but Bruce still transformed. Natasha managed to free herself and fled in terror from the Hulk. Hulk hit her across a room, and likely would have done more damage if Thor hadn't intervened and gained the Hulk's attention. Despite Natasha being visibly shaken and terrified by the Hulk, the two fought alongside each other during the Battle of New York. At the end they went to their ways with a peaceful goodbye.

Since the days of The Avengers, Natasha and Bruce had devised a way to calm the Hulk down enough to turn back into Bruce. The method, called a lullaby, involved Natasha saying, "the sun's getting real low," and then gently touching his arm and hand. Natasha is the only one who manages to calm down hulk.

Natasha and the Hulk fought alongside each other to retrieve Loki's scepter from a HYDRA research facility in Sokovia. Though she was still visibly scared of him, she successfully used a lullaby to calm the Hulk down after the battle. On the Quinjet back to Avengers Tower, Natasha tried to convince Bruce that he wasn't a monster, that Clint would be dead without him, and that he was actually saving lives with his strength

At the after-party to celebrate their acquisition of the scepter, Natasha flirted with him, saying they should run with it, though Bruce was hesitant to start flirting with her. She protected him during the ensuing fight with Ultron's bots, telling him not to turn into the Hulk. Wanda Maximoff later inflicted them both with nightmare visions. Natasha was forced to relive her traumatic past, while Bruce was turned into a furious, unthinking, unfeeling Hulk.

After the events of Johannesburg, Clint takes the Avengers to seek refuge at his farmhouse. Later on we see Bruce and Natasha talking in one of the guest rooms. Bruce expresses his intentions of leaving the Avengers, to what Natasha suggests they should run away together. Bruce declines the idea, stating that he's is dangerous and that he can't offer Natasha a proper, normal future since he can't control the hulk and have biological children, Natasha confesses to him that she's sterile as well, result of a procedure she was forced into when she was trained in the red room. The realization of both of them being 'forced' to do stuff they don't necessarily want to (for Bruce turning into the Hulk in times of losing control over emotions/adrenalin, for Natasha being part of the Red Room, the ceremony) but still taking guilt on themselves made Bruce reconsider running ("So we just disappear?").

Later, when Natasha was captured by Ultron, Bruce rescued her while the others evacuated civilians from the city. Bruce told her that he was willing to run away with her. Natasha, who knew they had to finish the mission so civilians won't get hurt, kissed him, and then pushed him off a ledge to turn him into the Hulk. The two fought in the Battle of Sokovia. Afterwards, Natasha attempted a lullaby, but gunfire from Ultron prevented her from completing it. The Hulk placed Natasha safely on the S.H.I.E.L.D. helicarrier and took over a Quinjet, flying off to parts unknown. He shut down Natasha's message asking him to come back, greatly saddening her.

The Hulk followed Thor into the Quinjet, trying to making him stay but failed as Thor accidentally turned on Natasha's old message. seeing and hearing Natasha again brought up the feelings toward her and Hulk turned back to Bruce, after 2 years of Hulk being in control. one of the first things Bruce asks Thor about is how Natasha is doing.

Natasha and Bruce met for the first time in several years at the New Avengers Facility and greeted each other nicely. They later fought together in the battle against Thanos' forces in Wakanda. They both survived Thanos' snap to kill half the universe.

Bruce and Natasha were two of the team who survived the Snap. They were also two of the people who ambushed on Thaos in the Garden. Five years later, Natasha, Scott, and Steve met Bruce at a diner to discuss about the time travel plan. Bruce dismissed the idea, claiming it's outside his area of expertise, however Natasha pointed out that merging Bruce and Hulk seemed pretty impossible, yet Bruce pulled it off nonetheless.

When the Quantum Tunnel was being tested by trying to bring Scott on a time travel, Bruce mentioned that he didn't want to lose Scott in the 1950's , which panicked Natasha, Scott, and Steve. Natasha then assured Scott that Bruce was kidding and warned Bruce not to say things like that. Bruce then whispered to Natasha that it was barely a joke and that he was actually unsure of the time travel.

After the Time Heist, Bruce noticed that Natasha was not with Clint and immediately asked him where she is. He eventually learned of her death and hurled the bench across the lake out of anger. Bruce insisted that the team must make her sacrifice worth it.

Following the Battle of Earth with Thanos, Bruce admitted to Steve that when he had the gauntlet and the stones he tried to bring Natasha back, adding that he missed her.

“Fact is he's not like anybody I've ever known. All my friends are fighters — and here comes this guy. Spends his life avoiding the fight because he knows he'll win.”
— Natasha to Bruce, Avengers: Age of Ultron.

“She's not the most open person in the world. But with you she seems very relaxed.”
— Steve to Bruce, Avengers: Age of Ultron.

Scarlett Johansson – “These characters have what would have met what I always thought was a very unlikely love story that buds between them. It's actually, in truth, rooted in a very likely love story. These characters have a lot in common. They are two people that are really idealizing this future that they have, that they could have with one another and which is really a result of their past. I think the fact that they have this kind of fantasy of a normal life, finding themselves and another person and being able to live their life together. They have this one side of them that draws them and then this other side that is the kind of divine fate that they are in store for, and it's just a very complicated relationship that they have a kind of impossible love. It seems unlikely but it isn't.”
Mark Ruffalo – “He wants that more than anything and it's a completely undeveloped part of who he is. These two people are the ultimate outsiders inside the Avengers and I feel like they innocently sort of fumble into these feelings.”
— Avengers: Age of Ultron Interview[1]

“I think that they made a choice that was for the greater good. I think everybody must have had that where you kind of meet someone and it's just not the right time. It just wasn't really meant to be. But I would love to do like the other kind of story line where they have like some Bogart and Bacall romance.”
— Scarlett Johansson on Endgame [2]

Several headcanon so as: Natasha and Bruce love drinking tea together, having a kid names Rebecca, Bruce seeing Natasha in the Soul World after snapping his fingers, etc. are very popular in fanon. While the ship isn't well liked by a good chunk of the fandom, it still does have it's fans. They see potential with the ship due to their shared suffering, and felt that it could have been better if it was not rushed. Fans of the ship appreciate the nods to the two in later movies. 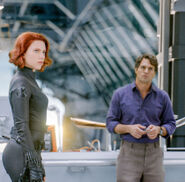 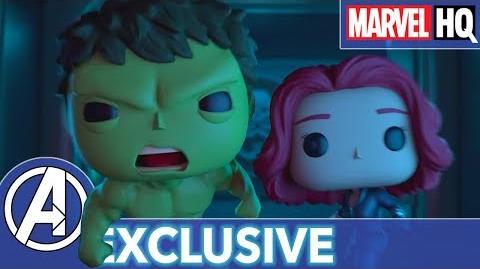