• Hair Contrast Duo
• Interspecies Romance
• It Was a Gift - The shirt.
• Last-Minute Hook Up
• Light Feminine and Dark Feminine
• Like an Old Married Couple
• Married to the Job - The reason for their break up was that Bubblegum got too busy running the Candy Kingdom, and couldn't make time for Marceline.
• New Old Flame
• Official Couple
• Relationship-Salvaging Disaster
• Tomboy and Girly Girl
• Will They or Won't They
• Working with the Ex

Bubbline is the femslash ship between Marceline Abadeer and Princess Bubblegum from the Adventure Time fandom.

Their first interaction came in the episode "Go With Me." Bubblegum looked unhappy to see Marcy and Marcy greeted her teasingly. Marcy spends the entire episode ruining Finn's attempts to ask Bonnie out by giving him bad ideas. When Finn is completely rejected by Bonnie, Marcy is happy to see that Finn failed and when Finn asks her to go to the movies instead, Marcy agrees as long as it's as friends.

Later in the episode "What Was Missing", a Door Lord steals the main characters' possessions and locks them behind a door that can only be opened by singing the truth. Marcy starts to sing, but Bonnie dislikes what she was singing causing Marcy to lash out and say "Oh you don't like that. Or do you just not like me", which Marcy then began to sing the long remembered the song "I'm Just Your Problem". The lyrics from "I'm Just Your Problem" give the first indication that the two had a romantic relationship, especially "Well, I shouldn't have to justify what I do. I shouldn't have to prove anything to you. I'm sorry that I exist, I forget what landed me on your blacklist. But I shouldn't have to be the one that makes up with you. So... why do I want to?". This being the truth, it almost opens the door, but when Marcy realizes she was singing about making up with Bonnie, she freezes up and gets defensive. After Bonnie's attempt to open the door fails, Marcy and Bonnie get into an argument and Marcy spits on her. As Bonnie is walking away, Marcy begins tearing up. Thankfully Finn gets them to stay by singing a song about how Jake, Bonnie, and Marcy are all his best friends (during which Bonnie and Marcy sing in harmony together) and this song opens the door. When they get their stuff back, it is revealed that Bubblegum's most treasured item is a t-shirt that Marceline gave her, which she wears as Pajamas every night. You can see Marcy visibly blush when she sees Bonnie kept the shirt.

At the start of the episode "Sky Witch", Bubblegum is shown in the T-shirt and smells it deeply before going into her closet, which has a picture of her and Marceline in it. Later in the same episode, despite still being at odds, Marcy asks Bonnie to help get Hambo (the teddy bear Simon gave her) back from Maja the sky witch, which Bonnie agrees to. Despite the constant snark between the two, Bonnie sacrifices the shirt to get Hambo back (which Maja notes has even more sentimental value than Hambo).

The episode "Time Sandwich" shows that they have finally made up and are friends again, evident by Bonnie being the one to call Marcy for help getting Jake's sandwich back from Magic Man.

In the episode "Varmints" Marcy comes to visit Bonnie late at night for a convenience store run only to find the King of Ooo in her bed. Marcy then becomes upset when she finds out the King of Ooo took Bonnie's job and she didn't tell Marcy after two months. Marcy then goes to Bonnie's new home and demands to know why Bonnie didn't tell her, which Bonnie answers by explaining that she was embarrassed and she wanted to take time to think things through rationally. When Bonnie explains that her pumpkin patch has been raided by "varmints" (if the creatures have a real name, it's never revealed) for the past few nights, Marcy decides to stick around to help Bonnie deal with them. Just as they are starting to reminisce, the varmints show up and Marcy and Bonnie chase them back their hole and discover that the varmints are nesting in the underground tunnels Bonnie and Marcy used to hang out in. They briefly reminisce about how Marcy would spray paint the tunnels and how Marcy got Bonnie to spray a tag before continuing on the hunt. When crossing a gap, Marcy pokes fun at Bonnie's preparedness and after snapping back Bonnie explains that the reason she prepares so much is that the Candy Kingdom is no longer as manageable as it once was and she felt she needed to be prepared for every possible disaster. Marcy asks if that's the reason why Bonnie stopped talking to her, but before Bonnie can answer they are attacked by a giant mother varmint. Bonnie's hat is stolen by a varmint and she and Marcy are forced into a small room in the tunnel, which just so happened to have Bonnie's tag in it (the tag says "Marceline made me write this - Bubblegum"). Marcy makes fun of how prim and proper Bonnie's handwriting has always been, but when she sees that Bonnie has begun to cry, she apologizes and says that Bonnie's handwriting is nice. Bonnie explains she was actually crying about how she keeps on losing everything. She then goes on to say that she used to believe everything would be ok if she just focused on work, but realized that it just pushed everyone way and she apologizes to Marcy for pushing her away. Despite not wanting to mess up Bonnie's tag, Marcy uses her powers digs threw the wall when Bonnie gives the go ahead, allowing the two of them to escape the tunnel. Back at Bonnie's house, Marcy says she'll watch the pumpkin patch while Bonnie gets some sleep, then Bonnie proceeds to fall asleep on Marcy's shoulder.

In the episode "Marceline The Vampire Queen" [1], Bubblegum declares to her: "You know I care about you. I think you're making the right choice. Your natural lifespan is going to be richer and fuller than you can imagine. And someday, when you die, I'll be the one that puts you on the ground."

In the episode "Broke His Crown", Marcy takes Bonnie to dinner at the Ice King's place. Bonnie says she doesn't know why she let Marcy talk her into this, but Marcy points out that only half of her life should be business and the other should be personal. When part of Bonnie's drink gets on her face, Marcy wiped it off. After the Ice King starts glitching, Bonnie examines his crown and Marcy demands to know what she's doing. Bonnie explains that there is something wrong with Simon and Marcy starts to say something but is take aback when she notices that Bonnie called him Simon like she wished Bonnie would. After Simon wigs out, Bonnie hooks up the crown to her virtual reality machine. After promising to use it to play games later, Bonnie and Marcy use the machine to enter the inter-workings of the crown. Once inside, they meet up with copies of a dinosaur creature named Gunther and the original Simon from before he lost his mind. While the four of them begin searching for the source of the glitching, Simon and Marcy begin talking and Simon asks if Marcy has been dating anyone and you can see a smile on Bonnie's face when Marcy says she not.

They were also recently seen holding hands and wearing each other's clothes in the episodes "Seventeen" and "Marcy and Hunson".

In the Adventure Time Finale, "Come Along With Me", the two kissed after Marceline declares her feelings for Princess Bubblegum, stating that she didn't want to lose her again. As the episode wraps up, they can be seen cuddling together on a sofa, blushing.

Adventure Time: Distant Lands is a continuation of the Adventure Time series available on HBO Max. Episode two, titled "Obsidian" was released on November 19 2020, and takes place a few years after the series finale and into Princess Bubblegum and Marceline's relationship. The official synopsis for Obsidian revealed that the two takes a look into their past relationship and how the two move forward.

The ship sailed after "What Was Missing" showed they were close in past and Marcy's song "I'm Just Your Problem" implied they had a broken relationship in the past.

It's very much possible that PB and Marceline could've been past lovers. It's also been mentioned by the cast in interviews about whether or not Bubbline was actually canon.

As mentioned before, it's revealed that PB's most meaningful item was the shirt that Marceline gave her before. This is widely used in many fanfictions, as it shows that PB actually does care about Marceline and even wears her shirt to sleep and sniffs it when she wakes up, as shown in the episode "Sky Witch".

One of the other things is when Marceline has a dream where she and PB are living together as an old couple. It's widely interpreted as Marceline dreaming about what future they could/will have.

Bubblegum and Marceline kiss in Obsidian 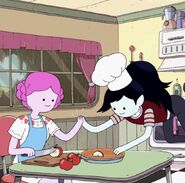 Dancing Together in Obsidian 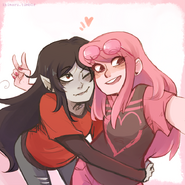 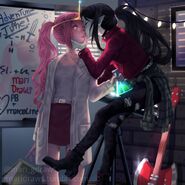 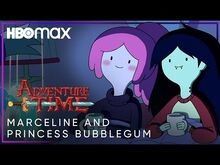 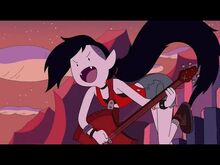 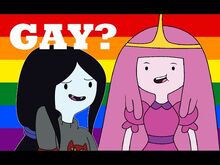 Are They Gay? - Princess Bubblegum and Marceline (Bubbline)

Adventure Time The Evolution Of Princess Bubblegum And Marceline's Relationship

Bubbline AMV I need your love

Bubbline AMV 'I hate you I love you'

Bubbline Story~ I kissed a girl

The Heart Wants What It Wants Bubbline AMV

Gumlee refers to the slash ship between Prince Gumball and Marshall Lee (genderbend version of Bubbline).