• Pair the Smart Ones

Caitlicity is the femslash ship between Caitlin and Felicity from the Arrowverse fandom.

In mid-January, Felicity visits S.T.A.R. Labs where Barry is being treated while in a coma following the particle excellerator explosion in December. Felicity and Caitlin meet for the first time, as Caitlin and Cisco are tending to Barry along with Dr. Wells.[1] Felicity stays for about a week in Central City, and thus spends some time with both Caitlin and Cisco.[2]

Felicity visits Central City after Barry has woken from his coma and they go on their first official date. While there, Felicity catches up with Caitlin and works with Team Flash, now that Barry has acquired superpowers. Caitlin and Felicity work well together and enjoy being two scientists who get to spend time together and share ideas, as they generally work with only men otherwise, on their respective teams. When Barry goes up against Captain Cold, Caitlin and Felicity, along with Cisco, threaten him with a machine (that is actually just an industrial vacuum) despite none of the three having superpowers. They bond after this experience of Felicity helping out Team Flash.[3] Oliver, Diggle and Felicity drop by not long after, when they have trouble with a villain Cisco dubs Captain Boomerang and need help from Team Flash. While Oliver and Barry train together, the teams bet on who would win in a fight and Team Arrow end up helping out Team Flash when Barry falls victim to another meta's powers.[4] Barry, Caitlin and Cisco travel to Star City to help Team Arrow with Captain Boomerang. Caitlin and Felicity watch as Barry speed races through the salmon ladder and Felicity tells Caitlin how Oliver usually does that.[5]

In Spring 2015, Felicity returns for a visit with her new boyfriend, Ray Palmer, whom Caitlin finds very attractive as well. Barry confides in Felicity his suspicions of Dr. Wells and concerns about Caitlin and Cisco, but Felicity assures him that the three of them are a team and that Barry can trust both Caitlin and Cisco. Felicity helps them fight the Bug-Eyed Bandit and chats with Caitlin about new research Caitlin is looking into as well as Felicity's new relationship. Caitlin remarks how nice it is to have another woman to discuss science with in the labs and Felicity agrees.[6] In the Autumn, Barry asks Team Arrow for help with Kendra's sudden immortal enemy and Caitlin joins the teams at an A.R.G.U.S. safe-house, where they can lay out their strategy for defeating Vandal Savage. Caitlin and Felicity, along with Cisco, work together on the technical aspects of Savage's weaponry.[7]

Caitlicity was one of the most popular femslash pairings in the first season of The Flash. Once the following seasons aired, the characters were given less and less significant screen time in crossovers. In addition, canon femslash pairings became a larger part of the two other Arrowverse shows, Supergirl and Legends of Tomorrow, which also have much bigger focus on female relationships in general. Now it's more of a seldom pairing in the fandom. 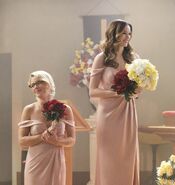 All Star Team Up 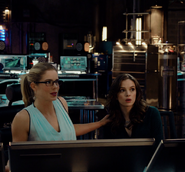 The Brave And The Bold

The Brave And The Bold