CarolJess is the femslash ship between Carol Danvers and Jessica Drew from the Marvel fandom.

Jessica Drew and Carol Danvers cross paths for the first time in the first few pages of Avengers Annual#10, when Jessica saves Carol from certain death after her encounter with Rogue. Jessica doesn’t just stop at getting Carol to the hospital; she lets her genuine concern for this woman she doesn’t know go far beyond her obligations as a superheroine. After the doctor tells her that her Jane Doe is physically fine but seems to have been left in a blank mental state, Jessica contacts Charles Xavier because she suspects there is much more to Carol’s condition than meets the eye. Of course, she was absolutely right.

Jessica not only goes to investigate what happened to Carol, but she also supports Carol in a way that the Avengers failed to support her during the Marcus storyline. Due to the nature of how Charles had to go about assisting Carol piece together who she was before Rogue attacked her, Carol had to essentially experience the pain and trauma of what happened to her all over again and Jessica was right there by her side, fully supporting her when Carol needed it the most. The two of them grew immensely close during Carol’s recovery.  Jessica never treated Carol like a helpless victim, but rather instead as someone who survived a horrific assault and who is allowed to be vulnerable and strong at the same time.

When the time came for Carol to confront the Avengers, Jessica was by her side, ready to back her new friend up if she needed the help.

After Avengers Annual #10, Jessica’s interactions with Carol are present but few and far in-between. It wasn't until the most recent Spider-Woman run by Dennis “Hopeless” Hallum that we got to see the seeds planted by Chris Claremont really come to fruition in regards to their friendship. Carol is a constant fixture here — which, aside from Jessica's costume redesign, is one of the best components of the entire series. There's more than just them fighting villains alongside each other but there are plenty of emotional story beats to their friendships throughout. They’re just two super-powered besties who love each other from Galactus and back.

The first few issues of the series are centered around Jessica preparing to have her first child, and there are many great moments showcasing just how close the two women are. Carol is super involved; she even makes Jessica an appointment to be seen at one of the greatest maternity hospitals in the galaxy. Unfortunately, the hospital is taken over by a small army of Skrulls, but Jessica handles them accordingly after an emergency c-section. The entire time, Carol does everything in her power to get to her best friend. When Jessica is having doubts about her ability to go back to work once her maternity leave is over, Carol is right there to listen to her concerns, letting her come to her own solution — similar to how Jessica let Carol handle the Avengers on her own.

During the Civil War II storyline, Jessica and Carol’s friendship is put to the test. The two have a falling out when Bruce Banner is killed, thanks to Carol acting on a vision Ulysses Cain has about the Hulk killing the Avengers. This leads to not only an argument between Jessica and Carol, but Jessica talking to Carol with her fists more so than her words. The two eventually make up but it’s because Carol lets Jessica find forgiveness instead of trying to force the issue. Neither Jessica or Carol are perfect superheroines, but their love for another regardless of each of their own shortcomings is a great reflection of their loving friendship.

The ship is fairly popular in the Marvel comics fandom. This is due to the close relationship between Jessica and Carol. Both physically and emotionally. The two are often shipped alongside Stony, since they're typically the bigger and more prominant members of the Avengers in the comics. 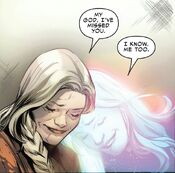 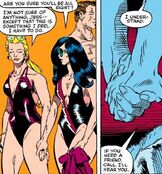 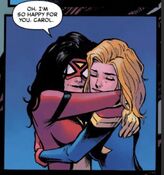 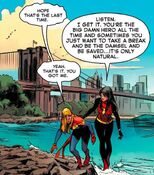 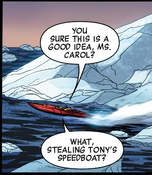 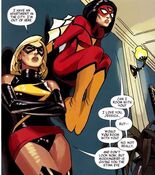 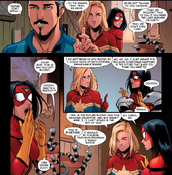