Cassunzel is the femslash ship between Rapunzel and Cassandra from the Tangled fandom.

Shortly after Rapunzel began to live life as a princess with her birth family, she tries to befriend her a signed handmaid Cassandra, who she has nicknamed "Cass" for short, but Cassandra can't stand Rapunzel and doesn't want to be her friend. As Rapunzel's pushy and trying too hard attempts to gain her friendship have kept Cassandra from returning it back. While Cass appears to be someone that wouldn't be interested in someone like Rapunzel, the returned princess has manged to see Cass's kind hidden nature and is someone else she wants to befriend since she left her isolated tower life.

After Eugene suggests that Rapunzel could try a bonding activity to help her and Cassandra become close and since the Contest of the Crowns requires her to have a partner, she chooses Cass who wasn't so sure about Rapunzel's choice as most of the challenges would be of things that she doesn't like. Along with Rapunzel's having fun, bonding attempts during the challenges were making them lose, but after the Queen of Ingvarr officers Cassandra a chance to be part of her warrior women army, by winning the final challenge that she had picked for the contest, Cassandra attempts to put up with Rapunzel so they could win. While it didn't work out in the next few challenges, they were able to put Corona in the lead with the rest of them after the two had a chance to talk, say sorry for how they were treating each other and how they can truly form a friendship between them.

As their newly formed friendship continued to grow while going through the rest of the challenges they have manged to do well in together, the final one hindered it when the Queen of Ingvarr wished Cassandra luck and had told Rapunzel what Cass would gain by winning, and that Cass isn't happy about being Rapunzel's handmaid; even though the last part was no longer true. The truth hurt Rapunzel has it made her realize that Cassandra was using her to get what she want, like Mother Gothel had done for the last eighteen years with her, and gave Cass her pair of the spirit bracelets she earlier made for them as a pair. Realizing that a friend like Rapunzel is far more important that her big chance, Cass through the challenge so she can help a knocked down to the ground Rapunzel back on her feet, and to ensure that she stays in Corona with her. As the two girls leave the arena with grace, the two wear their spirit bracelets after Pascal gave them back to the girls.

Since then Cass has helped Rapunzel to adjust royal life by teaching her all that she needs to know; as well as other things that she wouldn't have learned within her isolated tower. Along with making sure that Rapunzel is on time for her responsibilities.

Tangled: Before Ever After

While Cassandra is loyal to King Fredric, who is overprotective of Rapunzel, and with the princess's coronation fast approaching, along with a few things that are making Rapunzel feel upset with her castle life and people making decisions for her, without asking what she wants, Cass decides to cheer her friend up by going against the rule of not allowing the princess to cross over Corona's wall, since Rapunzel wants to see more of the outside world and knew that sneaking her over the boarder wall, for a short time, would cheer her up; despite Cassandra knowing that her actions will get them in trouble. After allowing Rapunzel to enjoy her moment of being outside Corona's boarders for the first time, Cassandra takes her to the very spot that the royal guards had found the magic flower that saved the Queen while she was pregnant with Rapunzel; along with showing her the mysterious black rocks that sprouted out of the ground sometime later. Shortly after Rapunzel touches the rocks her long, blond hair begins to grows back while the rocks began to chase them and even though they were able to get way from them, the girls knew that Rapunzel's sudden hair growth would raise questions that would get both of them in trouble with the King.

When they got back the castle Cass has a quick joke about the hair style she could give her friend, as Rapunzel hopes that her returned hair would turn brown again once they cut it to hide the evidence, only to learn the hard way that it can't be cut. No matter what they used to do it. With little choice Cass provides Rapunzel with a hair-net like wig to hide it. Cassandra helps Rapunzel to tuck her hair into it before giving her friend a pet talk about the coronation. After the secret of Rapunzel's hair was out and the two, along with Eugene, were able to save the King and a hand full of nobles from Lady Caine and her crew of criminals, Rapunzel doesn't tell her father that it was Cassandra's idea for her to spend some free time outside Corona's boarders at night, to keep her friend from getting into trouble. As well as making sure that the blame of their actions are on her alone.

While Cassandra understands that Rapunzel's questions about her long, returned hair need to be answered, her fears of the punishment she'll receive, once the King or her own father learns that it was her who took Rapunzel over the wall that night, gets her to make Rapunzel swear to not breath a word to Eugene or anyone else about their midnight trip. Even though Rapunzel had already kept that fact from her father when she told him the half truth of it. After Rapunzel reassures her friend that she has no intention of getting her into trouble, Cassandra tells Rapunzel about a "wizard" she heard about called Varian and how his "magic" might be able to help them, before they make their way to the mainland village Old Corona.

Before Rapunzel begins her journey of following the black rock with her friends, Cassandra, Eugene, Pascal, Lance, Hook Foot and Shorty, the King had asked Cassandra to keep Rapunzel safe and she reminds her friend of this, along with the dangers they may come across on the way, since the world outside Corona isn't all fun and games, as they approach the first big city on their journey.

One of the main reasons why Cassandra had betrayed Rapunzel are shown in the flashback prologue of "Rapunzel's Return", that reveals what Cass had seen in the mysterious room at the House of Yesterday's Tomorrow during "Rapunzeltopia". Being reminded of the night her mother left her all one her own, while she disappears with baby Rapunzel in her arms, is what the Enchanted Girl used to convince Cassandra that she would always be overshadowed by Rapunzel, no matter what she did or say. Which is why she took her Moonstone opal for herself and declares that Rapunzel's destiny belongs to her. Despite being told all this by Cass when she explained her reasons and what she saw in that room, Rapunzel didn't care that Cass is Mother Gothel's blood daughter, as in a way it makes them sisters, and Rapunzel tells Cass this as she tries to reason with her, but Adira intervening and Rapunzel asking Cassandra to wait, prevented her from listening to the rest of Rapunzel's words, as she was tried of waiting, no longer views Rapunzel as a friend and has decided to cross the line that has kept her back for so long. No matter the cost, as she used her new powers and weapon to destroy the bridge of Black Rocks Cass created to make her getaway. Failing to chase after Cassandra, as Rapunzel kept on trying to reason with her up until she sliced the black rock make bridge, left the blond haired princess horrified at the fact that her best friend is now her newest enemy. After Rapunzel and her friends returned to Corona and restored order to the kingdom, Rapunzel finally begins to open up about Cassandra's betrayal with Eugene.

As Rapunzel continues to reflect on what happened between her and Cassandra at the Dark Kingdom, and how it let up to it, the mysterious Enchanted Child helps Cass to master the Moonstone's power by feeding the anger and envy she has for Rapunzel, along with making sure that Cass doesn't decide to mend the friendship she had gotten Cassandra to break with Rapunzel. Despite what a few people say about Cass and how her actions of betrayal towards Rapunzel is a sign that she isn't coming back, Rapunzel refuses to believe that fact or to let go of the friendship she has with Cassandra, as friends don't give up on each other. Which is why Rapunzel was having trouble picking a new handmaid, despite telling everyone that Cass's betrayal no longer bothers her when it secretly does.

At the beginning and end of "Beginnings", Rapunzel reflects on the events that allowed them to become friends two years ago, when Cass had chosen her over the chance to be a female warrior in another kingdom, she looks at the yellow and blue spirit bracelets that she had made them for the Contest of the Crowns. While the ghost-like child tells Cassandra that half of the Moonstone's powers are within Rapunzel when she touched the black rock that night, and that all of the opal's powers should belong to her alone.

View From Up Here | Mandy Moore and Eden Espinosa

Cassunzel is the most popular femslash ship of the Disney Tangled fandom, a bit like how Honeygogo is seen as the main femslash ship of the Big Hero 6 fandom. After the events of "Rapunzel's Return", it inspired a few fans to begin comparing Cassandra and Rapunzel with Elsa and Anna from Disney's Frozen, due to their duet songs "For the First Time in Forever Reprise" and "Crossing the Line", along with a few fans viewing them as female versions of Cloud Strife and Sephiroth from Final Fantasy VII.

On AO3, the ship has 86 fanfics while fanfiction.net has 62 in it Tangled category.

Rapunzel's Relationship with Cassandra on the Disney Wiki 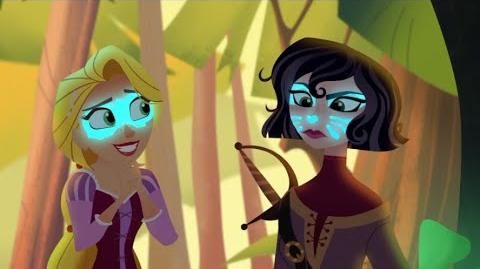 Cassgeneunzel refers to the ship between Rapunzel, Cassandra and Flynn Rider

Retrieved from "https://shipping.fandom.com/wiki/Cassunzel?oldid=220604"
Community content is available under CC-BY-SA unless otherwise noted.