She-Ra and the Princesses of Power

Catradora is the femslash ship between Catra and Adora from the She-Ra and the Princesses of Power fandom.

Catra and Adora were childhood friends that grew up together in "The Horde", an evil force fighting against the rebellion and training young cadets and soldiers. Even as children, they were always together. They would play with each other, cheer each other up, explore places in the Fright Zone.

One day, they got curious and entered the Chamber of the Black Garnet where Shadow Weaver caught them. She let Adora run, but paralyzed Catra and punished her verbally with intimidating and brutal words. Adora told her to stop, but Shadow Weaver kept on going. When she couldn't take it anymore, Adora jumped in front of Catra, leading Shadow Weaver to let them go. This event seemed to have traumatized Catra, as it's one of the memories she sees in the Crystal Castle.

Catra was always jealous of Adora being everyone's favorite and the best of the cadets, even though she overplayed it and acted like she was fine with being second place. Adora bought it and never noticed how frustrated Catra was. Later in the series, when Catra breaks down because of these suppressed feelings of jealousy, Adora promises that she never loved being the favorite and that it wasn't her intention of making her feel like that, but Catra is suspicious of her statement.

After Adora leaves The Horde to fulfill her destiny of becoming She-Ra, Catra was extremely hurt and felt utterly betrayed, as she thought Adora left her for her new and "better" friends. This plus the constant manipulation and intimidation from Shadow Weaver and Hordak, as well as her finally being able to be the best, she completely turns against Adora and becomes her enemy. As soon as she became Force Captain and was secretly assigned the mission of bringing Adora back, she did everything in her power to do her job, becoming much more forceful and bitter throughout the series and even attempting to take Adora out herself.

In the episode "Princess Prom", Catra and Adora share a dance. Catra also shows up in a red/magenta suit to make Adora jealous. During that dance, Catra is shown dancing with Adora. Catra also dips Adora. Later in the episode, when Catra is about to fall off of the cliff, Adora wraps an arm around her waist and pulls her back up. The fact that Adora grabbed Catra's waist instead of her hand says something about their relationship.

Even though that is the case, Catra is shown to still have some empathy and feelings for Adora, which she's trying to hide and suppress as well. One example would be that Catra gave Adora her sword back and let her flee after she rescued Bow and Glimmer. She's also hesitant when they were in the Crystal Castle together, however, she left Adora in there alone after seeing the memories of how much pain she had to through during their childhood.

In the episode ''Promise'', Catra follows Adora into A First Ones Temple, where Adora trys to figure out how to heal Glimmer after Shadow Weaver damaged her teleportation powers. Adora senses someone else is here and she throws her sword at a rock where Catra was standing. The adminstrator detects a intruder and begins shutdown. Adora tells Catra to ask how did she get here. She tells her that a mile high beam of light was shot in the sky and it wasn't hard to find it and her. They run into the tunnel with a monster behind them and enter a simulator of painful illusions of memories.

Following The Horde's defeat at the Battle of Bright Moon, Catra and Adora become more serious about trying defeat each other's faction. In the episode "White Out" Catra finds out from Entrapta that She-Ra can lose her powers when a First One Data Disk is used against her. When Adora shows up to stop Catra's group from gathering First One tech, Catra uses the Data Disk on the Sword of Protection but is nearly overpowered as an infected She-Ra goes berserk, attacking both friend and foe. Catra panics and calls out for Adora to stop before Scorpia is able to subdued Adora. Scorpia is then put in charge of guarding Adora and while still in her infected mindset, Adora is able to guess the pass code for a door because it is Catra's favourite number. When the facility is attacked by monsters with the same infection as Adora, Catra still refuses to break the Data Disk and give up her hold on Adora.

Adora and Catra don't meet again until after Catra has been sent to the Crimson Waste by Hordak on a suicide mission as punishment for Shadow Weaver escaping. As Catra takes over as a leader of a gang in the Waste, Adora, Bow and Glimmer begin searching the area of First One tech, unaware Catra is in the area.

Catra and her newly formed gang end up capturing Adora while on a First One's ship. While Catra truants Adora about taking her back to the Horde to gain favour with Hordak again, she out finds that Shadow Weaver is now in Bright Moon. Knowing that Shadow Weaver has once again chosen Adora over her, Catra becomes so distraught and angry that she throws away the possibility of a happy life in the Crimson Waste with Scorpia, instead deciding to return to the Horde so they can finish their portal weapon and destroy the Rebellion once and for all.

Making good on her word, Catra brings Adora back the Fright Zone and gives Entrapta her sword so that she can open a portal. Even as Glimmer, Bow, and Shadow Weaver come to rescue Adora, Adora still pleads with Catra not to use the machine due to its destruction capability. Unmoved, Catra pulls the lever and opens a portal.

In "Remember", Adora awakens in her bunk in the Fright Zone with Catra, seemingly having never left or joined the Rebellion. Adora is at first somewhat aware that their current reality is wrong but Catra is quick to assure her that all is well, and catches her up current events. Catra takes Adora to the locker room where she and their squad mates present Adora with a cake made of ration bars to celebrate their resent victories.

As the day goes on Adora becomes more distressed as her memories return to her, which in turn scares Catra who also seems to be regaining her memories but doesn't want to admit that the alternate reality isn't real or stable. After Catra takes Adora outside to get some air, she talks about about ruling the world together with Adora, however Adora isn't sure she wants that.

Adora sees reality becoming more unstable and tries to convince Catra that they cannot stay but Catra refuses to listen. Desperate, Adora knocks Catra out and carries her away from the Fright Zone as it begins to be erased from existence. Despite Adora's pleading that she doesn't want to lose Catra again, Catra remains too consumed by her anger to listen and the two begin to fight. With the world disintegrating around them, Catra lets herself fall into the light and be erased rather than accept Adora's help.

While Adora continues to search for a way to close the portal and stop their reality from being eased, a corrupted and disfigured Catra re-emerges and attacks her once more. Catra continues to blame Adora for all that has happened, until Adora becomes angered and begins fighting back. Once she gains the upper hand they both fall into a rift and Catra disintegrates into nothing. Adora is then only able to restore reality with the aid to Angella, who sacrifices herself to do so. Returning to the moment before the portal opened, Adora destroys the machine. Adora stares down Catra as she makes her retreat and Catra is visible shaken by the intensity of Adora's gaze.

Even before She-Ra and the Princesses of Power aired, people shipped Catradora and were constantly excited for new leaks or trailers involving them. This is because of the immensely popular trope of Rivals to Lovers this ship is following, as well as the show already hinting at their relationship being something more than just friends.

After season 3 aired, Catradora shippers began to question if it was truly a slow burn, enemies to lovers ship that would become canon. The was an exception that season 3 would kick off a redemption arc for Catra which would then lead to the reconciliation between her and Adora. However as the finale took a darker turn and the rift between the two seemed wider than ever, some fans feared that Catra would remain a villain for the whole series. 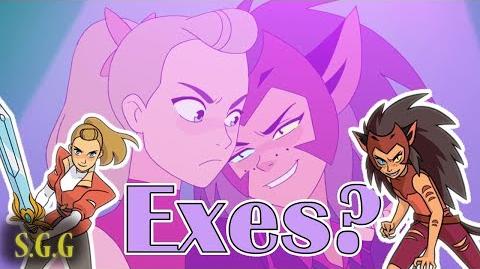 Catradora - She-Ra And The Ships Of Power

Glitradora refers to the ship between Glimmer, Catra and Adora

Retrieved from "https://shipping.fandom.com/wiki/Catradora?oldid=166106"
Community content is available under CC-BY-SA unless otherwise noted.