Celesgami is a het ship between Byakuya Togami and Celestia Ludenberg from the Danganronpa fandom.

The two don't have many moments in canon. In Chapter 2, Celestia agrees with Byakuya's opinion on the students' current situation being a "zero sum game" and comments how a concept of losing doesn't exist in Byakuya's mind. When he responds that at least she can understand him, she comments that's because they're the same - both believe games are meant to be won. However, Byakuya is annoyed by the comparison, as he thinks Celestia tried to say they're on the same level.

During the third Class Trial, Byakuya is able to figure out that Celestia had to be working with Hifumi on the crime, and noticed the suspicious part of Celestia's earlier slip of a tongue, which he used to further prove that she was the second culprit of the case.

The two also share some similar interests. In his second free time event, Byakuya reveals he enjoyed betting on the stock market, which is highly similar to gambling the way Celestia does. Also, one of Byakuya's 'likes' is said to be French, which Celestia clearly enjoys as well, being fluent in the language and being (or pretending to be) of French descent.

“He is right. It's a zero-sum game.”
— Celestia agreeing with Byakuya about their current situation being a game.

“It sounds as if you do not acknowledge even the possibility that you may lose, am I right? You do not speak like the others. Exactly what I would expect from the Togami heir apparent.”
— Celestia about Byakuya not expecting to lose in Chapter 2 of Danganronpa 1.

Celestia – “Do not bother arguing with him. For him, the concept of losing simply does not exist. He is the Ultimate Affluent Progeny, after all—a boy raised to succeed from the day he was born. He considers victory his destiny, and has lived his life accordingly. Tests and challenges are merely ways for him to stand victorious. Even if it is a life-and-death situation. ...Is that not so, Byakuya?”
Byakuya – “At least one of you seems to understand.”
Celestia – “It is because I am the same as you. Games are meant to be won.”
Byakuya – “Are you trying to suggest we're on the same level? Close that vulgar mouth of yours.”
— Celestia and Byakuya about each other in Chapter 2.

Byakuya – “This isn't some stereotypical fantasy world. Tears can't restore a person's vitality.”
Celestia – “You have no tears, do you? No blood in your veins, no calcium in your bones. At least you have your meat...”
— Celestia about Byakuya's lack of empathy in Chapter 3.

“Still, not even one student here stands the slightest chance against me. Well...if it really came down to it, perhaps Byakuya... He seems to have enough worthwhile knowledge that if he were to try very hard, perhaps he could keep up. Unfortunately​... we have not stood as opponents.”
— Celestia about Byakuya in an optional dialogue in School Mode.

Byakuya – “Yes. That's what this whole ordeal is, wouldn't you agree?”
Celestia – “Oh, certainly. A game of survival, you might say. We can pretend to be friends all we like, but in the end, we can't trust anyone.”
Byakuya – “Exactly. So we might as well discard all of these foolish notions of "friendship".”
Celestia – “Here, here. Why delude ourselves?”
— Byakuya and Celestia agreeing with each other in episode 4 of Danganronpa Abridged Thing [1]

Makoto – “Oh my god, would you two just get a room already?”
Celestia – “Excuse me, Naegi?”
Makoto – “You both just keep agreeing on horrifying things and relishing in everybody else's misery! So, seriously, when's the wedding?”
— Makoto about Byakuya and Celestia in episode 4.

Celestia – “You mean that bloodthirsty crucifixion fetishist? I'm a big fan of their work.”
Byakuya – “The very same.”
— Celestia and Byakuya sharing hobbies in episode 4.

Byakuya – “So you didn't even like me?”
Celestia – “Sorry, Byakuya. I was simply stroking your ego, so you'd continue screwing up the investigations for everybody.”
Byakuya – “Fair enough, I'd have done the same.”
— The reveal about Byakuya and Celestia's relationship in episode 6 of Abridged Thing [2]

Although Byakuya and Celestia haven't talked much and they canonically haven't had any romantic relationship, this ship became sort of popular on the Danganronpa fandom. Part of the reason why the ship became popular are the similarities between them, including having a talent related to money, both being rather cold and logical, as well as both being among the smarters students in their class. Another reason for this ship becoming popular is the fact that one of Celestia's "butlers-slash-bodyguards" in her dream, the one kissing her foot, bears a strong resemblance to Byakuya.

Danganronpa Abridged Thing series also played a huge role in spreading the ship's popularity. In this version, Byakuya and Celestia agreed several times about their current situation being a game where everyone's enemies. This led to Makoto Naegi telling them to get a room in Episode 4, Aoi Asahina outright saying she ships them, and Toko Fukawa being against the ship for obvious reasons.

As a result of its popularity, the ship received a significant number of fan fictions written about the couple. In their fan fictions, fans tend to use Celestia's backstory as a girl who hates being unremarkable more than anything and wants to live a special life, pairing her up with Byakuya, as because of his status as an heir of the Togami family, he could warrant her so. Others focus on Celestia's greed, portraying her as a gold digger as a reason to make her attracted to Byakuya because of his status. Oftentimes, as a result of their similarities, they are presented as the only students who can understand each other's mindset.

Most fanfictions and headcanons portray the two enjoying acting superior to everyone else. Many headcanons also have the two combining their money and success to help support one another in their goals and futures. This is, once again, in reference to Celestia's canon dream of living in European castle, which only Byakuya could take a large part in helping with. The couple is often written as being cold and distant to everyone else, then growing to have trust and learn to let their guard downs when alone. 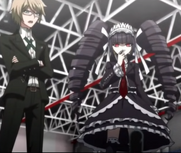 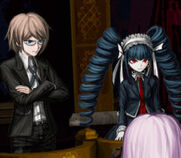