Former Classmates/Friends; both are dead

Celeshiro is the het ship between Celestia Ludenberg and Chihiro Fujisaki from the Danganronpa fandom.

Both Celestia and Chihiro were students of Hope's Peak Academy's Class 78th. Although the two don't have many significant interactions throughout Danganronpa: Trigger Happy Havoc, they are generally nice towards each other, and rarely is there discourse between the two. During the prologue, Celestia suggests that everyone introduce themselves to each other, and Chihiro says that she makes a good point. After an announcement informs the students to head to the gym for the entrance ceremony, they are both among the group that decides to head down right away. Afterwards, when Chihiro suggests that they should all take a look at the handbooks to check out the school regulations, Celestia agrees, saying it would be dangerous to stumble around the school not knowing what the rules are.

Later on, when Celestia tells the others that all they can do is adapt to their current environment, Chihiro appears upset by this, and asks her why they should just accept it, and Celestia tells them that a lack of adaptability is a lack of survivability. When Celestia suddenly excuses herself from the dining hall, Chihiro asks where she's going, and she replies that she wants to take a shower before nighttime arrives. During the first Class Trial, when Chihiro asks which one of them took the knife from the kitchen, Celestia answers that Aoi Asahina is the most likely candidate, as she said she was in the dining hall. In Chapter 2, the remaining students all gain access to the second floor of the school. When Aoi asks Celestia and Chihiro if they would like to go swimming in the pool with her, they both decline, as Celestia hates getting water on her face, and Chihiro doesn't like wearing swimsuits.

Following Chihiro's death, Celestia mentions to Makoto Naegi that she saw Chihiro in the warehouse the night prior. Celestia asked Chihiro what they were doing up so late, but before they could answer, she asked if they were planning to go exercise. Surprised, Chihiro asked how they knew, and Celestia pointed out the blue track jacket that was sticking out of the duffle bag that Chihiro was carrying. Chihiro thanked them for noticing this, before quickly stuffing it back into the bag, and leaving in a hurry. Celestia noted that it was as though they were trying to hide it, and that if they hadn't broken the nighttime rule they had all agreed on, they'd still be alive. She then unsympathetically states that Chihiro had gotten what they deserved.

Celestia – “All we can do is adapt. Adapt to living out lives here from now on.”
Chihiro – “Live here...? Are you saying we should just accept it?”
Celestia – “A lack of adaptability...is a lack of survivability.”
— Celestia and Chihiro about living in Hope's Peak Academy.

“Hm? What are you doing out this late?”
— Celestia asking Chihiro why they are still up.

“Oh, you're right... Thanks.”
— Chihiro thanking Celestia for noticing the track jacket sticking out of his duffle bag.

Celeshiro is not a very popular ship in the Danganronpa fandom, since Celeste and Chihiro don't interact too much. However, it is one of Chihiro's more popular ships, and it rivals Celesaya and Chizono at about the same level of popularity. The ship is liked for the dynamic between a cold and meaner character paired with a soft-hearted and kind character. Celeshiro is often seen as Celeste not being able to resist warming up to Chihiro due to their sweet and pure nature. Some also draw similarities between the Celeste and Chihiro as both hid part of their identity from their class, until it was forced to be revealed.

Another reason for shipping the two characters is they have similar character arcs, Both hiding their true selves from the world, (Chihiro hiding his identity and Celeste hiding her real name), it's possible they could have had more interaction if their lives hadn't been cut short. Though of course we may never know. 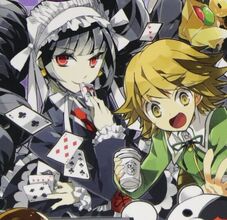 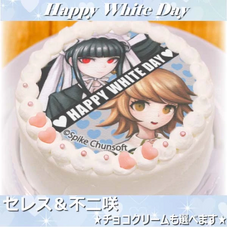