Celouma is the het ship between Celestia Ludenberg and Kokichi Oma from the Danganronpa fandom.

The two never interacted in canon, as they debut in two different sagas of the franchise. However, they do interact in one event together in Danganronpa V3's non-canon bonus mode, Ultimate Talent Development Plan.

In said event, Kokichi approaches Celestia and lies to her about Hifumi dying. However, easily seeing through his lie, Celestia reacts with no concern. When Kokichi continues, Celestia expresses more worry over her purse. After Kokichi admits that he had lied, Celestia claims she was fooled completely, which the former easily recognizes as a lie and adds that he hates liars. Celestia responds claiming that Kokichi's act was actually convincing. The two then proceed to have a conversation about lies and each other's ability to lie. After Kokichi claims she must have been annoyed with his lies, Celestia claims that her heart can't be shaken by others lying, as she has to deal with it a lot in gambling. Kokichi then asks if that means she hates when people are being truthful with her, mockingly referring to her with her actual name, Taeko. However, she says that dealing with lies only would be tiresome, to which Oma responds that she's lying about her statement and that's why he enjoys talking to people like her. The Ultimate Gambler realizes his claim was a lie too. As a response, the Ultimate Supreme Leader confirms that it was indeed a lie...only to add that this confirmation might have been a lie too. Upon hearing this, Celestia suggests a game of lies for the two with their lives on the line.

The similarities between them include both being compulsive liars, with Celestia having to lie in gambling, having a title of "Queen of Liars," using a fake name, and faking her calm composure; and Kokichi being a trickster who often mockingly lies to the others, hides his feelings and intentions from the others, pretends to be much more villainous, lies about his talent, and even claims to be the mastermind of the Killing School Semester.

Celestia – “Kokichi...are you perhaps interested in a game of lies? If you are willing to bet everything you own, I would not mind being your opponent.”
Kokichi – “Oh, sounds great! Let's play a game with our lives and possessions at stake!”
— Celestia and Kokichi agree for a game of lies with each other.

The ship sailed as a result of both characters being the liars of the cast, with Celestia's talent as the Ultimate Gambler gaining her the title of a "Queen of Liars," and Kokichi's character himself being the embodiment of a lie.

While at first the ship originated from the two being "foil" characters to each other, V3's bonus mode provided some interactions between the two, which only fueled the ship even more. In fact, this ship turned out to be one of the most popular ships that emerged from the aforementioned bonus mode.

Naturally, as a ship resulting from the similarities between two characters from different casts and a bonus material, it is still a minor one. It's nowhere near as popular as both characters' main ships, especially ones such as Oumasai.

Fan fictions and fan arts often tend to reference the "game of lies" between the two that was mentioned in their only interaction in the game. 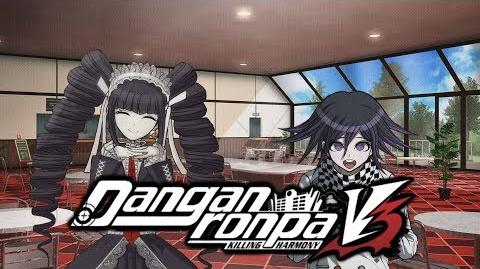 Retrieved from "https://shipping.fandom.com/wiki/Celouma?oldid=136452"
Community content is available under CC-BY-SA unless otherwise noted.