Chabahara is the het ship between Shuichi Saihara and Tenko Chabashira from the Danganronpa fandom.

Tenko and Shuichi's interactions are largely categorized by their combined social awkwardness and Tenko's aggression towards men.

The first time the two interact during the Killing School Semester is when Kaede Akamatsu and Shuichi explore the school and introduce themselves to their new classmates. Upon meeting Tenko, Kaede calls her cute and asks if Shuichi agrees. He complies hesitantly which instantly causes Tenko to react negatively and explain that she hates being praised by "degenerate males." Tenko then warns she will not hesitate to throw a "degenerate" across the room if one ever tries to touch her.

Later on in the first investigation, Tenko becomes annoyed with Shuichi after telling her everyone needs to work together regardless of gender. During this chapter's trial, Tenko believes Shuichi is suspicious and believes him to be the culprit of the first murder. Her reasoning for this is that the amount of time he spends silent is "classic degenerate male behavior."

In chapter two, Shuichi stops wearing his hat in memory of Kaede. Tenko defends his decision to the other students and tells them not to be insensitive. They have another moment in this chapter in the form of a bonus scene, where Shuichi and other students join Tenko for her "celebrity-like vacation" in the pool area. The next day both Tenko and Shuichi are unwillingly subjected to the Insect Meet and Greet. A CG displays them reacting with similar levels of panic and desperately attempting to flee the Ultimate Entomologist Research Lab.

In chapter three, Tenko's Akido Master Research Lab is revealed. Tenko, Shuichi, and Himiko Yumeno were the first to explore her lab. Excited to have her own dojo, Tenko announces sparring here will be very enjoyable before grabbing Shuichi and throwing him down on the mat. Shuichi obviously does not appreciate the gesture, but with this action Tenko is able to determine Shuichi is burdened by self doubt. She tells Shuichi he lacks self-esteem and that is why he lacks strength. While his confidence is improving, he is still uncertain. Tenko is apparently able to determine such things about people by sparring with them, as she then proceeds to throw Himiko as well.

Later in the chapter, Tenko approaches Shuichi and Maki Harukawa to beg for them to help stop Angie Yonaga from performing an occult ritual. Shuichi and Maki comply and the three set off to try to put a stop to Angie's plan. The three fail and soon after, Tenko gets in an argument with Himiko and Shuichi steps in to get her to stop irritating the other girl. Tenko is soon overcome with fear that she ruined her relationship with Himiko, though Shuichi and Maki think otherwise. The three bid each other goodnight and reconvene in the morning to try to convince Angie once again. The only interactions Tenko and Shuichi have after that are carrying out the seance that causes Tenko's death.

Tenko and Shuichi's first free time event begins with Tenko hissing and growling. Shuichi is confused and asks what she's doing. When she explains she's attempting to intimidate him because he's a "degenerate male", he is refreshed by her honesty. Tenko then accuses Shuichi of trying to get rid of her so he can go harass other girls. After denying the accusation, Shuichi accidentally evokes Tenko's wrath by asking why she hates men. This sends her off into a rant that Shuichi attempts to calm her down from. He then makes the mistake of grabbing her shoulder, causing her to throw him to the ground. The conversation devolves into more screaming before Tenko threw Shuichi several more times, causing him to pass out. After Shuichi lost consciousness, Tenko carries him to his room, likely out of guilt.

In their next free time event, Tenko apologizes and insults him at the same time. She continues to be unable to decide between complimenting and criticizing Shuichi. After that she begins to teach Shuichi the origins of Neo-Akido and attempts to get him to participate.

As they grow closer and Tenko shares more about her interests and how they link to her values, Shuichi realizes how gullible Tenko can be and becomes concerned about her.. He's even the one who exposing the hypocrisy of her view of men.

Although Tenko remains critical of men, she realizes that some of them are good people. She thanks Shuichi for helping her realizing the truth and tells him that even if he's a boy, she sees him as a good person.

Tenko then attempts to shake Shuichi's hand but cannot bring herself to touch him. This causes her to beg Shuichi to get a sex change, which Shuichi refutes. Tenko offers up the solution that it will be okay to shake hands if Shuichi masters Neo-Akido in that moment.

In Tenko's Love Suite Event, she calls Shuichi "Brother Shuichi". Shuichi is reasonably confused, and Tenko explains she means it is a title akin to "comrade", used because she takes pride in their bond forged by Neo-Akido. In her fantasy, Shuichi is her senior disciple that she engaged in a sparring match with earlier that day under the condition that whoever won could do whatever they want to the other. She compliments his strength, saying there was no way she could have won against him. She is extremely eager for the bet to begin, exclaiming "my body is ready!!"

Shuichi hesitates, unwilling to command Tenko. This delights her, to which she responds "Ooh! So wonderful! I knew you'd say that, Brother Shuichi! You're nothing like those other degenerate males that only fantasize about making love to girls!" She continues to goad him but Shuichi tells her that he doesn't want to do anything to her, and by doing anything he can technically do nothing. Tenko then says that she respects Shuichi for being noble, but then gets angry, calling him an "insensitive degenerate male" for not wanting to do anything to her. She then admits that she loves him and made a bet with him just for that reason. After that she finally yells out her feelings and says that she'll continue to love him no matter what and that she wants to be his and his alone. In the end, she says that she'll always be ready for Shuichi no matter what, any time in any place she'll be ready.

Due to Tenko's hatred towards men, Chabahara is considerably unpopular compared to ships like Tenmiko, Saimatsu, and Saiouma. Chabahara, like other Tenko/Male Character ships, tends to be controversial amongst fans due to the common headcanon that Tenko is not attracted to men. Despite this, some fans believe Shuichi's kind nature and willingness to spend time with Tenko despite the danger of physical harm gives them a chance. Shuichi's ability to reason with Tenko and get her to see the error of her ways also provides potential for Shuichi to help Tenko form healthier relationships with other men.

Running away from insects 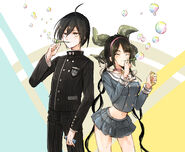