• Stalker with a Crush

Cherosie is the femslash ship between Josie and Cheryl from the Riverdale fandom.

Josie and Cheryl are good friends at the start of their sophomore year, although at times their friendships appears to be more of a power liaison. Both are popular in the high school social hierarchy, Josie as the lead singer of town famous band Josie and the Pussycats, Cheryl as the Head Cheerleader of the River Vixens and the only daughter of the richest family in Riverdale. Cheryl's brother Jason is presumed dead in mid-July, and when they returns to school, Cheryl insists that the back-to-school dance still happen, along with Homecoming. Cheryl asks Josie and the Pussycats to perform at the back-to-school dance, which Cheryl hosts in honour of her brother.[1]

After Archie helps out Cheryl, she grants him a favour and Josie agrees to let Archie sit in on her band's rehearsals only because of her friendship with Cheryl. For the Homecoming celebrations, Cheryl, as the Head of the River Vixens, presents Josie and the Pussycats as they perform on the football field.[2] Later in the Autumn, when Polly's lost Josie helps Betty look for her in the woods, while Cheryl is looking with her family, but the Cooper/Blossom feud doesn't seem to affect their friendship.[3] When Cheryl almost drowns in Sweetwater River following the revelation of her brother's murderer, Josie thanks Cheryl's rescuer, Archie, by agreeing to have Josie and the Pussycats perform one of his songs.[4]

Josie joins the cheerleading squad The Riverdale Vixens, likely without an audition, probably due to her relationship with Cheryl. Both are power brokers who live in the spotlight, with Josie actually requesting to be the centre of attention if she's to stay with the Vixens. When Pop's is in trouble following the shooting, Betty blackmails Josie and the Pussycats into performing at a Retro Night to help Pop's. As Valerie's sick, Cheryl steps in ready to perform, which Josie isn't entirely happy with, but reluctantly allows it all the same. They perform atop Pop's Chock'lit Shoppe to a cheering crowd.[5] When an acquaintance of Veronica's from New York rolls into town, he insists on throwing a party in celebration of Josie and the Pussycats, with Cheryl inviting herself along. Cheryl and Josie, along with the group, says yes to take Jingle Jangle at the party. Cheryl attends a gala for the new Lodge project on the Southside, where Josie and the Pussycats perform, along with Veronica. Cheryl's drugged and almost raped by Nick St. Clair, but Veronica keeps an eye out and she, Josie, Melody and Val all come to Cheryl's rescue before anything happens and beat up St. Clair. Josie comforts Cheryl at the hotel with the others afterwards, while they talk about what can be done.[6]

Cheryl thanks Josie for being there for her, saying that's why she's pushing for Josie to get a record deal through a contact Cheryl gave the tape of their 'Milkshake' rendition to. Meanwhile, Josie's getting creepy 'secret admirer' teddy bears with notes like 'I'm watching you' and her mother's getting death threats which involve Josie. After spending some time with Chuck Clayton, who has changed his behaviour, Josie receives a box with a pig's heart and a drawing of her saying 'if I can't have you no one can', prompting Josie to allow Chuck to be blamed for it and later told not to be around Josie. It turns out that Cheryl has developed an unhealthy infatuation with Josie and is the one threatening her while trying to eliminate the competition.[7]

Cheryl starts trying to actively get closer to Josie by offering her a massage in the girls' locker room, which Josie seems uncomfortable with. Despite this, they continue to hang out, with Cheryl pressing on about Josie's solo career following her split with the Pussycats. Josie tells Cheryl about a gig Reggie's gotten her at his Dad's dealership, a continuation of Josie and Reggie's flirtation. Cheryl tries to shoot it down because she's jealous and when it doesn't work she acts out in front of Josie, but directs it towards FP Jones instead, although Josie's shocked.[8] Josie and Cheryl both attend the Pickens Day celebration, though not together.[9] In the Spring, Cheryl invites Josie, along with Toni, Veronica and Betty, to a sleepover at Thornhill. Cheryl confides to the girls that she's afraid of being alone in the house, as she overheard that her uncle and mother have it out for her. They're all woken in the middle of the night by what appears to be Nana Rose having fallen down the stairs, increasing Cheryl's fears that she's unsafe.[10]

Following the sleepover, Cheryl's sent to the Sisters Of Quiet Mercy and Toni notices her absence, asking Josie and Veronica at Vixen practice for help finding Cheryl. The trio go to Cheryl's house and talk to her mother, Penelope Blossom, who, in an effort to derail the group's fondness for Cheryl, shows Josie the picture Cheryl drew of herself and Josie. Recognising the drawing from her stalker in the Autumn, Josie is horrified at having been lied to and manipulated all these months by someone she thought was her friend. Josie leaves and tells the others that she can't continue to look for Cheryl.[11] After Cheryl's rescued from the SOQM, she promptly takes Josie's starring role in the school musical, with Kevin for some reason not objecting. Despite this, Josie stays in the musical and has to perform a number with Cheryl. Understandably, Josie is both fed up with and shows disdain for Cheryl, who hasn't even attempted to apologise. When Cheryl finally notices, she tells Josie she's sorry and provides the explanation that she was struggling and never wanted to hurt Josie, but was in a dark place. Josie forgives Cheryl and they hug and become friends again.[12] At the end of the school year, Cheryl attends Archie's swearing-in ceremony as Student Body President, where Josie performs the National Anthem a capella.[13]

Cheryl spends most of the summer away with Toni, and returns to Riverdale just as school is about to start up again. She throws a back-to-school pool party, which Josie attends.[14] When Cheryl and Veronica fight over the Student Body Presidency, Josie calmly steps in to tell Cheryl to take it easy on Veronica since Archie's in juvie, indicating that Josie has experience with and understands how Cheryl goes overboard and knows how to handle it. As a favour to Veronica and part of the Vixens, Josie and Cheryl perform a cheer routine for the guys in juvie.[15] Josie agrees to be the headliner at La Bonne Nuit, Veronica's speakeasy. Cheryl attends opening night and watches Josie's first performance.[16] Both Josie and Cheryl help the team effort to break Archie out of juvie and promise to keep his location secret.[17] When Sheriff Minetta questions the students on Archie's whereabouts, Josie suffers a violent seizure, at which Cheryl screams and jumps up to help Josie, telling Minetta to stop hassling Josie.[18]

Basically these are two Slytherins in alliance. Cherosie was the most popular femslash pairing for Josie until Season 2, where the series used the problematic "bi/lesbian is obsessive and dangerous, especially for straight people" storyline, with Cheryl stalking Josie and ruining Josie's life, making Josie a victim of their relationship and Cheryl an unstable creep who ruined her friendship. Cheryl has since become an ongoing problematic character, who is abusive towards specifically black characters on the show (Josie, Toni and Chuck).

There was never any proper consequences for Cheryl's behaviour and the fandom was outraged as this misrepresentation of the LGBTQIAP+ community, as well as a relationship that was positive, if barely seen, in Season 1. The friendship has somewhat returned to status quo in Season 3, with Josie and Cheryl being friends, if not mentioned as being as good of friends as was often mentioned in Season 1. Shippers of Cherosie are still angry that the show ruined the relationship and the potential for more.

Cheryl and Josie at Riverdale 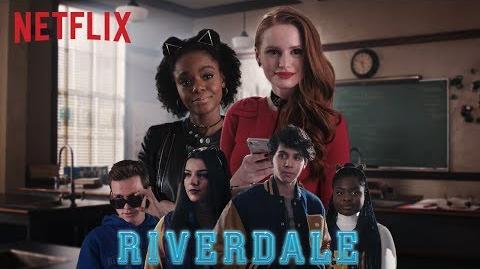 Retrieved from "https://shipping.fandom.com/wiki/Cherosie?oldid=153620"
Community content is available under CC-BY-SA unless otherwise noted.