ChiLumi is the het ship between Tartaglia and Lumine from the Genshin Impact fandom.

Lumine first meets Childe in 'Archon Quest Chapter 1 Act 1'. Lumine is escaping to avoid suspicion of being the culprit of Rex Lapis' murder. When she was at the stairs, she stepped on shard of glass accidentally grabbing the guards attention. Unfortunately, she gets surrounded by the guards until she hears Childe's voice saying "Hey girlie-- Hold still," or in the Japanese dub Childe calls Lumine "ojou-chan". Childe then knocks all the guards unconscious and escapes with Lumine. After both Paimon and Lumine are exhausted from running, Childe formally introduces himself. Of course, that wasn't his real name but an alias of sorts. Paimon and Lumine figured that Childe is one of the Fatui. Childe claims he isn't here for trouble, but is here to help them. Childe trust Lumine for not killing Rex Lapis since he's been keeping eye on Lumine. Childe has gave Lumine a fake Sigil of Permission created by the Fatui, and the story continues.

Lumine enters The Golden house to check on Rex Lapis' Gnosis. There she sees Childe who also had his eyes on Rex Lapis' Gnosis. Childe then challenges Lumine to a battle. Lumine successfully defeats Childe three times throughout three stages, but Childe wasn't finished. With all the Sigil of Permissions that the Fatui have been reproducing Childe summons Osial, Overlord of the Vortex.

On July 20th 2021, Tartaglia gives Lumine 5 frozen meat and starsilver, as well his specialty dish, a prize catch. In his birthday mail he mentions if Lumine can come by to Dragonspine.

“Hey, pal! How have you been? You must have traveled far and wide since we last saw each other, right? For me, I can only seek out some entertainment for myself. These past couple of days, I've used a work opportunity to explore Dragonspine and seek out some local specialties. I hope they will be of use to you. The harsh cold of the snow-capped mountains is reminiscent to the scenery of my hometown... Sigh, I've had many mundane days that makes me nostalgic of our time together. Whether it's a fight or a challenge, I always feel that having you around is what makes life really interesting. Haha, to be honest, I've been planning a special day to meet up with you, today could be that chance! If you have no special plans, how about you swing by my place?”

Chilumi is a popular Het ship in the Fandom. Many people began to ship them when Childe saved Lumine and because of the "Hey girlie" , and the ship became even more popular because of the Childe Story Quest, in which Lumine is befriending Childe and is promising Childe to visit him and his Family in Snezhnaya.

There is also a lot of Fan content for Chilumi, such as; Fanfiction's, Comic dub's and Fan art. With the ship Aether (Lumine's brother) is portrayed as very overprotective of his sister. Same goes with Childe. Some fan art can be seen with Childe comforting Lumine. On AO3 Chilumi has over 1000 fanfictions, it's the third most popular relationship and most popular het ship on the Genshin Impact tag on AO3.

This ship currently rivals ChiLi, which is the ship between Childe and Zhongli, as well it happens to be one of Childe's most popular ships. There also is a Poly ship between Lumine, Childe and Zhongli. Chilumi tends to be controversial depending on fans as Lumine has no official age so a few fans decrypt Lumine as a minor while the other thinks Lumine is an adult. Confusion began to stir up when Lumine's English VA said Lumine was most likely 16 years old, which made the hate against the ship worsen, however it was then revealed to be an assumption from her VA and apologized as MiHoYo stated nothing about having a physical age.

After the release of the new archon it's revealed Lumine is five hundred years old, it still caused some controversy as those who oppose the ship earlier on believe despite the number of her age, as they believed Lumine 'still' has a body of a minor due to her looking short and young. However these theories were debunked in Diona's Hangout as Lumine mentions just because she looks young doesn't mean she is and is actually more older than the way she looks, debunking her being underage, as well with the Play Station wings lore backing up the claim. 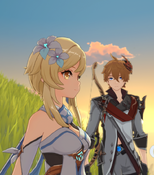 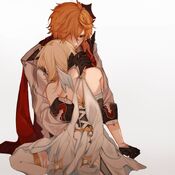 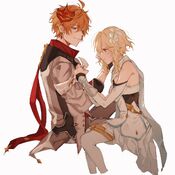 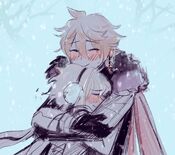