Creation and Creator (with AI Chiaki)
Friends (with real Chiaki); both are dead.

Chiakiro is the het ship between Chihiro and Chiaki Nanami from the Danganronpa fandom.

Before her execution, AI Chiaki refers to Chihiro and Alter Ego as her and Monomi's father and big brother respectively, after being asked by Monomi where her personality came from. In Chapter 6, it has been revealed that Chihiro was one of the three creators of the Neo World Program, including the Observer. However, Episode 12 of Future Arc reveals that while Chihiro created the Observer, its identity as Chiaki came from who the students of Class 77-B wanted to see the most again.

Despite some fans' predictions, the two don't interact with each other on-screen in canon. This is because Despair Arc didn't cover the creation of the Neo World Program. However, the two have an event together in the bonus mode of New Danganronpa V3, Ultimate Talent Development Plan. They talk about games and programming while drinking tea and mention that both have been busy in their rooms lately, Chihiro with programming and Chiaki with gaming. Chiaki also says she respects the programmers for creating games. They also have one event together in Danganronpa S: Ultimate Summer Camp, which they share with Maki Harukawa.

“Maybe from our dad and our big brother...don't you think?”
— AI Chiaki referring to Chihiro and Alter Ego as her and Monomi's dad and big brother respectively, after being asked where her personality came from.

“I don't really mind. I... did have a family. My father.”
— AI Chiaki referring to Chihiro as her father in her second Free Time Event with Hajime.

“Yeah...good job on your project. Programmers are amazing. You've got my respect.”
— Human Chiaki respecting programmers, including Chihiro; in their Ultimate Talent Development Plan event.

“Because my favorite games wouldn't exist without programmers. It's a wonderful job that can create many different things.”
— Human Chiaki explaining her respect for programmers in her winter event with Chihiro in Ultimate Talent Development Plan.

The two are shipped together for having technology-related talents that can work together, with Chihiro being the Ultimate Programmer and Chiaki being the Ultimate Gamer, thus allowing Chiaki to play games which Chihiro would program. Both of them being moe type of characters also helped. Their interaction in the Ultimate Talent Development Plan further fueled this ship.

Considering Chihiro was one of the creators of the Neo World Program and the AI version of Chiaki, some fans prefer it as a sort of a familyship instead. This familyship may also include Alter Ego and Usami as its members due to Chihiro's aforementioned role. Some fans were disappointed that Despair Arc didn't cover the events surrounding creation of the Neo World Program, with part of the reason being hoping there would be some interactions between Chihiro and Chiaki.

With the reveals of Danganronpa 2's Chapter 6, fans believed that Chihiro was directly responsible for creating AI Chiaki, especially since she called him her father once. However, Hope Arc revealed that while the Observer was a part of Neo World Program, its identity was formed through the Remnants' memories of a person they wanted to see again the most.

With the same reveals, some fans believed that Chiaki's first name came from Chihiro's full name, with Chi coming from Chihiro and aki coming from Fujisaki. Although it can still be the case for producers of the game in real life, the theory was debunked in-universe with the reveal that a human version of Chiaki with no relation to Chihiro also existed. 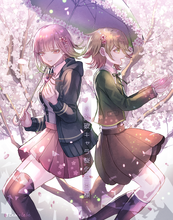 Oumasakinami refers to the ship between the two and Kokichi Oma.