Chicer is the family ship between Tartaglia and Teucer from the Genshin Impact fandom.

Traveler firsts sees Teucer with a ruin guard, then Traveler went to Northland Bank since that was probably where Teucer's brother is and it was. Teucer ran to Childe while yelling that he finally found brother (Childe). Childe knew that voice and was also happy. Although Childe realized how did Teucer get to Liyue Harbor. Teucer told him that he saw a boat that was selling toys so he thought Childe was there. Childe tells Teucer that it was extremely dangerous, he was happy to see him again but since it was also dangerous so Teucer promised him not to do anything like this ever again. Paimon asks Childe of something that Teucer said, Teucer said that Childe was a toy seller, although Childe was one of the Fatui Harbinger so Paimon was cutted when Paimon said one of the Fatui Harbinger. Childe then whispers to the Traveler saying that he only told him that so he'll look up to him, he doesn't want his family to do anything with Snezhnaya's darker side. Childe then asks the Traveler to humor him in front of Teucer if they would be so kind.

The Traveler then babysits Teucer as said by Childe. When the Traveler took Teucer to the wharf, Teucer mentions that his brother always bring a huge toy when it is his birthday, some of them are Commodore Hook, Blacksteel Jack, and Iron Tony. They also keep them in their backyard. When Teucer went to the fishmonger, Teucer said that fishes in Liyue are small, Paimon asks Teucer how big are the fishes that he is used to. Teucer says about 200 times of Paimon's size. Teucer then mentions that when he told his brother about it, he then went out the sea to catch him. And when he came back, he had a humongous fish slung over his shoulder. Teucer was so happy about it. When Teucer went to see the boats, he then says that he misses his brother and asks the Traveler to take him to see his brother, he doesn't wanna play anymore as well.

When Traveler and Teucer went to go see Childe, Childe was talking to the Treasure Hoarders, Teucer ran to Childe again while yelling brother. Teucer then says that he always wanted to see Childe working, Childe then says why yes of course therefore that he is the greatest toy salesman in Snezhnaya, The Treasure Hoarders laughed off, Teucer thought that Childe was spreading joy and laughter. After Childe finished the initiation test, Childe told Teucer that he had to go since a lot of people are waiting for him. While the Traveler and Paimon were talking, Teucer was gone, Teucer went to where Childe was at so the Traveler then went to find Teucer. When they found Teucer, Teucer said Quiet since Childe was in a speech. While Childe was doing his speech, he saw Teucer and the Traveler and that was where Childe didn't want Teucer to know about Snezhnaya's darker side so Childe had to change his speech for Teucer. Childe then went to the Traveler and Teucer. Teucer was amazed by Childe, so Teucer then said he wanted to fight as well, Childe tells Teucer that he will teach him fighting techniques.

Childe proceeded to say that it is time for Teucer to go back home but Teucer didn't wanted to. Teucer then says to take him to the Institute of Toy Research so Childe did. When they went inside, Teucer straight up went and the door closed, Childe and the Traveler was outside of the door, they had to get back to Teucer. When they finally found Teucer, there were Ruin Guards, Childe then said why not play hide and seek now, although Teucer didn't want to at this time but Childe said he'll have a surprise, so while Teucer was counting, Childe then fought the Ruin Guards, after Teucer finished counting, the Traveler then found Childe sitting. Childe then gave the Traveler a small Mr. Cyclops toy for Teucer so the Traveler then gave it to Teucer, Teucer was happy. So when they went to the Northland Bank, Teucer then went home.

In the Genshin Impact fandom, Chicer is treated as a family ship as Teucer is both underage and related to Childe. But There are some fanarts of the two of them smiling as happy siblings. Teucer is one out of Tartaglia's named three siblings. 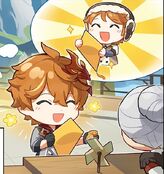