The three of them do not have very many interactions in Danganronpa: Trigger Happy Havoc as a trio, due to Chihiro's quick demise. However, they do each have a few interactions together. All three of them are students that arrive early to the morning meetings. Sakura agrees with Chihiro when they talk about how fighting amongst themselves only helps the mastermind and Aoi can be seen comforting Chihiro when they are upset over executing Leon.

In chapter 2 when the pool room is opened, both Sakura and Hina train together, and they ask Chihiro on multiple occasions if they want to join. Chihiro denies, due to the complications of their identity. Chihiro also laments over how weak they are, due to something Mondo said previously, and Aoi tries to help by telling Mondo to stop yelling at them. Chihiro says that they're considering working out, and Sakura offers to help. Hifumi comments that Chihiro would get smashed to pieces, and Aoi tells him to shut up. Chihiro thanks them.

When Chihiro is found dead in the girl's locker room, Sakura expresses regret over not being able to protect them. Hina mentions to Makoto that she regrets not spending enough time with Chihiro before their death.

Meanwhile, in the Danganronpa The Animation Comic Anthology, Chapter 6: Badminton of Despair, Aoi invites a number of people to play badminton with her and Sakura. Chihiro wants to participate, but is hesitant. Aoi reassures them that they can participate, and the match begins with Sakura slamming the birdie into the wall. Chihiro fawns over her, blushing and saying it was amazing. Next up is Chihiro's turn, and they say that they're probably too weak to hit it. Sakura puts a hand on their shoulder and says that she'll promise to help the play. Aoi reassures them as well, saying that everyone was here for them, and that they'll never do anything to make them sad. Chihiro eventually hits the birdie, with Aoi cheering them on, and Sakura helps to get it over the net for them.

People ship Chisakuraoi likely due to the fact that Chihiro wanted to be stronger, just like Sakura and Aoi were, and both girls were willing to help them be so. It's a popular headcanon that Chihiro trains with Sakura and Aoi in order to get stronger like they wanted in non-despair AUs. There are even a couple AUs where Chihiro asks Sakura or Aoi to train with them instead of Mondo in chapter 2, therefore preventing their death.

Chisakuraoi is most popular in circles where Chihiro is headcanoned to be transfem, and both Sakura and Aoi have complicated relationships with their feminity as well: Sakura worries that showing her more feminine side might make people see her as less of a warrior, and Aoi worries that people will judge her for not being feminine enough, even though she has no desire to be.

Another thing that might draw people to Chisakuraoi is the difference in personalities. Sakura is stoic, gentle and contemplative. Chihiro is timid, intelligent and compassionate. And finally, Aoi is loud, encouraging and fun-loving. Each of their personalities fit well together, and their relationship would be very supportive due to all three of them being very kind. Additionally, there is a height difference between all three of them, with Sakura being the tallest at 6'4" and Chihiro the shortest at 4'10".

The ship isn't a very big one in the fandom, and can only be found in small circles. The polyship Chishimondo is more popular for Chihiro, and as is Sakuraoi, Aoi and Sakura's relationship alone. 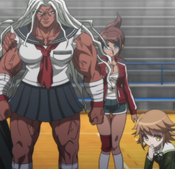 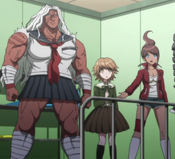 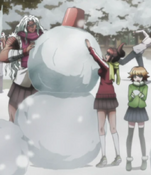