Chlodrien is the het ship between Adrien Agreste and Chloé Bourgeois from the Miraculous Ladybug fandom.

At a young age, Chloé was Adrien's only friend and after his mother "disappeared" his father refused to let Adrien leave the house, in which kept him from spending time Chloé at her house. Because Adrien knew that Chloé's bitterness is from a time when she left angry, he tries to be understanding with her but there are times when he tells Chloé to stop being mean to other people. Their childhood friendship is one of the things that sparked Chloé's obsessive crush on Adrien, while he simply views her as a friend. Even though Adrien, as well as the rest of Paris, is aware of Chloé's occasional, superheroin identity as Queen Bee, Chloé has no idea that Adrien is in fact Cat Noir.

When Adrien heard that Chloé is leaving Paris to live with her mother in New York, he became sad of the fact while everyone since celebrated. He tells Marinette how she was his only friend growing up and that there were times where she was nice before becoming angry and bitter when she left his home one day. After Chloé's father was akumatized into Malediktator and placed Cat Noir under his spell, Chloé is given a second chance to become Queen Bee again so she can help Ladybug save her partner by defeating Malediktator. Sometime after the akumatized villain was defeated and Chloé choice to stay in Paris, Adrien helps Marinette and a few of their friends to throw a party in Chloé/Queen Bee's honour.

In "Miracler", Cat Noir could see that Chloé keeps waiting for him or Ladybug to call on Queen Bee whenever there is trouble, without realizing that her superheroin days for over. Since Hawk Moth knows who Queen Bee really is, the main due have decided that for Chloé and her loved ones own protection it would be best that they don't entrust with the Bee Miraculous again. Before Ladybug leaves, when she is about to run out of time, Cat Noir asks her to tell Chloé as it didn't seem fair that they are un-attentionally making Chloé feel like they are neglecting her. After Hawk Moth failed to akumatize Chloé, again, he goes after Sabrina in an attempt to bring Chloé to their side, as well as to obtain her and the other Miraculouses when Cat Noir and their allies became to her aid. An injured Cat Noir tries give the comb shaped Miraculous to her so Queen Bee could help them, one last time, Mayra takes it from him and was about to bring it back to Hawk Moth if is wasn't for Ladybug, Rena Rung and Carapace coming to help them. Even though Queen Bee has helped her fellow Miraculous holders defeat the titled villain and had turned down Mayra's officer, that she didn't tell them about, Ladybug finally told her the sad news that her days as Queen Bee are over, Chloé didn't put up a fuss in handing it back. She and Sabrina even went to play their game and because Chloé has lost respect for Ladybug, she plays Cat Noir for a change.

Even though Adrien was invited to the wedding anniversary of the Bourgeois couple, his focus of escaping with Marinette and Kagami kept him and Chloé from interacting with one another. After her parents were akumatized, Chloé wanted Cat Noir or Ladybug to call upon Queen Bee's help again but end up seeing the cat-themed hero being assisted by the new dragon-themed hero and becomes upset by it. Earlier on Hawk Moth and Mayra had set up events that will help them to convince Chloé into joining their, and she does. To make Cat Noir and Ladybug pay she allows Hawk Moth to akumatize her into Miracle Queen, and thanks to Aqua Plagg Adrien is able to avoid Miracle Queen's mind control wasps. Like the last the two times Chloé was akumatized, Cat Noir is forced to fight Miracle Queen and her mind controlled puppets in order to get his childhood friend again. Because Queen Bee's anger caused the kindness she was slowly developing to faded away and still wants to help Hawk Moth defeat the main duo, Chloé could never be intruded with the Bee Miraculous again.

The ship could simply be do to a rare number of fans who simplify Chloé's crush on Adrien, and believe that her slow, growing kindness and their childhood friendship deserves her a chance at his heart. However, most seem to prefer it platonically than romantically.

Before Chloé had her first officially appearance as Queen Bee in season two of the Miraculous Ladybug series, the earlier revealed leaks of a Bee-themed superheroine and fans' much later conformed suspicions of the future Bee Miraculous holder and user being Chloé had gotten fans of the ship to place Chloé as her superheroine self.

Despite the fact that Hawk Moth and all of Pairs knowing who Queen Bee really is and it being the main reason why Ladybug made the hard choice of not entrusting Chloé with the Bee Miraculous again, for Miraculous and her loved ones own protection, one of the season 4 leaks shows that Chloé will be intrusted with the Bee Miraculous again, while her Queen Bee outfit appears to have changed a bit. Since Timetagger reveals that during the time of their adulthood, Ladybug and Cat Noir will be facing a different holder of the Butterfly Miraculous, as well as the fact that the main due will assemble a team that might have Chloé one of its members.

On AO3, Chlodrien has over 299 fanfics. 82 on the romantic side of the ship while the friendship side of it has over 217. 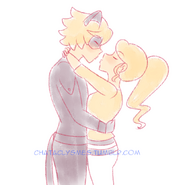