Childhood Friends/Acquaintances; dislike on Chongyun's side

Chongtao is the het ship between Chongyun and Hu Tao from the Genshin Impact fandom.

Chongyun and Hu Tao have yet to be seen interacting in canon, they have been shown to have known eachother since they were both young children. In Chongyun's voiceover lines, he expresses his dislike for Hu Tao and claims that her smile makes his blood boil. Chongyun believes that her dismissive smile towards the duties of an exorcist is insulting his entire family lineage. On the other hand, Hu Tao doesn't seem to feel negatively towards Chongyun, rather she is confused as to how one person can have so many yang energy with an absence of yin. They have opposing character traits, Hu Tao is funeral director who has fun connecting with spirits and ghosts, while Chongyun comes from a lineage of exorcists, but has yet to see a spirit himself. Hu Tao has the elemental power of fire while Chongyun has the power of ice.

In Hu Tao's character stories, it states that Chongyun was pulled in to empire the poetic spars she had with Xingqiu. It is implied that despite his initial dislike of Hu Tao, he finds the antics of her and Xingqiu amusing. Hu Tao is not mentioned in any of Chongyun's character stories.

Hu Tao, Xiangling, Chongyun, and Xingqiu were seen playing together in a flashback as children, implying they may have been friends when they were younger. Xiangling and Xingqiu are still close friends of Chongyun, the three of them may have grown apart from Hu Tao. The four of them were featured on Hu Tao's first banner.

“The Wangsheng Funeral Parlor is a reputable institution that acts with integrity. But whenever I see that cheeky smile that says, "It's nothing you exorcists need to worry about," it just makes my blood boil... Whoa, deep breaths, Chongyun. Stay calm.”
— Chongyun’s voiceline, About Hu Tao

“All yang and no yin? Who knew such people existed in this world.”
— Hu Tao's voiceline text About Chongyun

“Positive energies is unity between yin and yang... Who knew such people existed in this world.”
— Hu Tao's actual voiceline, About Chongyun

A lot of the fan content around Chongyun and Hu Tao revolve around an initial antagonism between them, with Chongyun being repelled by Hu Tao's pranking and irreverence and Hu Tao being perplexed by how strict with himself and seriously Chongyun is. There are shades of enemies to lovers to this pairing, as they gradually come to find out that they have more in common than they thought and warm up to each other romantically, especially from Chongyun's side.

Chongtao is considerably a rarepair ship. It doesn't get much attention due to more popular rival ships such as Xingyun and YanTao. Chongtao has a growing selection of fan art on various social media platforms. The Chongtao Twitter hashtag contains over 9k likes in total. Chongtao isn't very popular, but it manages to have 82+ romantic works and 77+ gen works on AO3. 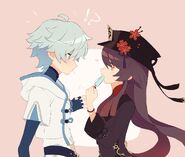 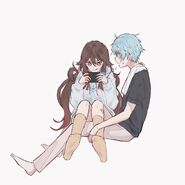