• Stalker with a Crush — In the Loonaverse, Chuu is this to Yves in "Heart Attack"

Chuuves is the femslash ship between Yves and Chuu from the LOONA fandom.

LOONA is a 12 member South Korean girl group formed by Blockberry Creative. The group is famous for it's unique pre-debut project. Starting in October 2016, a new member was introduced with a solo single and music video release every month over the course of 18 months.

The group is known for its continuous storyline and world-building. Every release and music video is part of a fantastical storyline set in the fictional universe where all the members reside. The main plot revolves around their struggle to find each other upon being scattered to different parts of the universe. In LOONA's mythos, all the subunits live on different sides of a möbius strip and in different realms.

Chuu and Yves are members of the sub-unit yyxy, along with Go Won and Olivia Hye. In the LOONAVERSE, they both reside within the Garden of Eden.

Chuu's first appearance is within her solo song, "Heart Attack". She has fallen completely in love with Yves. Throughout the video, she constantly follows Yves and sings the English lyrics "You attack my heart". Despite Chuu's interest, Yves doesn't acknowledge the other girl for most of the video. Chuu even attempts to take photos of Yves, and give her the gift of an apple to show her love, but with no luck. Additionally, Chuu also is shown watching Yves' solo song "New", and attempts to copy Yves' dance choreography.

Still with no luck at gaining Yves' acknowledge, Chuu decides to eat the apple and therefore reject God and the garden of Eden. Immediately after, it appears that Yves has accepted Chuu's love. They are shown giving each other presents and celebrating Christmas. Yves feeds Chuu strawberries and both are shown to be having fun.

The next music video appearance of Yves and Chuu is in the song "Love4eva". This song is by the sub-unit yyxy, and so comprises of members Yves, Chuu, Go Won and Olivia Hye. All four girls live within the Garden of Eden and are being tutored by a female headmistress. After the headmistress finds a dirty sock, Yves is reprimanded and Chuu watches them from afar. Eventually, Yves decides to disobey the headmistress and leave. Yves manages to convince Chuu to follow her and likewise reject the Garden of Eden. Both girls then attempt to also convince Go Won to leave, but they however ignore Olivia Hye.

In the yyxy teaser video "one", both Yves and Chuu are shown picking up apples. Yves represents faith within the teaser, whereas Chuu represents love. The symbolism of Chuu as love is likely a reference to her love and adoration for Yves as shown in the "Heart Attack" video.

In the debut song "Hi High", all twelve LOONA members including Yves and Chuu finally meet together in the real world.

The next appearance of Yves and Chuu is in the short video teaser "XIVX". At night, Yves travels to a street in Hong Kong and exits her cab. She begins dancing to a backing track of dark electro music. The video cuts to Chuu who is also in Hong Kong and is searching for Yves. Chuu finds her and dramatically jumps in front of Yves. They begin a short dance duet, before ending in the symbol of a butterfly (and an 'X'), hinting at LOONA's next comeback. Along with the rest of the group, both Chuu and Yves appear in the music video "Butterfly".

Chuu and Yves have been shown to be close, often seen close together on their way to schedules, or hugging each other on episodes of LOONA TV.

Chuuves quickly became very popular due to the romantic nature of the Heart Attack video and their own relationship. They also have the most fanfiction on AO3 out of the LOONA ships, with currently 147 published works.

Chuu and Yves' relationship within the "Heart Attack" music video has been widely praised for being a positive representation of LGBT by fans and critics, especially in a genre with little LGBT rep. However, LOONA has also been criticised by some fans who view the video as an example of queerbaiting.

In February 2019, a tweet about Chuuves went viral. The tweet was captioned with a fake news title about Chuu and Yves marrying and becoming the richest couple in the world. Despite being fake, many people took the tweet as real, and the tweet later went viral, with a Buzzfeed article about the incident. The tweet was a reference to the original WJSN lesbian tweet, that went viral prior in 2017.[3]

“[BREAKING] Lesbian Korean Billionaires, Ha Soo Young and Kim Ji Woo, marry. With a combined net worth of $170 BILLION, this makes them the richest couple alive.”
— The tweet by chaoticbyoec[4]

“The new single lets the fans take a peek into what JiWoo, who has already been a popular trainee among fans, had to go through to become ‘Chuu’, and her desire to be loved by Yves, who also has said in her lyrics, “my heart that wants to be like you gets colored, filled with you.”
— Heart Attack official description[5]

“Yves, the leader of yyxy, had “faith” in being born again with the song ‘new’. Chuu keeps her “hopes" up with her yearning towards Yves.”
— Butterfly official description[6]

Yves has shown her support and appreciation for LGBT and Chuuves several times, most notably in the MTV interview. She admits that "Heart Attack" was not intentionally LGBT-themed, but that LOONA does embrace and welcome that interpretation.

“I think I should answer this, ... I heard the LGBTQ+ community was really interested in the continued worlds of 'New' and Chuu’s solo, 'Heart Attack,' [..] When the song was being written and the video filmed, we didn’t see it like that. For us, it was a story about yearning, but we were also thankful when it was translated that way. You may have realized it during 'Butterfly', but we want to go beyond gender, race, and nationality”
— Yves on Chuuves and their LGBTQ+ fanbase[7]

“I told Yves that as a queer fan, I was very thankful for her willingness to talk about their LGBTQ+ fans in their MTV, and that it's uncommon for Kpop groups to do that so I felt like I'd been acknowledged by someone I really care for. She said that all of Loona is of the same opinion -- that they're very grateful to their LGBTQ+ fans and that they don't see any reason why they shouldn't talk about it, because we're all people who deserve respect and acknowledgement.”
— @satelliteandsky[8]

ChuuVes on the LOONA Wiki 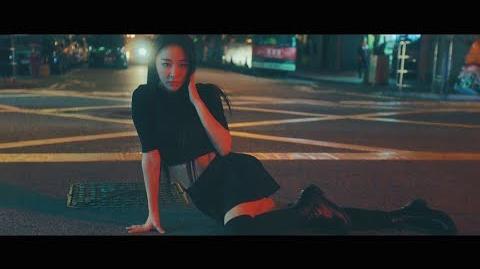 Retrieved from "https://shipping.fandom.com/wiki/Chuuves?oldid=160835"
Community content is available under CC-BY-SA unless otherwise noted.