Class 74th Trio is the polyship between Juzo Sakakura, Kyosuke Munakata and Chisa Yukizome from the Danganronpa fandom.

All three attended the same class, Class 74th, during their school years at Hope's Peak Academy. During that time, the trio hanged out together as friends. Eventually, Chisa and Kyosuke started dating. They both stayed best friends with Juzo. The three of them have been shown to be extremely close and very loyal to one another.

After graduating from Hope's Peak, the trio remained affiliated with the academy, with Kyosuke working on expanding it overseas, Chisa becoming Class 77-B's homeroom teacher, and Juzo becoming the head of security. They had planned to work together like this since their high school days. Since Kyosuke was busy working overseas, he had Chisa and Juzo secretly work on learning the dark secrets of Hope's Peak Academy. Both Chisa and Juzo were willing to work hard for Kyosuke.

Some time before The Tragedy started, both Chisa and Juzo claimed to Kyosuke that Junko Enoshima was innocent despite a lot of evidence pointing to her being behind Hope's Peak's tragedies. Chisa lied for Junko as a hidden Ultimate Despair member, and Juzo as a result of Junko blackmailing him. Juzo felt incredibly guilty doing so, but he felt he had to hide his sexuality. Kyosuke believed his friends, going against his better judgement. This is only one instance where he displayed trust in the two of them.

After The Tragedy started, the trio became members of the Future Foundation. All three of them became leaders of their respective divisions. Their roles as the Future Foundation's leaders eventually got them to participate in the Final Killing Game. Unfortunately, Kyosuke was the only one out of the three to survive the game. Kyosuke was significantly impacted by his friends' deaths.

Chisa's death early in the game greatly affected Kyosuke. Kyosuke was fueled by a pure desire to avenge her death and eradicate despair. For the majority of the game, Juzo and Kyosuke have been working together. However, Kyosuke betrayed Juzo at one point after Tengan's words of everyone being a potential attacker made him believe Juzo was an Ultimate Despair, also believing this was the reason why Juzo had lied about Junko's innocence to him years ago. Despite this betrayal, Juzo ended the game in order to let Kyosuke survive. Kyosuke was eventually convinced by Makoto Naegi that Juzo wasn't an Ultimate Despair, but he was too late to be able to apologize to him, with Juzo already being dead.

This polyship is a result of Chisa Yukizome and Kyosuke Munakata's canon relationship, Juzo Sakakura's canon attraction to Kyosuke and friendship between Chisa and Juzo; with some fans not being able to choose between the two or liking the dynamics between the entire trio. The idea of Juzo being left alone while Chisa and Munakata stay together, oblivious of his feelings, is a rather depressing thought. Many envision Kyosuke dating both Chisa and Juzo; while the relationship between the two themselves stay friendly. Their high school friendship did add to the ship's overall popularity, as many young friendships tend to do. Some artists have drawn them in a "happy ending" kind of way, depicting their threesome as wholesome and heartwarming. 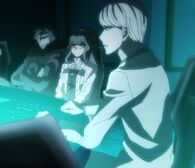 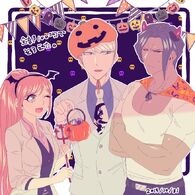 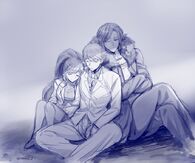