Class 76th Trio is the polyship between Ruruka Ando, Seiko Kimura and Sonosuke Izayoi from the Danganronpa fandom.

The trio has known each other since childhood. Ruruka and Sonosuke met Seiko when she failed to save one dog but also managed to save the other one with her medicine after two dogs were hit by a motorbike. Ruruka was impressed by Seiko's skills and the two became friends since, with Ruruka calling her "Seiko-chan," which in Japanese culture implies a close friendship. Ruruka and Sonosuke must have already known each other prior, although it's unknown whether they were already dating at that point.

For years, being impressed with Seiko's helpfulness, Ruruka would ask her to do a lot of things for her. Feeling the need to make up for the fact that she can't eat Ruruka's sweets, Seiko would go along with any request of her best friend. Once Kimura completed her task for Ando, the latter would usually leave her for her boyfriend.

The turning point in their toxic friendship comes with the practical exams during their second year at Hope's Peak Academy. Ruruka asks Seiko for a performance-enhancing drug in order to make sure that she passes. Although Seiko is reluctant at first, knowing that cheating on the exams testing their talents isn't allowed, she allows Ruruka to get what she wants after the latter reminds her that they're best friends and she can always rely on her. However, due to Nagito Komaeda's luck, he had ended up taking the drug that Ruruka wanted and she ended up taking the drug meant for him. To make things worse, on her way to the gym where the exams take place, Seiko bumps into Nagito and they accidentally take each other's bags. It's important to note that Nagito had placed bombs in the area and had sent annonymous threats to postpone the exams (so that his classmates would have more time to grief Natsumi Kuzuryu and Sato's deaths).

As such, during the exams, once the jury tastes Ruruka's sweets, the fast-acting laxatives meant for Nagito reveal her cheating attempt. Ruruka assumes that Seiko had betrayed her, and her boyfriend even pulls out his knife upon seeing this. Seiko tries to explain herself, but once she opens her bag, she only ends up looking like the culprit more. Finally, a giant dog enters the gym and makes Ruruka and Seiko accidentally press the button setting off the bomb.

The three end up being blamed for the bombing incident and expelled from Hope's Peak Academy. Ruruka and Sonosuke would go on believing that Seiko betrayed them and vice verse, with neither side being aware of the involvement of Nagito's luck. Out of the three of them, only Seiko Kimura was offered help from the Class 74th's trio - Chisa Yukizome, Juzo Sakakura, and Kyosuke Munakata.

After the Tagedy, all three of them would go on to become the leaders of their respective divisions in the Future Foundation. This would get them involved in the Final Killing Game. When Monokuma mentioned that there is a traitor who would be the only person not to be injected with sleeping drugs every sleeping period, Ruruka and Sonosuke immediately distrusted Seiko and vice versa. When Kyosuke suggested voting for who everyone thinks the traitor is and killing the person with the most votes, Ruruka and Sonosuke voted for Seiko and Seiko voted for them. However, due to the way they were positioned, Kyosuke assumed they voted for Makoto Naegi, along with Juzo Sakakura.

When the group split up, the trio becomes focused on their conflict. At one point, Seiko finds the couple and eats drugs that increase her strength drastically, and begins to chase after them. Sonosuka runs away, carrying Ruruka. After some time of running away from her, Sonosuke faces Seiko in a battle. Ruruka sends him to find a weapon to kill her, which sets him on a path to find a hidden exit. She then offers to leave Seiko alone if the latter killed Kyosuke Munakata. However, due to him showing her kindness and helping her after her expulsion, Seiko refuses. Ruruka soon figures out her ex-best friend's forbidden action of not letting anyone step on her shadow, but it's turned pointless once Kimura breaks every light in the room. She then begins to chase Ruruka, but the two are separated after Seiko gets caught in Juzo Sakakura and Miaya Gekkogahara's battle. Seiko dies during the next sleeping period, committing suicide after watching a brainwashing video.

Sonosuke soon dies as well, as due to having found the exit and Ruruka's forbidden action preventing her from letting anyone escape the game's area, Ando's trust issues kick in. She feeds him with her candy during their kiss, breaking his forbidden action of putting food in his mouth/eating. In order to cover her crime, she applies make-up on his face to hide the purple color of his skin and the blood coming from his eye. She also takes the knife from Seiko's corpse and stabs Izayoi's body with it, to make it look as if the attacker murdered him.

Once her crime is found out by Kyoko Kirigiri, Ruruka is left alone, with no one trusting her anymore. Juzo even attempts to escape when he believes the exit is legitimate, even though by this point he already knew about her forbidden action. Ruruka would remain alone with her self-hatred until her death as the next victim of the brainwashing video.

In Super Danganronpa 2.5: Nagito Komaeda vs. The World Destroyer, the trio is shown to be friends in Nagito Komaeda's illusionary world. This may be because the action takes place during their time at Hope's Peak Academy or because Nagito saw them as being friends and was unaware of their falling out.

The three are the only known students from Class 76, which made them dubbed as "Class 76th Trio" by many fans. With them being their only known classmates, having important interactions with each other, and rarely interacting with anyone else in the story, the ship sailed naturally.

One of the reasons of the ship's unpopularity is the way Ruruka treated her best friend, Seiko, and the implication that the only reason why she and Sonosuke were a couple for so many years is because she kept drugging him with her sweets that are so good that they're basically mind-controlling. As such, some fans prefer to ship the victims of Ruruka's relationships, Seiko and Sonosuke, together, excluding the Ultimate Confectioner.

However, there are also fans who enjoy the tragic story of the trio and believe they could have remained as friends under different circumstances. This does not speak to the fans who view Ruruka and Seiko's friendship as toxic, though.

Regardless of whether one liked their plot or not, fans often criticize the fact that all three of them died, claiming it makes their arc feel pointless and a clear filler to the main characters' story. The fans often wish that at least one member of the trio had survived the killing game, with it usually being Seiko for being one of the nicest characters in the series, or Ruruka for getting a redemption arc and finding out the truth behind the fallout of her and Seiko's friendship.

As a result of having important interactions with each other, the trio is often shown together on official art. 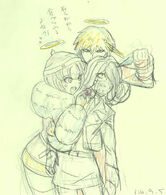 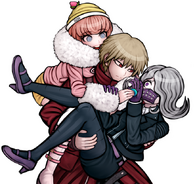