Clawthorne Sisters is the family ship between Eda Clawthorne and Lilith Clawthorne from The Owl House fandom.

Back when Eda and Lilith were children they were the best of friends. When little Eda falls and hurts her knee, Lilith eases the pain by placing half of it in her through a spell that allows injures and even curses to be shared. The sisters continue to be friends as they grow up from children to teenagers. Like most young witches Lilith wishes to join the Emperor's Coven and Eda helps her older sister to train for it so they can join the coven together. Lilith respects that, but despite Eda's younger age her magic is far more powerful than Lilith's and that worries her.

Eda and Lilith study on the way to school and end up running late. Eda distracts Principal Faust and leads Lilith to a passageway to the Secret Room of Shortcuts. Eda is about to come with Lilith, but Eda slams the door on Lilith's face and hides the passageway. Eda is caught by Principal Faust and taken to his office. After Principal Faust brings up the topic of expelling Eda, Eda immediately worries about being separated from Lilith. Eda says that she'll do anything to not be expelled.

On the day that the two finally got round to signing up for their dream, however, they learn that the Emperor's Coven only had one spot left and the sisters were told to duel each other for it. Under the belief of the Emperor's statement about sacrifices and her desire to be his coven clouding her judgment, Lilith journeys into the Night Market in hopes that she'll be able to find a spell that will give her an edge in the duel. She finds an owl seal curse that takes magic away she decides to use it. Being under the impression that the affects will be temporary, she casts it upon a sleeping Eda. On the day of the duel, as Lilith prepares to make the first move, Eda forfeits the duel while stating that she won't fight her own sister. Eda then asks Lilith to not forget her once she becomes a big shot in her dream coven, but as she begins to walk away the curse Lilith placed on her younger sister transforms Eda into an owl-like beast that everyone starts to throw stones at. Lilith tries to defend Eda, but her sister has already dashed off and the older Clawthorne sister gets excepted into the Emperor's Coven like she wanted.

Since then, the sisters' bond is broken as Eda becomes a covenless rebel witch who breaks a few rules for the joy of it or to simply help her to get by as she opens up a human item stolen without a permit. Eda has also been having dreams about the person who cursed her, but the wavy, disformed shape of the mysterious shadow figure kept her from realizing that it is Lilith from when they were teenagers. As for Lilith, she upholds the Emperor's ruling laws as she becomes one of the coven's most respected members and hates Eda's child-like behavior. Despite this and the coven wanting to arrest Eda for her long list of crimes, Lilith still cares about her sister and the Emperor's promise of curing Eda of the curse has Lilith trying to capture her. At first Lilith tries to get Eda to join the Emperor's Coven wiling through their shared childhood dream and goes against the Emperor's orders to give Eda that chance so they can be together again, but Eda had developed a strong dislike for covens from their one kind of magic only rule and she takes pride of using all types of magic. Eda's troublemaking has Lilith believing that her sister is the type of person who cheats to win, and despite being right on the fact, Lilith commits her own cheating to counteract Eda's. Even though Eda has grown to hate Lilith and her coven, a part of her still cares about her older sister as she gives Lilith her ring and tells her to inform the Emperor that she put up a fight to help Lilith save face with her leader, teams up with Lilith to fight a con artist after she saves her sister from a spider-crab monster and when Eda came close to losing a witches duel she lies about wanting to see Lilith again while stating that the curse is getting worse in order to get Lilith to lower her guard so Eda can win before making her getaway.

By the events of "Agony of a Witch", however, Lilith is pressured to speed up her capture of Eda when the Emperor threats to kick Lilith out long with reminding her what happens to coven-less witches. Out of fear Lilith tries to get the job done after she failed to attack the Owl House and decides to find away to bring Eda to them. Because the negativity between the sisters, Lilith is unaware that Eda cares about King, Owlbert and Hooty as must as she grows very fond of Luz the human. Once Lilith found Luz trying to steal a magical healing artifact and destroys it, despite Luz's clam of her needing it to help heal Eda from her curse, Lilith's blind loyalty has her believing that only the Emperor's magic can save her sister and captures Luz to bring Eda to them. The sisters duel each other once again as Eda tries to save Luz from Lilith. During the duel as the sisters begin to fight about which one of them is better than the other, it provokes Lilith to accidently slip out the truth when she yelled "Then why were you so easy to curse?" and it allows Eda to finally identify the figure from her recurring dream. Despite Lilith stating that she now has the power to remove the curse, Eda's anger causes her to attack Lilith out of rage while pushing her magic limit. Lilith sees this and decides to use it to her advantage since Eda is unable to use magic in her curse form and will be easier to capture. Once Eda was in their grasps Lilith takes her sister's staff and palisman Owlbert before sending Eda's human ward away.

Once the Emperor reveals that he has no intention in curing Eda and only wants the human world portal from her, the older Clawthorne sister realizes that she has made another terrible mistake that has endangered Eda once again. After she is ordered to destroy the Owl Staff while the coven prepares to petrify Eda in her curse state, Lilith seeks the help of Luz and King in order to save Eda, but she and King ends up getting themselves captured before being placed in Eda's cage so they'll be petrified with her. Shortly after, Lilith greets Eda despite the situation they are in. Eda is angry for what her sister has done to both her and Luz and gets Eda to attack Lilith before they get turned to stone, but King managed to stop Eda from doing so once he explains that Lilith has betrayed the Emperor in order to save her. This surprises Eda as Lilith tries to tell Eda that she never knew the Emperor's true plans. When the petrifaction begins, Eda uses her own body to shield both Lilith and King from the blast. By the time Luz comes to their aid, Eda is only partly petrified and is able to be cured of it, before she spirits all of them away to the safety of the Owl House. Knowing that Eda's elixir won't be able to save her this time, Lilith decides to do something that she should have done a long time ago to make amends. Casting the shared pain spell so half of the curse can be placed in her, while Eda gets turned back to normal. Even though the curse has weakened both of their magic, gives them a grey strand of hair, and makes one of their eyes change color, Luz's self-discovered way of magic gives Eda hope as Luz promises to teach it to her. As for Lilith, she is glad to know that Eda is safe and happy again.

Because Lilith can't go back to the Emperor's Coven, she moves into the Owl House where Luz teaches both magic weakened sisters how to use Glyphs. Lilith also becomes a family of the make shift Owl House family.

Clawthorne Sisters is seen as the main canon family ship in The Owl House fandom, next to the Blight Siblings and the semi-canon Owl House Family, as fans fell in love with their sister bond. After Lilith cast the spell that places half of Eda's curse within her, fans believe that season two would have Lilith moving into the Owl House. Fans had also hoped that the second season would have had more Clawthorne sisters moments as they patch things up, but Lilith's new friendship with Hooty has her spending more time with him than with Eda in the first half. Even though some were glad of the way Eda tries to help Lilith deal of the curse and allowing Lilith's help to master glyph magic, before the older sister left to live with their mother. They were sad when Lilith went away and hoped that she'll return to Eda's side in the near future. Like she had done in "Edge of the World," as well as her becoming a fun aunt to Eda's human ward.

Sometimes in role swap AUs, Eda is the Head Coven leader of the Emperor's Coven while Lilith is the rebellious cursed witch. 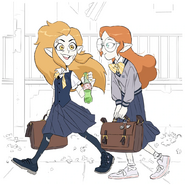