“The people who saved me, Leon and Claire, are the closets friends I’ve ever had. They risked their lives for me back in Raccoon City. I guess I'm still just trying to live up to their example.”
— Sherry to Jake Muller, about Leon and Claire, Resident Evil 6.

Clerry is the friendship between Leon Kennedy, Claire Redfield and Sherry Birkin from the Resident Evil fandom.

In 1998, Leon and Claire have a chance meeting at a gas station, where they end up working together to fight off the undead invading the station. Leon takes notice of a police car parked out front and the two run for the vehicle, speeding off. They arrive to Raccoon City where they’re forced apart following a semi-truck crash and explosion. The two make for the police station where Leon is supposed to be working his first day, and Claire is in search of her older brother, Chris Redfield, a cop as well.

Leon and Claire meet up briefly with a chain-link fence between them. Claire jokes, “Leon! We really gotta stop meeting like this.” She then tells him it’s “good to see your face.” They end up being forced apart again with an incoming attack following a crashed helicopter exploding, altering zombies to their location, Claire begging Leon to go as she sees zombies harshly pushing against the fence surrounding the station. Leon leaves, not before telling Claire, “We’re gonna make it. Both of us.”

Back inside, Claire, still in search for her brother, makes for the underground facility beneath the police station. It’s there she finds a small child, Sherry, hiding in the dark. Claire gently tells her, “Hey, it’s okay. I won’t hurt you, I promise.” She also asks if she needs help, before extending her hand out. Sherry just barely whispers that it’s Claire who needs help. Claire asks again and Sherry tells her louder, before pointing to, unbeknownst to Claire, Sherry’s father, William Birkin, in his mutation form. A fight ensues with William falling over a ledge, seemingly dying.

Claire calls out to Sherry, telling her it’s “over”. Sherry emerges from over the platform where Claire had fallen in and Claire asks her to lower the ladder for her. Before Sherry does, she asks Claire if she can help her find her mother. Claire agrees and Sherry smiles before lowering the ladder. Up top, the two talk about Sherry’s parents and how Claire also lost hers, which Claire comments that’s a good thing – they have something common.

Leon and Claire don’t see each other for a long while that night, until the underground Umbrella facility they’re in is in self-destruct, following the G-Virus getting out. As Claire is attempting to get a train moving, Leon appears on a video feed telling Claire she needs to get out of there. Claire tells him that she thinks all of them: him, her and Sherry can make it and asks where he is. Their video feed keeps breaking up and Leon insists that Claire not worry about him, just for her to get out of there. Claire makes more desperate attempts to reach Leon, though to no avail.

Claire and Sherry are on the train and heading for the exit. As the train is descending, another attaches to it. With the train in full motion, the carriage door slides open to reveal Leon running though. Leon exclaims Claire’s name, and in return so does Claire with Leon’s name, with a wide smile, also telling him, “It’s so good to see you!” Leon tells her, “I told you we’d make it, didn’t I?” Claire’s voice softens and replies, “You did.”

Leon sees Sherry and asks who the child is, with Claire telling him her name is Sherry. The back train car is attacked by the level 4 mutated William Birkin, have mutated again. Leon goes to handle it, telling Claire to stay back to protect Sherry. As Leon is fighting William, Claire tells him they need to break off from the train car; as Claire does she grabs Leon’s hand, leaving William to burn in a massive explosion.

By morning, they’re walking away from the city when Sherry asks if Leon and Claire are “like boyfriend and girlfriend,” to which Leon tells her no, that him and Claire had actually just met that night. Claire teases, “Yeah… that would’ve been one helluva first date, though.” Sherry points out a semi-truck coming their way, and think they might be able to give them a ride. Leon tells Claire to get Sherry out of there while he waits for the truck to come closer. The man in the truck flips Leon off as he drives past. With the potential danger out of the way, Claire and Sherry come back to Leon’s side. Leon reaches for Sherry’s left hand and Claire reaches for Sherry’s right; the three of them walk hand-in-hand, continuing down the road when Sherry happily proclaims Leon and Claire “can adopt her” and that they can get a puppy and a parrot.

The majority of Leon/Claire/Sherry interaction takes place during Resident Evil 2, when Leon is 21, Claire is 19 and Sherry is 12. This lead to most of the fandom seeing the three of them as a family; Leon and Claire as the parents, and Sherry as their daughter, despite just the nine and seven year age gap. This is even more cemented when Sherry cheerfully proclaims that Leon and Claire “can adopt her” in the Resident Evil 2 2019 remake.

In the later years of the series, the next time Sherry is seen she’s a grown 26 year old woman. Following her canon physical and mental growth, she along with Leon and Claire have been shipped romantically by a very small handful of people. 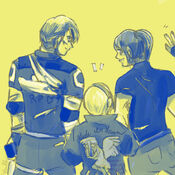 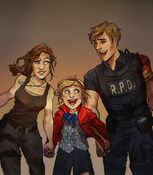 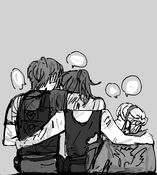 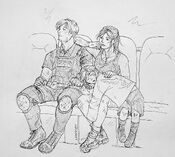