Broken Up/Best Friends (comics)
Best Friends/Teammates; Natasha sacrificed herself to save him (MCU)

Is this love, Agent Romanoff?
—Loki, observing their relationship[1]

Clintasha is the het ship between Clint Barton and Natasha Romanoff from the Marvel Cinematic Universe and Marvel comics fandoms.

Their first appearance is in the episode 2x09 "The Hawk and the Spider", they worked together as mercenaries. Episodes later Fury recruit Natasha as a S.H.I.E.L.D. agent and Clint worked as some kind of vigilant.

In the episodes where they appears they're constantly flitring and show concern for the other.

They debut in the third episode "Hulk vs the World". They work toguether as agants of S.H.I.E.L.D. until Natasha betrays Clint, since here Clint spends his time chasing her. Later, in the episode "Widow's Sting" she saves him, wich makes Clint doubt about her betrayal then in the episode "Hail, Hydra!" Natasha told the Avengers that Fury send her to infiltrate Hydra; in the end of the episode they kiss each other and then Natasha goes to search Fury and Clint returns with the Avengers.

In the comics based on this serie, they go to a date after defeat some Hydra agents.

They appears since the first episode. While they don't have a real prove that they're dating like a kiss there's a high possibility that they are.

During the whole show it's common to see them together, almost isolated from the other members of the team. They know each other better than anyone, also trust and have full faith in each other. Sometimes they flirt but it's mostly jokes or part of the missions. In some episodes Natasha looks a little jealous when Clint talks with other women.

The moments in which it is most notable that they're more than just friends is when one of them put the other as priority like in "Crime and Circus" where Clint only saves Natasha when the whole team was in risk or in "Back to the Learning Hall" where Natasha runs to help Clint when Loki attacks him. And of course the multiples times when they save each other. As partners they have a lot of combo attacks.

Before Natasha worked for S.H.I.E.L.D., she gained a reputation as one of the world's greatest assassins. Recognizing her as a threat, Nick Fury sent Clint to kill her. Instead, seeing her skill, he recommended that she be considered for S.H.I.E.L.D. recruitment. She then defected from Russia and joined S.H.I.E.L.D., starting a lifelong friendship with Clint. The two were partnered together for countless missions. She was one of the very few people who knew about his family.

Natasha is on a mission to gather intel about General Georgi Luchkov when she receives a call from Agent Phil Coulson, who asks her to come in. She initially refuses, saying that she's "in the middle of an interrogation." When Coulson mentions that Clint's been compromised, Natasha immediately changes her mind. She displays concern for him while he's under Loki's control, even asking Loki himself what he plans to do to him.

Natasha fights against a mind-controlled Clint when he infiltrates the helicarrier. The two are evenly matched until Natasha resorts to guerilla tactics and slams his head against a metal bar, disorienting him. She then punches him in the face and knocks him out. When Clint wakes up, he's free from Loki's control; Natasha hit him hard enough to free him. She stays by his side while he recovers and comforts him in his guilt of what he did while brainwashed. They fight alongside each other during the Battle of New York and drive off together afterwards.

When Clint is injured in battle, Natasha rushes to his side to dress his wounds.

After the battle at the salvage yard in Africa, Clint finds Natasha still dazed from the nightmare vision Wanda inflicted upon her, and helps her to the Quinjet. After flying the team to his farmhouse, he helps Natasha walk inside. His kids run up to her and greet her as Auntie Nat.

Later, during the Battle of Seoul, when Natasha is captured by Ultron, Clint refuses to leave without her, needing to be ordered by Steve to leave. He becomes worried while she's missing and resorts to old-school spy techniques to find her. They fight alongside each other during the Battle of Sokovia, and Clint mentions to her his plans to work on his house.

Though he was retired at the time of the Sokovia Accords, Clint joins Steve Rogers's team of rebel Avengers. He and Natasha subsequently fight each other at the Leipzig-Halle Airport. The two pull their punches as they fight, according to Wanda Maximoff, as they don't want the fight to get in the way of their friendship.

Clint doesn't appear in Infinity War, but he is mentioned. When the team reunites, Bruce Banner enquires after his whereabouts. It is Natasha who responds, telling him that Clint, and also Scott Lang, took house arrest deals after the situation with the Sokovia Accords.

Clint is with his family when the snap happens. Five years later, Clint is hunting and executing every bad guy he comes across as a non-stop killing machine. Natasha is heartbroken that she couldn't reach him in his grief and keeps tabs on him, despite Rhodey trying to dissuade her to save her the heartache. In the status report where Rhodey tells Natasha this, she insists she's fine and they hang up, upon which Nat breaks down in tears. Steve drops in and also tries to convince Nat to move on, albeit admitting he has a hard time with that himself. Most of Nat's pain of the snap seems to stem from the feeling of losing Barton to his grief, so when Scott appears and presents a solution, Nat is adamant that it work and almost devastated when Tony is unwilling to help.

Steve, Scott and Nat seek out Bruce to help them, but they experience mixed results. Meanwhile, Tony has worked out the mechanics and feels that he has to try to bring everyone back. They bring in reinforcements, including Thor. Nat goes to Tokyo to find Clint and catches up with him as he executes a Japanese mobster. He senses her presence and says, without turning around, that she shouldn't be there. She tells him they have a possible solution and Clint is almost destroyed by the notion of it, agreeing to come with her to Avengers Headquarters. Scott feels unprepared to do the test-jump through time and Barton volunteers, which, despite his murder crusade, nobody objects to. He makes the jump successfully and returns confused, lying on the floor heaving. Nat runs to him and slides onto the floor to his side, telling him that he's back with them, that he's alright. Clint tells her and everyone that it worked.

When Clint and Natasha arrive at Vormir for the soul stone, they fight over who should sacrifice themself. When Clint jumps off the cliff, Natasha jumps off after him. Clint tries to get her back on the cliff but fails. Natasha tells him to let her go and that it's okay. She propels herself off the cliff and Clint ultimately retrieves the Soul Stone.

In a flashback scene of Natasha planning to kill Dreykov in Budapest as her final step in defection to SHIELD, Clint speaks to her through the radio and asks if the bombs they rigged are clear to explode. Natasha also mentions that they had to fight the Hungarian Special Forces and hide in the city for ten days before escaping. Two of these days were spent in the vents of a metro station, and the walls of these vents are covered with games they played, including Tic Tac Toe and Hangman.

Before they were heroes, Natasha and Clint met and fought against Tony Stark and Peter Parker. When Natasha was injured during one of their fights, Clint retreated and took her to safety. While she recovered, she began to fall in love with Clint, which weakened her loyalty to Russia. When her employers learned the truth, they had her gunned down and sent to the hospital, which convinced Clint to abandon his criminal ties and join the Avengers.

They continued their relationship when she joined the team as well, though it became strained as Clint was usually too busy with the Avengers to pay attention to her. They ultimately decided to end the relationship, though Clint still loved her.

In Secret Empires (2017) they are in a relationship again until Natasha dies. Time later he searchs her with the help of the Winter Soldier, when they found her Natasha leaves him with a letter where she calls him "Dearest Clint" and sign with "XOXO" as opposed with the letter she gives Bucky where she don't has that kind of details. Then, in Black Widow (2020) Natasha don't choose any of them, and they stay as friends.

“Agent Barton was sent to kill me. He made a different call.”
— Natasha, to Loki[1]

Natasha – “This is just like Budapest all over again!”
Clint – “You and I remember Budapest very differently.[1]”

“Are you sure he's gonna be okay? Pretending to need this guy really brings the team together.”
— Natasha, teasing Clint [3]

Clint – “Natasha, you know what I've done. You know what I've become.”
Natasha – “Well, I don't judge people on their worst mistakes.”
Clint – “Maybe you should.”
— Their last exchange on Vormir[4]

Many shippers claim the way that Clint talks to her and the way Natasha immediately helps once she's heard that Clint has been "compromised" are signals of their love. Loki, the villain, also appears to notice their relationship, saying, "Is this love, Agent Romanoff?"

Many shippers say that Natasha is in denial. Shippers have also noticed that Natasha is wearing an arrow necklace in Captain America: The Winter Soldier. The necklace made a reappearance in Avengers: Endgame and can also be seen in the trailers for the upcoming Black Widow movie.

Those that shipped the two were disappointed when Avengers: Age of Ultron revealed Clint was married and had a family. Nonetheless, the ship remains highly popular in the fandom.

Because of Natasha's red hair and Clint's archery skills, a few fans have had them as the parents of Merida from Brave. Just as there have been those who have had Loki as the father of Elsa from Frozen and Jack Frost from Rise of the Guardians, through their ice powers. 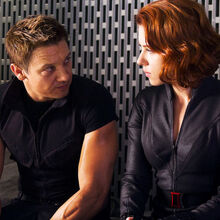 WinterWidowHawk refers to the ship between Bucky Barnes, Natasha and Clint