Never met (outside of Dissidia and other official FF crossovers)

CloLight is the het ship between Lightning Farron and Cloud Strife from the Final Fantasy fandom.

As Lightning and Cloud are from different Final Fantasy series, they have never met in canon. Since Lightning is from Final Fantasy XIII, while Cloud's is Final Fantasy VII. Both of their Final Fantasy games are two of the well liked FF sages/trilogies, from how their stories continued after their first games. Lightning's FF series is made out of three games, while Cloud's has a few sequels and prequels where some of them are featured in an film and two short animes than just a few other games.

Both Lightning and Cloud are soldiers who were loyal to the garment they served under, until certain events that has a member of their family getting hurt by people that they once viewed as allies, because of the title and rank they held. In which began their paths of becoming rebel soldiers, as they rise up against those they formerly served under and would have fought along side with, instead of against as they hunt them down. Cloud's home Final Fantasy world relays on the Lifestream for power and fuel, while Lightning's depends on the Fal'Cie for food and such, and their times traveling with their parties have gotten them to learn a bit more about their worlds and how they can change it for the better together; so they could save them from a grim fate. Where one of those world ending disasters would have been brought upon from a large, heavy object falling from the sky, if Cloud, Lightning and their parties haven't set events that stopped the impact from happening. In order for them to summon a summon monster in their Final Fantasy worlds, both Cloud and Lightning require a type of crystal to do so. Cloud's is a red colored Materia, while Lightning can summon her Odin Eidolon from her rose shaped Eidolith, each member of her party has their own Eidolith, as well as their own Eidolon. The Materia is also what allows Cloud to do magic from a green one, Lightning on the other hand couldn't do magic until she was branded an L'Cie and even after the mask was lifted from her, the tasks that Lightning was given by the gods allows her to continue using magic for her divine entrusted tasks.

Their other common link is that both of them have been surrounded by a powerful, colored wave that contains souls of the dead. The Lifestream and the Chaos, and their dead friends and loved ones that talked to them through it. In Cloud's FF world the Lifestream is its primary energy source when it is used to make Mako, Cloud had suffered from Mako poisoning when he had fallen into the Lifestream for an extended period of time, in which caused his identity and personality to be phased through by the millions of souls and their memories coursing through the green colored stream, making it one of the reasons why he saw Zack's memories as his own, Tifa helps him to him realize that the illusion he based off of his friend had caused him to live a fuels persona, when their minds were in the stream. While the Chaos had pulled Lightning into Valhalla so the Goddess Etro could make the Guardian Corp her knight, and sometime after Lightning later became the Savior as she works to save souls in Nova Chrysalia, she comes across ways of Chaos and had collected Soul Seeds from within from when she isn't battling monsters that appear in it, Lightning has even learned a few things about the Chaos itself and people that are connected to it. Living or Dead. Cloud's home world has its own version of chaos, that a member of his party, Vincent Valentine, can use after it was used to save his life.

CloLight is one of the most well liked Final Fantasy crossover ships, as both Cloud and Lightning are rebel soldiers who have stood up to the people that they were trained to serve under, so they could make their own choices that allowed them to save their home FF worlds.

Some fans are hoping that Lightning will get added to the Kingdom Hearts series, like Cloud has. Which is why a few fans use her Dissidia model to create MMD fanart of the Kingdom Hearts fanon universe, with a few extra Final Fantasy characters. 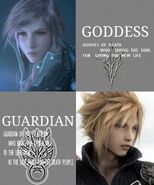 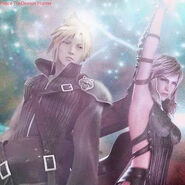