Clois is the het ship between Clark Kent and Lois Lane from the DC Comics, Smallville, DC Extended Universe, and Supergirl fandoms.

In "Savior", Lois returns to the present after have been missing for three weeks with no memory of her time in the future. The Kandorian assassin who came back with her causes the monorail that appeared on to decouple but it is saved by Clark. Clark returns to the fortress to continue the training he has been reviving since Jimmy's death but Jor-El notes that his mind seems conflicted and distracted. Lois, still unaware she has been missing for three weeks, sneaks out of the hospital she was sent to, despite Chloe's insistence to stay put, to make it to the phone booth to receive the Blur's phone call and when he doesn't make contact she is on the verge of tears begging for a sign. At the fortress, Jor-El notes that Clark hasn't let go of all his human attachments, so Clark return to Metropolis with plans to say good bye to Lois. Meanwhile Lois, having learned how long she was miss from reporter John Corben, searches for Oliver to find out what happened. Chloe meets up with Clark on the roof of the Daily Planet, noting that now that Lois is back, Clark actions are more predictable. Lois finds Oliver in an underground fight match, but then the Kandorian assassin shows up to attack them. Clark steps in and when the assassin says she was only attacking Lois to draw Clark out, Clark draws her to the farm to stop her away from everyone, which he does. Lois admonishes Oliver for not acting like the hero she knows he is, but when Oliver protests that he is not, Lois declares it a good she already found her hero. Lois goes back to the Daily Planet and is disappointed to see John Corben at Clark's desk. Corben says that Clark has been visiting relatives indefinitely, but Lois tells him not to get too comfortable because she believes Clark will be back and she fishes Clark's name plate out of the trash can. Clark later calls Lois as the Blur and tells he can't stay away from and to keep their communications a secret.

In "Metallo" Lois goes to the farm to look for Clark, but she only finds his dog Shelby. However, she sees Shelby's dog dish full and realizes that Clark has probably been stopping by to feed Shelby (which she is correct about). She then gets a call from John Corbin and rebuffs both his attempts to hit on her and his claims that The Blur is nothing but an irresponsible vigilante. Lois wakes up the next morning with Shelby (whom she brought home with her), after having more flashes of (among other things) the night she slept with Clark in the future. After Lois says she grateful to have news of The Blur to wake up to, Chloe walks in and asks why Shelby is in their room instead of at the farm. When Lois explains about Lois explains about Clark being secretly home, Chloe claims that she been the one feeding Shelby. Then when Lois questions how Clark has been supposedly staying in Poughkeepsie for months, Chloe points out that it sounds like she misses Clark, which Lois denines, saying it's only because she can't stand his replacement John Corben. She then goes on to say that Corben's Blur hating ways are a mystery to her because she thinks The Blur is incredible. When Lois makes a comment about how worried she is about how thin The Blur has been spreading himself, Chloe asks if she has been getting calls from him again and Lois explain that The Blur mostly only calls to talk and she thinks she is the only he can rely on. When Clark returns to the farm, Chloe is their waiting for him and fills him in on Lois's suspicions and points out that he doesn't seem to be keeping his vow to swear of human attachments when it comes to Lois. Later, Clark learns that a Daily Planet employee has been turned into a Kryptonite powered cyborg and calls Lois as The Blur to fill her in and ask her to be careful.

In "Finale", Lois still believes her and Clark should call off the the wedding and Clark considers calling it off as well. However, after Lois reads the vows that Clark had written she decides to go though with the wedding after all and after she tells Clark her vows he decides to go though with the wedding as well. As they are at the chapel about to begin the ceremony however, Darkseid begins his invasion of earth and the wedding is forcibly stopped so Clark can prevent the impending apocalypse. In the epilogue set seven years later Clark and and Lois are still together and have since been married in the intervening time.

During the crisis of infinite earths Iris West-Allen from earth-1 , Lois Lane and Clark Kent from earth-38 go to find the paragon symbol of Truth whom is Clark Kent/Superman. They find him chopping wood on his farm. They try to warm him about the multiverses being in danger and ask him to join them as well as Lex Luther trying to kill him.He dryly said he didn't know the President was in town. Before they could explain further, the Lex Luthor of Earth-38 appeared and made them disappear with the Book of Destiny, then introduced himself. Unimpressed, Clark said he wasn't Lex. Lex said no matter the universe, Superman would always be his enemy. The Book of Destiny told Lex that his true name was Clark Kent, but he believed that was only true in this universe and that the Clark Kent in his universe couldn't possibly be Superman, to Clark's amusement. Lex declared that he would kill him and every other Superman in the multiverse. Lex pulled out a piece of Kryptonite, but because Clark had given up his powers, it had no effect and Clark snatched it out of his hand and threw it into a field. Lex was incredulous that Clark would give up the powers of a god, so Clark explains that he did it to have a family. When Clark was distracted by Lois calling for him, Lex angrily tried to punch him, but Clark easily caught the punch and decked him. Lex said killing a powerless Superman would be no fun and left through a portal, saying Clark and his world were doomed anyway. Lois walked up and asked if he was talking to himself. Clark explained everything that he learned, but Lois laughed and thought he was joking. She said their daughters had just made a mess, so they joined hands and walked back into their home to deal with it.

Later, Earth-167 and all other universes were wiped out by waves of antimatter from the Anti-Monitor, leaving the seven Paragons the only survivors of the multiverse.

When the multiverse was recreated, Clark and his Earth were restored. He still lived happily married with Lois, and they have two daughters.

During the crisis on infinite earths it’s revealed that Clark Kent and Lois Lane from earth 167 (Smallville) have two unnamed daughters. They are killed when the multiverse are destroyed but are restored when the multiverses are recreated and are living happily with their parents.

The Clois ship sailed as early as her introduction in the season 4 premiere "Crusade" due to the natural desire to see the iconic Superman couple in the show, helped by the fact that their first meeting has Lois see Clark completely naked. However Chlark was more popular with the Smallville fandom specifically due to the three seasons prior of characters interactions and fan preference for Chlark over Clana. This changed over time due to Chloe getting canon love interests in Jimmy Olsen and Oliver Queen and Clois being heavily foreshadowed throughout seasons 4-7 and the couple slowly becoming canon in season 8. While Chlark still had a sizable fanbase in the final few seasons and well after the series ended, by the time season 9 began Clois became the most popular ship for both Clark and Lois. 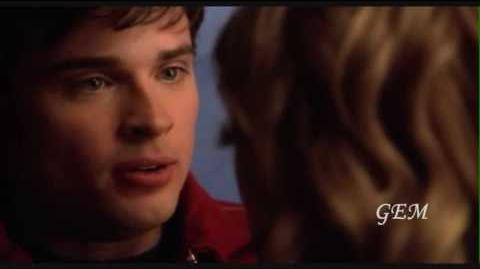 Retrieved from "https://shipping.fandom.com/wiki/Clois?oldid=202196"
Community content is available under CC-BY-SA unless otherwise noted.