Cloqwork Orange is the polyship between Qrow Branwen, Ozpin and Roman Torchwick from the RWBY fandom.

While Ozpin and Qrow have a long-standing professional and personal relationship in canon, they have never appeared on screen together with Roman, and Roman has likely never met either of them before. Qrow met Ozpin when he enrolled at Beacon Academy, where Ozpin was headmaster. Over the course of Qrow's time under Ozpin's tutelage, he and his teammates (Team STRQ) became close confidantes of Ozpin's, and the headmaster eventually inducted them into his inner circle of trusted allies tasked with protecting humanity from his immortal enemy, Salem. To this purpose, Ozpin granted Qrow and his twin sister, Raven, a small portion of his magical power that enables them to turn into a crow and a raven, respectively, to gather intelligence for Ozpin. Qrow and Ozpin have worked closely together for decades before the series begins, and remain allies throughout the show (although their relationship grows rocky following the revelation that Ozpin withheld information about Salem from Qrow).

Roman is a major crime boss in the City of Vale (where Beacon Academy is located) at the beginning of the series, and serves as one of the primary antagonists to Team RWBY (Ozpin's students, two of whom are Qrow's nieces) for Volumes 1-3. Qrow himself has a criminal history, having been raised as a member of the notorious Branwen bandit tribe. But Ozpin convinced him to leave the tribe and reform himself during his time at Beacon. Ozpin and Qrow are well aware of the threat Roman poses, and indirectly aid Team RWBY in countering Roman's operations. Roman and Ozpin both die at the end of Volume 3, although Ozpin reincarnates into the young Oscar Pine, who later reunites with Qrow and his former students.

While the canonical connections between these three characters are slim, there are compelling parallels between them. Ozpin and Qrow share a long history with each other, as well as a rare understanding of each other, since they both describe themselves as "cursed" (Qrow because of his misfortune Semblance, which inflicts bad luck on those around him, and Ozpin because of his involuntary reincarnation which forces his soul to merge with a new, unwitting host's each time he dies). Roman and Qrow share long criminal histories that shape their characters. Qrow struggles to leave that part of himself behind (his efforts made more difficult by Raven, who takes over leadership of the Branwen tribe after he leaves) while Roman embraces his criminal lifestyle and has no interest in redemption. Roman and Ozpin share the similarity of both leading organizations that operate in the shadows—Roman leading his crime syndicate and Ozpin leading his inner circle. In this way, they are both secretly very influential figures in the City of Vale, Roman from the criminal underworld and Ozpin high above the clouds from his Beacon clocktower office. While they are on opposite sides, Roman is disaffected with his role in Salem's plot since he is kept out of the loop and he sees little benefit to himself in the end. And Ozpin and Qrow are painfully aware of their own flaws, which prevents them from thinking of themselves as the heroes of the story.

Cloqwork Orange is a newer, niche ship in the FNDM, only named in 2019. It would be considered a rarepair, if it were between two characters instead of three (in fact, the addition of the third makes it even rarer). It is a variant on the older and larger Cloqwork (Ozpin/Qrow) ship, and the two share significant overlap in terms of content and shippers. Cloqwork Orange adds a fun rivalmance/enemies-to-lovers element to the classic Cloqwork ship, which features a lot of fluff and angst. It also tends to cut the typical fluff/angst Cloqwork dynamic with a very different element, since Roman is unapologetically not a good person. Ozpin, Qrow and Roman are neither archetypal heroes nor evil villains, which creates the opportunity for mutual understanding somewhere in between.

The ship's concentration on secondary characters, early-series/deceased characters and antagonists tends to go hand-in-hand with a certain level of disregard for the current canon. The Cloqwork Orange ship arose in part from resentment over Ozpin's and Roman's early deaths, and the way their legacies (as well as Qrow's character) have been handled in the show since. Cloqwork Orange almost by definition tosses post-Volume 3 canon out the window in order to focus more on these three underserved characters. That said, Cloqwork Orange shippers tend not to take it too seriously, and are much more interested in just having fun with the characters and their relationship than leveraging the ship for the purposes of critiquing canon. Fan bitterness is just one of many more positive elements that can be baked into the ship, which at its core comes from a love of all three of the characters.

Cloqwork Orange verges on being a crack ship because of its unexpected convergence of characters, but it has a devoted, if small, following, even earning OT3 status among some. The ship is sometimes affectionately referred to as "the disaster triangle" because of the characters' vast potential for creating chaos (Qrow with his back luck Semblance and generally poor life choices, Ozpin with his well-meaning yet Machiavellian machinations, and Roman with his blatant criminal activity and contempt for authority). The chaos and unpredictability of the ship is part of its appeal. The show itself focuses heavily on morality, righteousness and heroics, while Cloqwork Orange gives shippers a break from the heavy source material to explore characters and relationships that don't focus on those concepts as much (except where they provide points of tension between the trio). Cloqwork Orange blurs the line between "good" and "bad" to let the characters explore both sides of themselves, and discover that they are all only human. 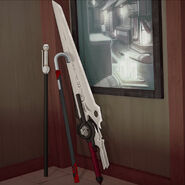