Friends/Co-workers; Both are dead

CloudNight is the het ship between Oboro Shirakumo and Nemuri Kayama from the My Hero Academia fandom.

Nemuri and Oboro were both students at U.A., Oboro being a 2nd year student and Nemuri being a 3rd year. Oboro was eating lunch with two of his best friends, Hizashi Yamada, and Shota Aizawa when Nemuri suddenly jumps onto the roof and tells them that eating on the roof was prohibited.

But after they discussed her "revealing" hero costume, that Oboro didn't mind seeing her in while acting positive towards Nemuri about it, she offered to help take care of Sushi, the stray cat Oboro had found on his way to school, but ended up leaving with Sushi and made the cat hers. After this encounter, she was considered a friend to Oboro. Which is why he asks Hizashi and Shouta if they can include her in the Hero Agency they hope to start up after they graduate as heroes.

The next time they two saw each other, where she quickly shows Oboro and his friends a short video she had taken of Sushi pooping, before Nemuri offered Shota and Oboro a spot to intern at the Purple Highness' Purple Revolution Agency, the hero agency she was interning at. Under the Purple Revolution, where they were made members of Team Purple and worked together to take down a robber villain, Oboro Shirakumo was hit in the head by the building's rubble and was killed. As he had used a large amount of his cloud Quirk to protect children from falling rubble, but wasn't able to protect himself. Nemuri was saddened by Oboro's death and continued to look after Sushi on his behalf.

Once All For One heard that a U.A student with a promising quirk had died, he got his hands on Oboro's corpse and had it turned into the Nomu, Kurogiri, to look after Tomura Shigaraki. As for Nemuri she became the pro hero, Midnight, before becoming a teacher at U.A. beside Oboro's best friends. Who later discovered what had happened to Oboro's body. Midnight helps her fellow heroes to attack the very hospital Oboro's subconsciousness was able to inform Shota and Hizashi of, but gets killed when she tries to stop a rampaging Gigantomachia. Nemuri's students mourn her in the same way that Shota mourned Oboro that fateful day.

CloudNight is a rarepair. The ship began in My Hero Academia Vigilantes series, where it introduces Oboro Shirakumo and shows Nemuri's student days at U.A with Oboro and his friends. Because of the way Oboro acted around Nemuri, fans began to assume that he might have had a crush on her. Which is why fans rival CloudNight with EraserCloud. Along with fans adding Midnight to EraserCloudMic group fanart, whenever they ship CloudNight beside EraserMic. On AO3 the ship has only 19 fanfics, along with it having a small fanbase on Tumblr.

A few AUs of the ship, that can have Oboro and Nemuri end up together, feature Oboro surviving the tragic event that took his life, or have Oboro's U.A friends finding away to free his consciousness from All For One's hold on Kurogiri. Since Nemuri also knew Oboro, who considered her a friend and is helping Shota Aizawa and Hizashi Yamada to take down the villains who turned Oboro's corpse into a Nomu, fans believe that the two might have informed her of what became of their friend and how his subconsciousness is still there.

Oboro's Relationship with Nemuri on the My Hero Academia Wiki 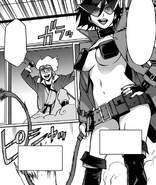 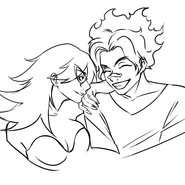