• Enemies to Lovers on Fanlore
• Enemy Mine
• Save the Villain

“I got you!”
— Barry saving Snart's life

ColdFlash is the slash ship between Snart and Barry from the The Flash fandom.

Leonard and his team pull a heist on a truck transporting a diamond, when Barry gets an alert about it. He puts on his Flash suit and goes to stop it, knocking Leonard away and causing his mask to come off. One of the men shoots the driver and they're able to get away. While investigating with the cops Barry tells Joe that he saw the face of one of the robbers and has him look through the profiles of known criminals to find who it was. He quickly finds it and comments on how bad his name is. Almost as bad as Bartholomew. Joe explains that Leonard shows up, does a job and gets away since he cases the whole thing.

One of Leonard's men tell him about the rumors of the streak. He looks over the surveillance footage, observing what he can see. He tells them that no one should have been fast enough to stop them, but something did. He knows the streak is someone and it's time to up their game. During trivia night Barry is alerted of Snart's robbery. He runs there just in time to save Joe, but gets caught by Leonard's cold gun. He decides to test how fast Barry is and starts shooting at civilians, Barry getting to them just in time. He shoots at one more person, but Barry doesn't make it in time. Leonard is able to get away again. He realizes how much the cold gun affects the streak and rob's the museum of its diamond.

Barry gets word of the robbery and that Leonards was spotted at the train station. Leonard gets onto the train, and Barry is able to race on. Leonard points the gun at him. Barry says he should have gotten on something faster than the train, but Leonard didn't want to get away just yet, and freezes the train wheels, causing it to fall of the track and Leonard to get away. He's able to get everyone off of the train in time, and falls down in exhaustion, only for Leonard to show up behind him and shoots the cold gun at him. He thanks Barry for forcing him to up his game, with both the gun and the way he thinks. Cisco then shows up behind him with a device claiming it to be a prototype cold gun. Leonard comments on who Barry was talking to the whole time. Cisco threatens him again, and Leonard takes the gun off of Barry. He lets him know he'll see him again and walks away.

“Who knows, maybe that's why we get along. You see the good in me; I see the bad in you”
— Snart to Barry

Barry – “Lisa was safe. Why did you do that?”
Snart – “He broke my sister's heart. Only fair I break his”
— Snart after killing his father

“Your goodness is your strength”
— Snart[1] 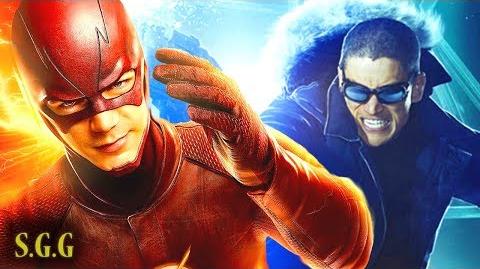