Legends of Tomorrow
The Flash

• Anti-Heroes
• Battle Couple
• Heterosexual Life Partners
• Go Through Me — how they met as Mick protected Snart
• The Lost Lenore - Leonard to Mick after he dies
• Opposites Attract
• Outlaw Couple
• Reckless Sidekick — Mick is this to Snart at times, in the beginning

Coldwave is the slash ship between Snart and Mick from the Arrowverse fandom.

Mick and Leonard first met in Juvie when several older kids were beating up a 14 year old Leonard. One pulls out a shiv but Mick stops them, beating them up. They've been friends ever since.

Mick and Leonard were working a job, before the particle accelerator explosion. The job went wrong and half of Mick body was burned. This caused a falling out between the two.

When looking fro new equipment to go up against The Flash, a janitor from S.T.A.R. Labs offers to sell Leonard first a flamethrower, then a cold gun.

After Leonard goes up against The Flash, he tracks down his old partner, Mick, with an offer. He tells Mick that he needs to step up his game and in order to that, he need his partner back. He gives Mick the flamethrower, and Mick says he's in.

REVENGE OF THE ROGUES

Leonard freezes the door to a garage, and Mick drives through it. Once inside, the two step out of the car, Leonard commenting that he told Mick it would break. Mick asks where they are, and Leonard tells him that it's a warehouse for cars that are all worth a fortune. Mick asks how they're going to drive them all out of there, but Leonard says that they're not stealing anything. Mick asks what he's talking about, and Leonard explains that the silent alarms were tripped, and that the cops will be there soon. Mick says to bring them, and pulls out the case for his heat gun. Leonard reminds him that it's not for the cops, but The Flash. Realizing that The Flash isn't coming, Leonard decides it's time to leave. Mick tells him that things better start making sense, and Leonard assures him they will. They get in the car, and Mick reminds Leonard that he made him a promise, and Leonard assures him that he'll keep it. They back out of the garage and get away.

Revenge of the Rogues

❝You’re my best friend. I love you man.❞
— Mick talking to hallucination Leonard

❝The reason Snart and I got on so well was... well, we... we trusted one another. We were friends. We had each other's backs.❞
— Mick to Stein about Leonard

❝Mick, Mick, Mick, when have we ever destroyed anything we’ve ever stolen. Let alone the most valuable score in the universe. What have they done to you?❞
— Past Leonard, Fellowship of the Spear 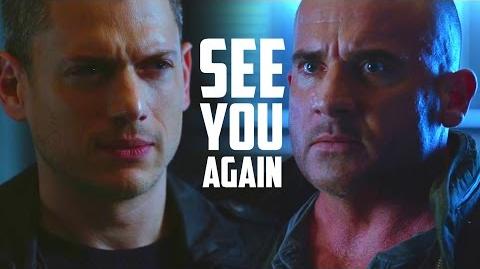 Retrieved from "https://shipping.fandom.com/wiki/Coldwave?oldid=149750"
Community content is available under CC-BY-SA unless otherwise noted.