ConnorKyleWally is the poly ship between Connor Hawke, Kyle Rayner and Wally West from the DC Comics fandom.

Three of a Kind

Connor and Wally are waiting on the watchtower, Wally complaining about Kyle being late. Connor tries to defend Kyle, just as he arrives. Kyle and Wally immediately start to argue, but Connor buts in and tells them to stop. They're going on vacation and asks if they can stop fighting during that time. The two agree to, and head off to hit their cruise.

They end up missing the boat, and Kyle points out that Wally could have gotten them there on time. Wally reminds him that they agreed no superheroing on vacation, but Connor says that they better do something or they wasted all their money. Kyle then constructs a platform so they can sneak onto the ship. They get caught by the cruise director, but are able to provide proof that they're supposed to be on the ship. Kyle tries to flirt with her, but she's more into blondes, so she flirts with Connor instead. Wally's confused and Kyle just tells him to get used to women just falling all over Connor. Connor thinks it's something he inherited from Oliver, and Kyle jokes about it being a pheromonal thing. Wally just tells him to stay away from his girlfriend.

When the three go into the bar, Kyle asks if Connor's been with a woman yet. Connor thinks he has, but Wally says that if he wasn't sure, then he wasn't doing it right. Connor says that the woman might have been a ghost and Wally and Kyle demand more details. Connor just says it seemed that way since she was gone in the morning, but Wally says that happens sometimes. Connor clarifies that the entire city he was in disappeared along with her. Kyle mentions his first girlfriend, and asks Wally about his. Wally just gives a name, and that he doesn't kiss and tell. Connor says he's more a kiss and run type, which Wally is shocked by, but Kyle finds hilarious. Hatchet and his cronies then tells them to get out of "their" seats, and before Wally can start a fight, Kyle and Connor pull him away. The three then realize who the three are and decide that they have to take them out before any civilians get hurt.

The three confront Sonar, Heatwave and Hatchet, but Sonar threatens to destroy the boat, and that the three couldn't save everyone. The three then share a look and all agree to stand down.

ConnorKyleWally is a very rarepair in the DC Comics fandom, even among Green Lantern, Flash and Green Arrow fans. This is due to the limited interactions between the three, and most of their interactions happening pre-modern comics. Many who are fans of this ship, or just the three as a trio, are hoping to see them interact again in the current continuity. 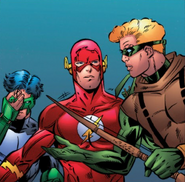 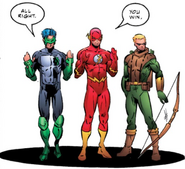