View source
watch 01:55
Cobra Kai Season 4 - The Loop
Do you like this video?
Play Sound
WOAH! THAT'S ONE SMALL SHIP!
• THIS ARTICLE IS A STUB. YOU CAN HELP BY EXPANDING IT •
Stub pages are deleted after 4 months and if not filled out enough, Crashadena will be deleted
{{{1}}}

One-sided crush on Pasadena’s side

Crashadena is the het ship between Crash and Pasadena from the Crash Bandicoot fandom.

The player, in control of Crash, can freely interact with Pasadena at will in the main hub world for multiple responses. It is shown that Pasadena has a crush on him, openly stating that he is “cute”. Crash also willingly completes tasks for her, such as finding the starter and coins to her Bad Girl and giving her enough money to buy the Le Chaux. Pasadena uses this time to openly flirt with him. She shows an interest in wanting to kiss Crash and openly expresses her intentions to do so. She even exclaims in one of her victory quotes that she wants to have a 'shotgun wedding' with him.

Crash, meanwhile, will usually either back away or act as if he is about to vomit. This may suggest he does not reciprocate any feelings for her. However, in one particular reaction, he begs like a dog to her which could suggest otherwise, or as a sign of him considering her attractive. Outside of overworld reactions, Crash and Pasadena are shown to get along normally without any evidence of Pasadena’s apparent feelings. This could at the very least suggest that they do consider each other as friends.

“Hey there Furry Buns, don’t suppose a gentleman like you can help a little lady out?
(Crash begs like a dog while panting)
I’ll take that as a yes, I suppose. My car here seems to be on the fritz. Some no-good-nick stole the starter! If you find it, bring it back to me, OK?”

“Hey Crash, I don’t want to start picking out curtains or nothing, but I think you’re a cutie.”

“Well Golly, Crash you sure are a sweet pickle. Now I’ve got once again a chance to beat those sneaky Cortexers maybe I should give a little up close reward.”

Despite Pasadena’s minimal game appearances, Crashadena is a popular ship among most Crash Bandicoot shippers and for both characters. Even at the time of Crash Tag Team Racing’s initial release, the ship became popular among the community pretty quickly. Fanart and fanfiction of the couple is incredibly common, especially from the early to mid 2010's when the popularity of the ship was at its peak. The ship was re-sparked in the community following Pasadena's reintroduction to the franchise in Crash Team Racing: Nitro-Fueled.

Crashadena rivals CrashxTawna as Crash’s most popular ship. This is due to how Tawna Bandicoot was created initially to be Crash’s love interest before she was dropped, and then how Pasadena directly flirts with Crash. This has led to friction between fans of Pasadena and fans of Tawna over who should be Crash's boyfriend. Fortunately, it is not as toxic as many of the Sonic the Hedgehog ships, for example. Furthermore, fans of Crashadena tend to ship Tawna with Pinstripe.

There are over a thousand search results for 'crash and pasadena' on DeviantArt alone, where one of the most noteable fanartists for the pairing is HarmonyBunny. They are an avid shipper of the pairing, having made up the majority of artwork available, although the name Crashadena was coined by their friend Clok-Roo. 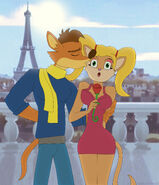 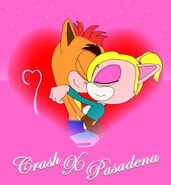 By Clok-Roo
Community content is available under CC-BY-SA unless otherwise noted.
Advertisement