Cyborgbunny is the het ship between Genji Shimada and D.Va from the Overwatch fandom.

Hana "D.Va" Song is a pro gamer, turned mech pilot. She protects her home country of Korea from giant omnics that come out of the sea to attack Bussan.

Genji was the second son of the Shimada Clan. He lived a carefree life, till his father died, and the Clan elders encouraged his older brother, Hanzo, to put an end to it. Hanzo confronted his brother, and eventually it turned violent. Hanzo severely injures Genji and believes him to be dead. Hanzo ran from his home, while Genji was found by a Blackwatch team. He was treated, becoming a cyborg and joined Blackwatch till it was disbanded. He went journeying and joined up with Omnic Monks, where he learned to control his anger. He eventually goes to meet his brother again, hoping to help him find peace with what he did.

The two have never met in Overwatch lore. Although several dialogue interactions indicate that they would have a common interest in Video games.

In Heroes of the Storm 2.0 - Hanamura Showdown Genji is fighting Diablo when D.Va shows up to help him.

The two are both part of Overwatch's standard dive composition.

A smaller pairing, most ship the two with other people. This is due to there being no confirmed connection between the two. Although there shared map dialogue did lend itself to shippers.

Those that do ship it base it more on their one common interest: Video Games. Fan art typically has the two playing video games together, or separate but in the same room. Some believe that the two would have gotten along much better when Genji was younger. Some believe that D.Va would bring that side out in Genji. This is more based on their Hanamura interaction, where Genji is proud of his scores before finding out D.Va beat them all. 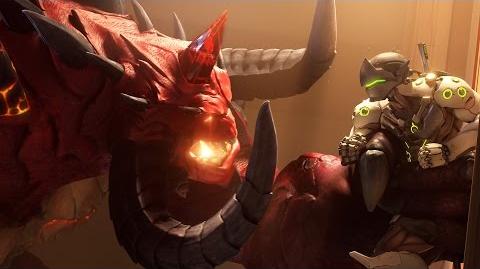 Heroes of the Storm 2.0 - Hanamura Showdown

Retrieved from "https://shipping.fandom.com/wiki/Cyborgbunny?oldid=134781"
Community content is available under CC-BY-SA unless otherwise noted.