Shipping Wiki
Register
Don't have an account?
Sign In
Advertisement
in: Ships, Ships/Familyships, My Hero Academia/Ships,
and 5 more

DabiTodo is the family ship between Toya "Dabi" Todoroki and Shoto Todoroki from the My Hero Academia fandom.

Both Toya and Shoto are the sons of Enji Todoroki and have their own unique fire quirks, with Toya having a quirk that is more powerful then their father's while Shoto is a hybrid quirk of both ice and fire, the ideal quirk their father was aiming for when he decided to perdus a successor to become the number one hero in his place. Before Shoto was born, Toya was going to be their father's successor and enjoyed the times he shared with Enji when he trained him, but that all changed after Shoto got his quirk and Toya got cast aside by Enji, before the abuse he inflected on both brothers during the training began. Even though their mother's genes is the reason why Toya's quirk causes his body harm whenever he uses his flames for too long, he misses the attention that Enji is now giving Shoto. The youngest Todoroki, however, doesn't want it because of the abuse and their father wanting to keep his successor child away from Toya and other the older Todoroki children who Enji has deemed as failures, but that hasn't stopped Shoto from watching Toya play with Fuyumi and Natsuo from afar and longs to join them. At some point in their childhood, Shoto gets told that Toya died in a fire when he tried to train on his own and only his lower jaw bone was found.

Even though both Toya and Shoto ended up hating their father for what he did to them, Toya's hatred turned him into the villain Dabi after he "died" and wants to put an end to heroes in general, while Shoto looking up to All Might has him wanting to become a hero despite the feelings he has for their pro hero father. Years later, and shortly after Shoto helped his friends take on the hero killer villain that Dabi looks up to and wishes to continue his mission, Dabi joins the League of Villains.

The first time that the two meet face to face as villain and young hero-in-training was in the Forest Training Camp Arc, where LoV attacked Class 1-A and Dabi uses his flames to trap Bakugo in order to make him a hostage inside a pearl that was a container for immobilize and leave their victims still to prevent them from escaping. Before Shoto could save Bakugo that was trapped inside the container, Dabi quickly snatched it away before Shoto could catch it and then says to him: "That's sad... Shoto... Todoroki" before Kurogiri sends Dabi and the rest of the League to the safety of their hideout. Shoto, along with Izuku, Shoji and Tokoyami then gaze upon the damage that Dabi caused to the forest in horror. Because Dabi had dyed his white hair to black, is covered in burn scars and with Enji keeping Shoto far away from Toya when he was very little, he had no idea that Dabi is in fact his "dead" older brother. He did, however, leave an impression on Shoto that night and seeing Dabi on the news gets the youngest Todoroki to remember their first encounter in the forest.

When Shoto was born, Toya felt far from his family, specially his father who had all his attention on Shoto, and so he attempted on attacking him by flying towards where Shoto was, on Rei's arms, while telling Enji to look at him.

Long before Dabi finally revealed his true identity as Toya Todoroki, fans had expected this ever since Dabi addressed Shoto by his full name, also with having a fire quirk and with both of them having Enji's teal colored eyes. A few of the earlier "Dabi is Toya Todoroki" theory fanwork has Toya wanting to save Shoto from their abusive father and had found times to spend a few moments with his little brother, as Toya helps him to see that fire isn't scary, just be someone that Shoto can talk to or simply serve as the shoulders for both of them cry on whenever either of the two have gotten by Enji. These ideas are mostly based on the times Toya is said to have spent with Natsuo whenever he turned to him for support, and fans believes that Shoto might have done the same with his oldest brother before his death. Darker versions of the theory, have Dabi wanting to ask All for One to steal and transfer Shoto's hybrid quirk into him in order to harm their father. While the earlier fanon reveals of Dabi's reveal as Toya has him wanting to either keep Shoto out of the villain world or wants his brother to join him in his war against Endeavour, asks Shoto to not tell their family of what he became or has Shoto wanting to save Toya from himself. Even though Dabi revealing his plans to harm Shoto disproves these older theories of Toya caring about Shoto, unless future chapters in the manga has Shoto wanting to bring Toya home for Fuyumi and the rest of their reconnecting family.

Some None-Villain Dabi AU's has Toya becoming a pro hero like their father, so Shoto can have someone else to look up to. There are also a few Todoroki Family AU's that have Shoto being allowed to play with Toya in a much happier childhood with a kinder Enji, who places their family over his own goals a lot sooner than he did in the manga. Because both Dabi and Shoto commonly use their fire quirks on one side of their bodies, some believe that Dabi might also have an ice quirk like Shoto's but has yet to uncover this.

Some fans believed that Dabi's reveal between him and Shoto would possibly minor the famous reveal scene between Darth Vader and Luke Skywalker. While others thought the two would end up recreating the fire duel between Zuko and Azula, since the Todoroki brothers and the colour of their flames aren't very different to royal Fire Nation siblings and their fire. It isn't uncommon for hero characters like Shoto to have blood ties will one of the villains he and his friends fight or encounter from time to time. That trophy is one of the reasons why fans are drawn to Shoto and Dabi every since the theory of them being brothers began in the manga.

Those who didn't think that Dabi is Toya, due to the way Shoto didn't recognize his own brother in the Forest Training Camp Arc, has got a small group of fans ship them romantically. Which is why those fans called this ship "DabiTodo" than something like "ToyShoto" or "Shotoya" and AO3 has 213 slash fanfics under the Dabi character tag and three fics (under Dabi) placed under pairing in the My Hero Academia category on FanFiction.Net, along there being fanart of Dabi being "interested" in Shoto, like the way Hisoka fancies Gon from Hunter x Hunter. The fanon slash side of the ship isn't as poplar as the familyship side of it, even though fans have depicted them as brothers long before Dabi finally revealed himself as Toya in Chapter 290. The antagonist relationship between the two brothers has inspired a few fans to view DabiTodo as the Todoroki family ship version of ShigaDeku.

On AO3, the ship has 337 family fanfics under the Toya tag and 714 under the Dabi character tag, while FanFiction.Net has 94 fanfics under Dabi and only 30 under Touya. Along with both Tumblr and Deviantart having a large amount of fanart images of Shoto with his oldest brother. Some of that fanart is a redrawn or colored in version of their first encounter in the manga. 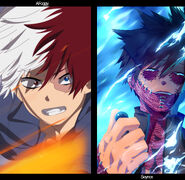 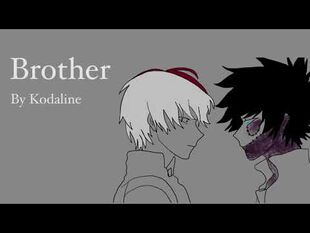