Daisugi is the het ship between Kotoko Utsugi and Masaru Daimon from the Danganronpa fandom.

While the relationship between the two is rarely highlighted, they appear to be on relatively friendly terms, although they occasionally bicker with each other. Towards the beginning of the game, the two can be seen playing "zombie" with the corpse of a news reporter, along with fellow Warrior of Hope, Jataro Kemuri. While the group's true leader, Monaca Towa, is making an announcement to the rest of Towa City, Masaru can be seen playfully chasing Kotoko in the background. Later on, when Masaru introduces himself to Komaru Naegi, he boasts about his position as the group's leader. Although Kotoko scoffs that all he did to earn that title was win a game of rock-paper-scissors, which makes Masaru throw a tantrum.

At the start of Chapter 2, the Warriors of Hope all hold a funeral for Masaru after his defeat and apparent death. Kotoko mourns Masaru, even though she remembers him as a perverted idiot, she stills thinks of him as a good person. She also recalls times where Masaru fixed various items, although Jataro pointed out that he was the one who did that, but Kotoko mostly ignores him. When Monaca pretends to cry over Masaru, Kotoko joins her, saying she wanted to play with him. Kotoko and Masaru are also depicted as Cinderella and her prince, dancing together in one of Jataro's art displays.

The two act as the main antagonists of the in-game novella, Ultra Despair Hagakure. In Chapter 3, Kotoko ambushes Yasuhiro Hagakure and Kanon Nakajima, but Kanon manages to subdue her, and begins prodding her for information. Suddenly, Masaru appears to help Kotoko, forcing Yasuhiro and Kanon to retreat. Masaru yells out that he will kill them the next time he sees them, but Kotoko argues that she has to be the one to defeat them. Masaru laughs and says she is one to talk, due to her needing his help, and Kotoko calls him insensitive.

“He always acted all big, and was a perverted idiot, but... he was a pretty good person. I remember the time he fixed the air conditioner, and even the chairs and tables, too...”
— Kotoko mourning Masaru after his "death."

“Waaaaaaaaah! Oh, Masaruuu! Why, why, why!? I wanted to play with youuu!”
— Kotoko pretending to cry over Masaru's "death."

The ship sailed as a result of the subtle ship tease between the two. The side material, Ultra Despair Hagakure featuring them as the only antagonists out of the five Warriors of Hope and helping each other also helped. So did the scene where Kotoko mourns Masaru after his "death", even though it wasn't completely sincere. 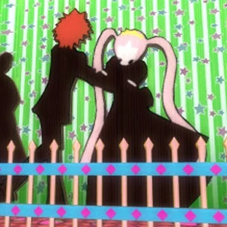 Warriors of Hope refers to the ship between the two, Jataro Kemuri, Monaca Towa, and Nagisa Shingetsu