DamiJon is the slash ship between Damian Wayne and Jonathan Kent from the DC Comics fandom.

Though they may bicker and disagree, Damian and Jon became best friends and always have each other's backs. In fact, Jon is the only person who really bring the kid out of Damian. They're close enough to have each other on speed dial and to buy gifts for each other (with Damian buying the two of them a video game they both wanted).

In "In the Name of the Father", they both initially did not get along and it became further complicated when Batman and Superman arrived. They immediately blame each other for the torching some woodlands caused for Jon. When they went off to look at Damian's pets, Damian's sarcastic and provocative comments made Jon lost his temper and another brawl broke out between them. It was ended quickly when their fathers looked down on them in furious silence. The boys finally managed to put their differences aside and worked together to save their parents from an apparent threat in the Batcave, but this turned out to be a ruse.

In "Super Sons Vs. Kid Amazo", Jonathan was paid a visit by Robin, posing as both his school's bus driver and his substitute teacher. He was later unwillingly recruited by Damian to help him investigate a series of break-ins at LexCorp. After Lex Luthor appeared and tried to capture them, Damian even used Jon as a distraction to get information about the Amazo Virus. Jon stayed angry with him, but soon forgave him. After a fight against Reggie Meyer and being saved by Reggie's super-powered sister, Robin and Superboy quickly left the area so they didn't have to explain themselves.

The fans started to ship them mainly, because of their interactions in the "Super Sons" comics. Comparison with the cliché of many romance stories about a couple who argue with each other ends up blooming a love between them is inevitable. The ship started to lose some fans with Jon's time skip age up and Damian remaining fourteen. The two have spent less time together since then although still do occasionally team up and consider each other best friends still. The ship still didn't gain many fans in that time though since both Jon and Damian got new love interests. 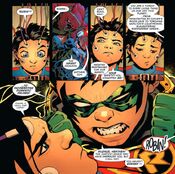 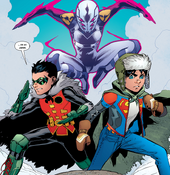 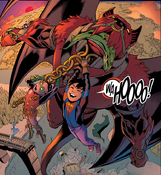 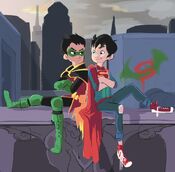