Danbeau is the femslash ship between Maria Rambeau and Carol Danvers from the Marvel Cinematic Universe fandom.

As Vers regains a memory of herself walking out of an air force base. A woman comes up behind her and asks where her head is at. Vers says it's in the clouds, and Vers asks where's hers. The woman says it's on her shoulders, and is ready to show the boys how they do it. She asks if Vers' ready, and Vers responds with "Higher, further, faster" as they head to their jets. Vers then gets more flashbacks of herself and the woman at a bar, singing kareoke and playing arcade games. She then gets another of herself and a child looking up at the stars as the women calls the two in for dinner. Vers takes the kid and "flies" her into the house.

While looking into "Pegasus", Vers and Fury discover a testimony from Maria Rambeau, the woman in Vers' memories. They decide to head to her home in Lousiana where they find her in a hangar. Vers says she's looking for her, causing Maria to drop her tools in shock. A girl hops out of the plane, calling Vers "aunt Carol" and runs to hug her. The girls says that she and Maria knew everyone was lying about Carol being dead, but Carol doesn't know what she means. Carol says she's not really who they think she is as Maria walks over to her in silence.

In the kitchen, Carol tells them everything, and Maria calls it crazy. Carol shows them her powers, impressing Monica, as Maria stares on in shock. Monica goes to get Carol's stuff, with Fury joining her, as Carol sits across from Maria at the table. Maria asks if she really can't remember anything, and Carol says that she does get flashes', but nothing else. Carol thinks if she knows what happened that morning, it would all make sense. Maria explains that Carol woke her up that morning, wanting to race to the base to test the plane's. Maria says that Carol cheated by taking a shortcut, but Carol asks how a shortcut is cheating. Maria says that it is when breaks their pre-determined rules, and Carol says she doesn't remember those. Maria says of course she doesn't, and the two share a small laugh. Maria continues, explaining that Carol volunteered to take the plane for Lawson. Maria remembers that Lawson being unique was why they liked her, but her being from another planet...Carol says that all of this must be hard for Maria, but Maria said the hard part was loosing her best friend in a mission so secret no one acknowledges that it happened. Knowing that Carol was out there somewhere and that she was showing up again after six years, being asked to be called "Vers". She asks if that's who Carol is now, but Carol doesn't know.

Monica then calls Carol into the dining room and shows her pictures of Carol with her and Maria. Halloween, Christmas, random moments. Monica remembers Carols jacket and runs to get it, as Carol finds the rest of her dog tag. Maria says that it's all that survived the crash, just as knock comes at the door. Carol tells Maria not to answer, but Maria says it's just the neighbors. Carol points out that Skrulls can change into anyone and answers the door. Maria appears behind her and tries to get the neighbor to leave. They're then interrupted by Talos, the skrull leader.

They listen to audio that he gives them and Carol gets her memories of the day back, including who took her from earth. She runs out to the backyard as everyone follows. Talos tries to get her to help his people, but Carol just yells that he doesn't know her, and she doesn't even know herself. Maria comes up to her and says that Carol is the person who risked her life to do the right thing, her best friend, who supported her as a mom and a pilot when no one else would. That she was the most powerful person she knew, even before her powers. Maria asks if she's listening and Carol nods. They then hug and cry.

As Carol gets ready to leave, Monica comes out and gives her her jacket. She gives Monica a hug and she and Maria look to each other. Carol says she's not good at goodbye's and she and Maria hug. When they pull back, Maria tells her to go on and Carol flies up to space as Maria and Monica watch.

Carol – “I don't even know who I am!”
Maria – “You are Carol Danvers. You are the woman on that black box, risking her life to do the right thing. My best friend. Who supported me as a mother and a pilot when no one else did. You are smart, and funny, and a huge pain inn my ass. And you are the most powerful person I knew, way before you could shoot fire from your fists. You hear me? Do you hear me? Come here, I got you.”
— Captain Marvel

You Gotta Be | Des'ree
Maria and Carol reunite

When the trailers of Captain Marvel were first released, many fans thought that Jude Law would play Carol's love interest in the film. This was proven false, as their's no romance in the film, and fans found themselves shipping Carol with Maria. It became one of the most prominant femslash pairings in the MCU fandom. 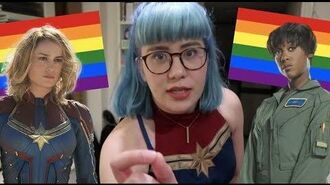 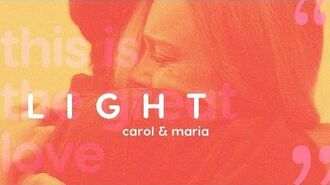